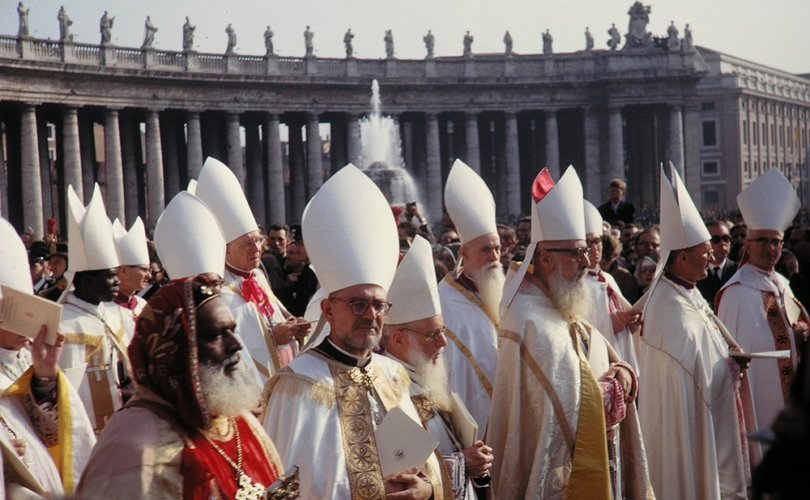 August 3, 2020 (LifeSiteNews) — It is certainly a “sign of the times” to see so many discussions today of the Second Vatican Council, most of which are much more realistic in their assessment of its possible defects than has ever been the case in decades past, when it was obligatory to celebrate the Council as a veritable new Pentecost, or at very least as a moment of rectifying the problems bequeathed by four centuries of Tridentine Catholicism. We have Archbishop Viganò to thank for re-igniting a discussion that one might characterize as “better late than never.”

Unfortunately, many of the responses published since Viganò’s piece seem motivated by a desire to “save ecclesial face.” George Weigel takes refuge in benign generalities and Wojtyłan hero-worship. Adam De Ville appeals to Volkanology to write off critiques of the Council as time-collapsing “chosen trauma.” Bishop Barron provides tidy sound-bite answers to massive questions. John Cavadini expresses sympathy with Viganò but, after cataloguing all the wonderful things he finds in the Council, simply takes refuge in Benedict XVI’s assertion that it was not the Council documents at fault, but their one-sided application or development by postconciliar theologians — not acknowledging that it was the same theologians who had drafted or influenced the conciliar documents and knew precisely what novelties and ambiguities had been lodged in them. To my mind, only Anthony Esolen and Hubert Windisch have shown that they grasped Viganò’s points: for Esolen, “the Council’s time in history has passed,” and it needs to be “de-throned,” while for Windisch, the roots of the crisis are clearly to be seen in the “re-positioning” of the Church vis-à-vis the world that was the central concern of the pastoral strategy of the Council.

Joining the discussion most recently is Fr. Thomas G. Weinandy, OFM, Capuchin, with an essay titled “Vatican II and the Work of the Spirit,” bearing the subtitle: “His has been a severe-grace, but also a beneficent-grace.” For Weinandy — whose principled stance against the deviations of Pope Francis earned him both the enmity of officialdom and great respect from Catholics concerned with the current crisis — Vatican II looks as though it precipitated a crisis because it exposed long-simmering and hidden evils, which was a necessary evil, like lacerating a boil or cauterizing a wound. For example, he writes: “It is naïve to think that so many priests, prior to the Council, were men of deep faith, and then, overnight, after the Council, were corrupted by the Council or the spirit of the Council, and so jettisoned their faith and left the priesthood.” Fr. Weinandy also claims that Vatican II set into motion many good processes and initiatives that are bearing fruit today.

To Fr. Weinandy’s point that the evils we see after the Council were present before the Council and simply revealed by the Council, I would respond:

(1) We have to distinguish among three groups in the Church before the Council. There were the corrupt, the confused, and the righteous. What was the effect of the Council on all three groups? Fr. Weinandy’s point concerns mainly the corrupt: the Council brought them out into the open. But he does not address the effect on the confused, which was to give them the impression that the way of the corrupt was legitimate. Nor does he address the effect on the righteous, which was to reduce their ability to challenge the corrupt or influence the confused. Over a very long time, Fr. Weinandy’s point may hold — namely, that it was a grace to expose all this evil, but that is entirely compatible with saying that bringing all this evil into the open also increased the evil.

(2) One must not succumb to a subtle subjectivism. Suppose there were, all through the Church, corrupt priests thinking corrupt thoughts while they celebrated the Mass; suppose their celebration of the Mass was subjectively bad, although outwardly good. It is in fact a worse evil to have their Masses also outwardly bad. That is to say, adding the corruption of visible ritual is in fact the addition of an evil. It would be like having lots of people who inwardly crave to be mass murderers (pun intended) and then act on their cravings: the net amount of evil does not remain the same just because intentions have not changed.

To Fr. Weinandy’s list of positive fruits of the Council, I would respond:

(1) Some of his list is true, because God always brings good out of evil. This covers, for example, the fact that imploding religious orders made way for new and better ones.

(2) Some of his list is true, because in fact the Council was not all bad. In the great scheme of things, I expect that John Paul II’s pontificate will bear more theological fruit for the Church than the Council itself, but Fr. Weinandy is probably right that the Council was a condition of his election.

(3) Some of his list is not quite true, because there were many good fruits germinating in the Church before the Council, and the Council echoed rather than squashed them. This is a key point: if Fr. Weinandy wants to say the evils already present but exposed after the Council cannot be attributed to the Council, then he will have to say the same for the goods that follow the Council. Not all good things that happened after the Council can be attributed to it; this would be a case of the same post hoc ergo propter hoc fallacy that anti-traditionalists love to hurl at traditionalists! For example, the renewed use of Scripture in theology and the renewal of patristics were well underway before the Council and can be readily seen in the work of many theologians who, translated into today’s ecclesiastical scene, would no doubt find themselves most at home among the traditionalists.

In short, Fr. Weinandy has overstated the case for keeping the Council relevant to the daily life of the Church.

I would not subscribe to the view that the Council should be “forgotten” as though it never happened. That is not how history works. Rather, it must be remembered with shame and repentance as a moment in which the hierarchy of the Church, to varying degrees, surrendered to a more subtle (and therefore more dangerous) form of worldliness. Moreover, the errors contained in the documents, as well as the many errors commonly attributed to the Council or prompted by it, must be drawn into a syllabus and anathematized by a future pope or council so that the controverted matters may be laid to rest, as former councils have wisely and charitably done in regard to the errors of their times.

Just as Viganò has exposed the Vatican’s and much of the hierarchy’s complicity with evil in the case of Theodore McCarrick, so too he has turned a bright light on the doctrinal and liturgical evils that plague the Church because of the orientations, decisions, and texts of the Council. He must be taken seriously. It’s no longer enough to point to some nice things Vatican II said, or some good things that have happened in the past half-century. We know that already. It’s also more than a bit silly at this point to say, “You know, the Church wasn’t perfect before the Council,” as if anyone asserted that it was.

Most of those who have “responded” to Viganò have, to varying degrees, walked right past the most important questions. It’s as if they’ve arrived very late to a party where an in-depth conversation has been going on for a long time — in this case, ever since Dietrich von Hildebrand’s The Trojan Horse in the City of God and Romano Amerio’s Iota Unum, down to Henry Sire’s Phoenix from the Ashes and Roberto de Mattei’s The Second Vatican Council: An Unwritten Story — and they burst in with observations that were taken up and thrashed out hours before. After an awkward pause, the conversation resumes among the serious participants, while the interrupters stroll away for a cocktail, feeling satisfied that they’ve “made their point.” Alas, it was beside the point; it didn’t advance the discussion, but merely interrupted it.

What cannot be denied by any objective evaluation is that, between 1962 and 1965, there took place a “paradigm shift” with regard to the intimate relationship of identity, continuity, tradition, and culture. These were dissociated in a way that was radically uncatholic — and radically unstable.

Just as I completed this article, my attention was drawn to Fr. Serafino M. Lanzetta’s “Vatican II and the Calvary of the Church” (Catholic Family News, August 3). I highly recommend it as one of the best interventions in this debate yet to be published — an example of the kind of intervention, the nuanced handling and depth of thought, called for by the gravity of the subject.

Correction 08-24-2020 09:34 EDT: The name of the priest in the above paragraph has been corrected. LifeSite regrets the error.