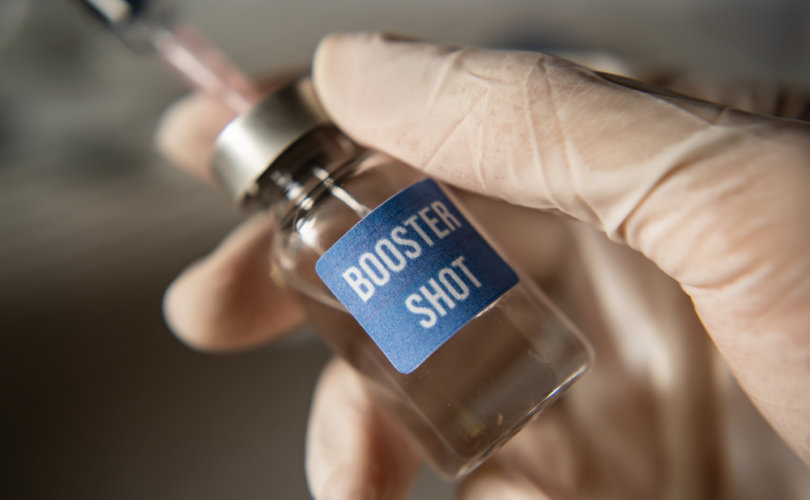 (LifeSiteNews) — As the hysteria around the dreaded delta-doom wanes alongside the effectiveness of the jabs, the omicron variant has been unleashed on a morally destabilized populace.

Granted, the new brand of COVID does not appear to be anywhere near as serious as any previous version — even legacy media and governments have begrudgingly admitted as much. Nonetheless, in a world where CNN-addicted citizens wait for new variants to drop like a new track from their favourite musician, any reminder of the virus ropes in the terrified masses.

Millions — perhaps billions — of people worldwide are convinced that the “novel” coronavirus will inevitably defeat their antiquated immune systems if they do not receive a boost from Big Pharma. Knowing this, it seems that governments around the world are jumping at the chance to secure a supply chain of boosters to appease their jab-dependent citizenry.

Ironically, this is happening as supply chains for other things are facing collapse.

The news of what seem like never-ending boosters is not welcome by all who accepted the first set of jabs. Not a few people took the first round of shots believing that they would get their freedom back. Canadian psychologist Jordan Peterson is one of those people, as he believed the Canadian government would leave him alone after receiving the jab.

As governments are beginning to tell the fully jabbed that they will soon be cast down to the rung of unvaccinated, it is clear that as long as the booster narrative persists, no one will be left alone. We might take a bit of solace in this fact, however, as it might actually unite the vaxxed and the unvaxxed; one thing they will both share in common is that they will never be truly vaccinated.

You do not even need to research any of the literature to know this. It is practically impossible for an unvaccinated person to cross international boundaries at all, and if they can, it is because they have produced a negative test in order to do so. On the other hand, the fully vaccinated can travel almost like it’s 2019, and they comprise the vast majority of international travelers … If a new variant comes to an ICU near you, then you can almost guarantee that it came by way of the upper echelon of the vaccinated elite.

A few months ago, stories of the vaccinated transmitting the virus were deemed “conspiracy” or “misinformation” and you might have had your Twitter account deleted for peddling such gobbledygook. However, as the two weeks to slow the spread approach the 22nd month, Emperor Fauci and the CDC admitted in a press release that Omicron traveled to American shores by way of a vaccinated individual.

Never letting a good crisis go to waste, Dr. Fauci insisted the poor soul that experienced “mild symptoms” — you know, sniffles, a headache, and a tickly throat, which used to be called a “cold” — was not protected enough because … you guessed it, he was double jabbed but not triple jabbed!

Patient zero of the American omicron drama was simply not jabbed enough, and as a result our governments have valiantly volunteered to protect us from contracting a new variant that might force us to resort to such extreme measures as eating a bit of chicken soup, or perhaps swallowing an Advil or two while we take an uncharacteristic afternoon nap. The horror!

If the omicron carriers were simply vaxxed to the max, then we could all sit back and relax.

Well, as Pfizer’s Führer, Albert Bourla, told the BBC: “Based on everything I have seen so far, I would say that annual vaccinations … are likely to be needed to maintain a very robust and very high level of protection.”

There you have it, we now have a solution — all we need to do is enslave ourselves to annual boosters, and we can live a life free of mild or medium symptoms of a variant of what most would experience as a common cold.

This should not surprise us, as we already have an injection paradigm that follows this same patter: It’s called the flu shot.

If I would allow my mind to descend into a conspiratorial rabbit-hole — as fun and dangerous as that is — I might think that governments had already primed us for this with yearly flu shots.

Don’t believe me? Let’s take a look at the flu shot info page from the Canadian federal government.

In what I am sure is a complete coincidence, the information reads almost exactly like the “evolving” narrative surrounding COVID jabs.

According to the Public Health Canada, you need the flu shot:

In addition, everyone with underlying conditions is strongly implored to take the flu jab, including “people who are pregnant,” which I think means the woke bureaucrats believe that men carry babies …

Furthermore, the site says: “The effectiveness of the vaccine varies from season to season.” This is because the viruses “circulating in the population can sometimes change during the time it takes to produce a vaccine. When this happens during the flu season, the flu shot may not work as well as expected.”

It’s funny, it seems to me like they are suggesting that there are variants of the flu, and that it is impossible to adequately jab them all away. At the risk of spreading (pun intended) misinformation, that sounds like the same thing we are told about the COVID jab regarding variants.

If you aren’t sufficiently convinced that the COVID jab paradigm is becoming a lot like the flu shot ritual, the Canadian government assures you that it is. “Effectiveness of the flu shot can wear off, so you need a new one every year to stay protected.”

So, sick people need to the flu shot in order to not get really sick, but the jab won’t always be tweaked adequately for the variable variants, and the effectiveness wanes over a period of months, so you need your flu shot boosted every year … in order to protect others, even though it might not protect you, and you can still spread it.

We would be lost without the sage advice from Public Health, I bet.

Big Pharma warned us this would happen. See the following tweet wherein Moderna assures us that our COVID boosters will literally be a part of the flu shot.

As long as its double the jab, double the profits, don’t expect Big Pharma to stop boosting their record breaking cash influx.