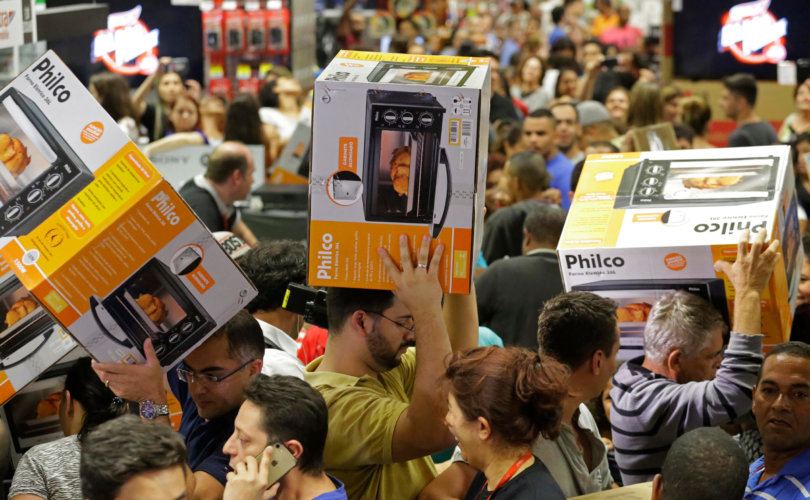 EDINBURGH, Scotland (LifeSiteNews) — My computer wants me to shop today.

Apparently Black Friday is not just the 1989 stock market crash. And it’s not just Friday that’s turned Black. The online Polish-British bookshop I sometimes frequent wants a cut of the American post-Thanksgiving shopping action in what it is calling “Black Week.”

Is it my imagination, or is there a hint of desperation about the emails pouring into my inbox from the few businesses I frequent? I know it has been a hard year for many businesses — although not for Amazon, eBay, Netflix and, needless to say, Big Pharma. The fortunes of smaller businesses, like my favorite stationery shop and the Made in Britain sock manufacturer, are more of a mystery. I hope they are doing well, but I’m not going to give them our money today. For one thing, I already have enough stationery and socks, and for another, I resent the carefully planned psychological/data-harvesting campaign to get me to buy more.

I also resent the People’s Republic of China for saddling us with both COVID-19 and the 57 million pounds of plastic masks and other PPE now clogging the oceans, so I went to great lengths this year not to buy products made in China if I could find the same thing made somewhere else. (I may have dropped the ball for a couple of Christmas presents, but let’s not let the best become the enemy of the good here.)

Finally, I resent that a day dedicated to spending money has been introduced to the annual calendar, even in countries where there is no Thanksgiving Day. For some reason, the British have given up laughing at chaotic scenes on telly of Americans trampling each other to get into department stores long enough to start having Black Friday sales of their own. (Spoiler alert: It’s mostly the same stuff, sold by the same labels, much of it made in China.) But I suppose that reason is money.

Personally, I think money is too valuable to be wasted on shopping, especially when I have a mortgage and a husband whose job was a COVID lockdown casualty. Thus, I have become a minimalist, which is a person who hates shopping almost as much as she hates dusting.

I watch minimalism videos on Youtube with great interest, and most of them are compatible with the Christian way of life. They privilege meaningful experiences with others over possessions, and they encourage spending time with family instead of on stuff.

One of the stars of the minimalist movement, Joshua Becker, first heard of the minimalist philosophy while cleaning out his garage. He would rather have been playing with his son, but “the more stuff you own, the more your stuff owns you,” he told his neighbor.

The lady then said the words that made Joshua Becker a minimalist household name:

“Yeah,” she said, “that’s why my daughter is a minimalist. She keeps telling me I don’t need to own all this stuff.”

I don’t need to own all this stuff.

The sentence reverberated in my mind as I turned to look at the fruits of my morning labor: a large pile of dirty, dusty possessions stacked in my driveway. Suddenly, out of the corner of my eye, I noticed my son, alone in the backyard, still playing by himself. The juxtaposition of the two scenes dug deep into my heart, and I began to recognize the source of my discontent for the first time.

It was piled up in my driveway.

Josh doesn’t say if he got any of that stuff in a Black Friday sale, but I wouldn’t be surprised if he did. There’s something in human beings that just loves a bargain. My grandmother loved bargains so much, one of her cupboards was packed with sheets and towels she had no use for. And that was in the days before our computers told us what to do and where to buy.

This has definitely been a year in which we have been thoroughly bossed around by our computers. Twitter shadow-banning, Facebook censorship, endless COVID-19 propaganda, and the siren call of Amazon, an almost-irresistible force that sucked hundreds of billions of our dollars into Jeff Bezos’ pockets. Now my computer is inviting me to join the giant money squander known as Black Friday, and I’m saying no.

Not wanting to be another bossy computer voice, I won’t tell you what to do, but I’ll invite you to say no to Black Friday, too.