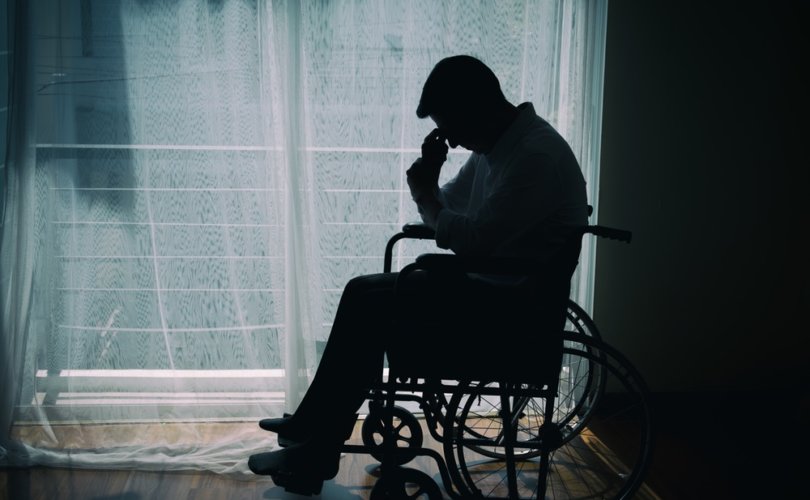 (LifeSiteNews) — With all the horror stories coming out of the Canadian euthanasia regime we’ve covered on LSN, I thought it would be good to draw your attention to a good news story posted recently by Alex Schadenberg of the Euthanasia Prevention Coalition (whom I interviewed at length recently on the podcast). Alex recently posted this email from an EPC supporter to his blog:

We have a wheelchair and medical equipment supply company in BC and recently encountered a young man in his late twenties with a rare condition who was counselled to accept MAiD, and had consented to do so. The “breaking point” for him, beside living with the consequences of his condition, was poor access to his residence leaving him a “prisoner in his own home.”

Meanwhile we became aware at the same time that a woman who had recently installed a special wheelchair lifting device in her home for the benefit of her ailing husband, who was suddenly bereaved when he passed away from his disease.

One of our sales staff, knowing the plight of the young man, gently asked the woman “if she would consider donating the lifting unit for someone else in need.” There would be a significant cost (about $5000), to dismantle the elevation unit at her residence and then move it to the new site and re-install it. Upon learning this, she not only donated the unit, but also agreed to pay the cost of removal and re-installation for the young man who desperately needed this device for access to his home.

Here is the ultimate effect of her generosity: the young man decided NOT to proceed with MAiD.

There is an important lesson here. As an increasing number of desperate Canadians opt for lethal injections because they cannot obtain the assistance and the resources they need to live day to day, we should seek opportunities to help where we can. Les Landry of Medicine Hat, Alberta, for example, has started both a GoFundMe to fundraise for his immediate needs—and has begun considering MAiD if he cannot procure the help that he needs.

Indeed, if a growing number of people are asking for assistance in committing suicide not because they are irrevocably determined to die but because suicide feels like the only option available to them, then perhaps some of them (many of them?) might be willing to reconsider if assistance is made available. It is now crystal clear that the government is either unwilling or incapable of providing the palliative care, the disability assistance, the psychiatric care, and the housing that is so desperately needed by so many people, especially as the cost of daily living skyrockets across the country.

— Article continues below Petition —
The Quebec College of Physicians must not be allowed to murder infants
Show Petition Text
4934 have signed the petition.
Let's get to 5000!
Thank you for signing this petition!
Add your signature:
Show Petition Text

In several recent instances, we have discovered that Canadians who were euthanized actually desired alternatives that were inaccessible to them—including the woman featured in the Simons advertisement that has been rendered even more grotesque with the revelation that she both sought and failed to find help for her condition. To cite just two recent examples:

A mother named Gwen, who suffers from chronic pain and disability from an accident, is considering assisted suicide because she has been denied coverage for treatments that could reduce her pain and allow her to care for her three-year-old daughter. “I didn’t have any idea how bad this condition would get when I had my daughter…and I feel like I’m failing her,” she told The Tyee. “I’m just so desperate to be with her…It’s eugenics, because they don’t want us to be properly supported and be OK. And if we don’t have family to take care of us, it’s ‘Please just go and die.’”

Forty-four-year-old Sathya Dhara Kovac, a Winnipeg woman suffering from a degenerative disease, died by MAiD recently after her persistent attempts to procure home care were denied. In an obituary published after her death, she revealed: “Ultimately it was not a genetic disease that took me out, it was a system. There is desperate need for change. That is the sickness that causes so much suffering. Vulnerable people need help to survive. I could have had more time if I had more help.”

That last, heartbreaking line should stand out to all of us: I could have had more time if I had more help. It is too late for Sathya Dhara Kovac, but surely there are many others just like her. Her words—and the stories of so many others—are a call to creative action on the part of those of us who see suicide for the ugly tragedy that it is. As the story related by Schadenberg indicates, lives can be saved as a result.