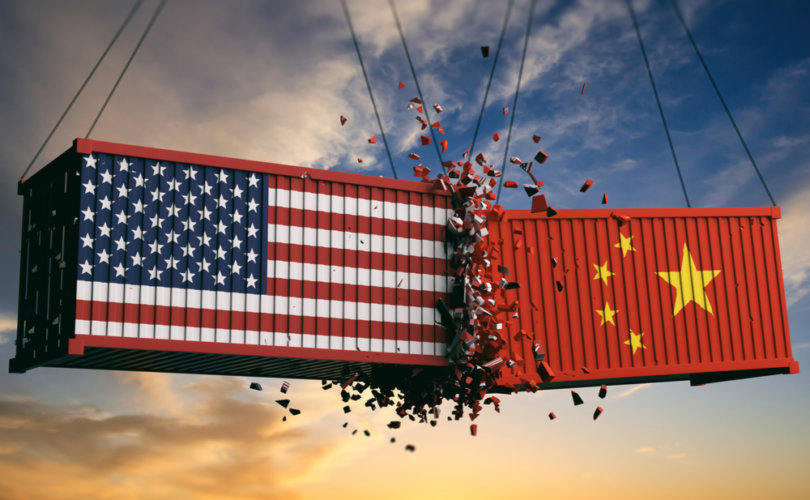 January 25, 2021 (LifeSiteNews) — One of the signal successes of the Trump administration, among many, was President Trump’s clear-eyed focus on winning the cold war with China. From the National Defense Strategy early in the administration, to the declaration that China is committing genocide against the Uighurs in its last days, Trump’s China policy was right on target.

The contrast with the feckless policies of the Obama-Biden administration could not be sharper. Vice President Biden, whom Obama had put in charge of China policy, was more interested in monetizing his relationship with Chinese oligarchs than in confronting the premier national security threat of the 21st century.

When Trump entered the White House in 2017, the pundits were predicting that the Chinese economy would be larger than America’s by 2020. Instead President Trump, ably assisted by Mike Pompeo, Peter Navarro, and a host of others, set back China’s plans by a decade.

But these gains could all be lost if we drop the tariffs, stop sanctioning China’s military hi-tech companies, distance ourselves from Taiwan, and abandon the other Trump policies that have helped American industry and workers while setting China back on its heels.

So what are the odds that the Biden administration will revert to the failed policies of the past? About even, I would say.

Here are some of the push-pull factors involved.

Mitigating against any softening of our current stance towards China is the Biden Crime Family’s past operations in China. Most of the country knows by now that Biden monetized his position as vice president by using family members as bagmen, taking Hunter along on his trip to Beijing, for example. Now that the “Big Guy” is president, the level of public scrutiny on his family’s dealings both at home and abroad will be intense.

Any sudden reversal of Trump’s policies will be seen as kowtowing to Beijing, not a good look for someone whose nicknames include “China Joe” and “Beijing Biden.” I suspect that Biden will probably avoid mentioning China at all, since his past business deals with the Communist leadership there constitute a significant political liability for him.

It’s unclear what role, if any, Hunter will play in a Biden administration. In a sane world, he wouldn’t even be allowed in the White House, given that he remains a partner in a Chinese investment firm, holding a share worth an estimated $50 million. So it is disturbing to learn that Hunter is already advising his father on U.S.-China policy, suggesting that China’s investment is already paying off.

However, Biden’s senior cabinet officials seem disposed to continue many of Trump’s policies.

To judge from his testimony at his confirmation hearing before the U.S. Senate, Secretary of State designee Antony Blinken is unlikely to repeat Hillary Clinton’s “Russian reset” stunt on his first trip to Beijing. He agrees with Pompeo’s genocide declaration about the Uighurs, saying, “Forcing men, women, and children into concentration camps, trying to in effect reeducate them to be adherents to the Chinese Communist Party — all of that speaks to an effort to commit genocide.”

It certainly is, as I have previously written in these pages.

Secretary of Defense designee Lloyd Austin likewise believes that Trump’s National Defense Strategy is “absolutely on track for today’s challenges” and concurred that China is the preeminent threat to the U.S. Russia is a power “in decline,” noted Austin, while China presents the most significant threat going forward.

But while cabinet secretaries seem disposed, at least rhetorically, to continue Trump’s tough policies toward China, there are some worrisome appointments lower down in the bureaucratic food chain.

China has made a decades-long effort to compromise Americans who work in the foreign policy field, especially those who specialize in China.

Biden’s pick for a top Pentagon post, Colin Kahl, works at a research center partnered with China's Beijing University, a school that has long been eyed as a security risk by western intelligence.

Kurt Campbell, who will join the National Security Council staff, has endorsed Trump’s tough approach to China. At the same time, he openly rejects the Trump administration’s position that we are in a cold war with China — even though Chinese leaders themselves have said so. Instead, he proposes that we adopt a policy of cooperating in “climate change, nonproliferation, and the management of the global economy.”

Given that we are dealing with the country that is, at one and same time, the worst polluter, proliferator, and predatory economic power on the planet, this view strikes me as naïve.

But even if Biden carries forward Trump’s tough-minded policies towards China, he is highly unlikely to take two further steps that are absolutely necessary to preserve America’s global preeminence.

The first is to aggressively move towards completely decoupling the U.S. and Chinese economies. Communist China has fastened itself like a giant leech on America, and is busily sucking out the best R&D in every hi-tech field from our universities, research institutions, and major corporations.

Given the massive scope of Chinese spying, the only way to stop this is to decouple our economy from China’s.

We must bring our economic interests and our national security interests back into alignment. We should preferentially trade with free market democracies that share our values and institutions, not with a one-party Communist dictatorship that is irredeemably hostile to our way of life and is determined to replace us as the dominant power on the planet.

To paraphrase Lenin, why should we allow the CCP to steal the rope that they will use to hang us?

The second thing we should do is to formally declare that the Chinese Communist Party is a Transnational Criminal Organization. This designation would constitute a recognition that the CCP is a criminal enterprise that corrupts everything it touches — from Wall Street to Big Tech, to the media and even to our institutions of government.

Legislation to accomplish this has been introduced into past sessions of Congress. It would add the CCP to the Top International Criminal Organization Target (TICOT) list. This is a list of international criminal organizations that pose the gravest threat to U.S. national interests.

The Chinese Communist Party belongs at the very top.