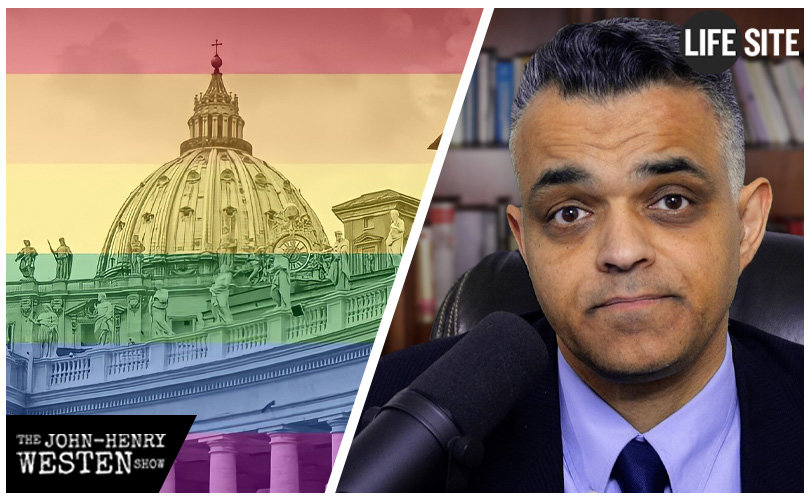 (LifeSiteNews) — Breaking news from Rome as Pope Francis has written praises of the heretical homosexuality-promoting New Ways Ministry, a group which was condemned by the Vatican under Pope St. John Paul II.

On December 8, the National Catholic Reporter (NCR) revealed that Pope Francis wrote two letters to the group’s executive director, Francis DeBernardo, on May 3 and June 17. The publication stated that the letters were on official “Vatican stationary,” and written in Spanish.

The second letter from the Pope to DeBernardo — a long-time advocate of homosexuality, and a 29-year veteran with New Ways Ministry — again praised him while also honoring New Ways Ministry co-founder Sr. Jeannine Gramick.

“Thank you for your neighborly work … [your] heart, open to your neighbor,” wrote the Pope, before praising Gramick, who has a long history of dissenting from Catholic teaching on homosexuality and abortion.

“I know how much she has suffered,” said Pope Francis. “She is a valiant woman who makes her decisions in prayer.”

LifeSite reporter Michael Haynes notes that the history of NWM and its two founders, Sr. Jeannine Gramick and Fr. Robert Nugent, involves persistent censure from ecclesiastical authorities. In 1984, Cardinal James Hickey, then archbishop of Washington, prohibited the group from further activities in the archdiocese.

After years of examinations and communication with both Gramick and Nugent, the Vatican under Pope St. John Paul II, specifically the Congregation for the Doctrine of the Faith (CDF), issued a firm note in 1999, signed by CDF Prefect Cardinal Ratzinger who would later become Pope Benedict XVI, condemning the group and its founders:

The positions advanced by Sister Jeannine Gramick and Father Robert Nugent regarding the intrinsic evil of homosexual acts and the objective disorder of the homosexual inclination are doctrinally unacceptable because they do not faithfully convey the clear and constant teaching of the Catholic Church in this area … The ambiguities and errors of the approach of Father Nugent and Sister Gramick have caused confusion among the Catholic people and have harmed the community of the Church. For these reasons, Sister Jeannine Gramick, SSND, and Father Robert Nugent, SDS, are permanently prohibited from any pastoral work involving homosexual persons and are ineligible, for an undetermined period, for any office in their respective religious institutes.

In 2010, Cardinal Francis George of Chicago re-iterated the CDF’s condemnation of the group, writing that “like other groups that claim to be Catholic but deny central aspects of Church teaching, New Ways Ministry has no approval or recognition from the Catholic Church and that they cannot speak on behalf of the Catholic faithful in the United States.”

This is not the first time that Pope Francis has contravened the constant teaching of the Catholic Church on homosexuality. However, the prominence of this case, which is in direct contradiction to the Vatican under Pope St. John Paul II and Pope Benedict XVI, will hopefully cause the faithful bishops in the world to take notice and defend the faith and the faithful who are being led astray.

We all recall that Pope Francis has on several occasions backed homosexual civil unions, and I showed some clips that have caused grave scandal among the faithful on this issue which I summarized last year.

The first letter from the Pope to the group, dated May 3, was in response to an April 21 letter DeBernardo had written to the Pope, explaining the nature of the pro-homosexual New Ways Ministry (NWM). The organization claims it “educates and advocates for justice and equality for lesbian, gay, bisexual, transgender, and queer (LGBTQ) Catholics, and reconciliation within the larger church and civil communities.”

Pope Francis wrote of a discernible “attitude of shepherd closeness” in NWM. “Sometimes we receive partial information about people and organizations, and this doesn’t help. Your letter, as it narrates with objectivity its history, gives me light to better understand certain situations.”

What is really deplorable here is the attempt to obfuscate, to pretend that New Ways Ministry is only trying to do what faithful Catholic groups who minister to Catholics suffering from same-sex attraction do — help them to fight against their sinful inclinations. New Ways Ministry actively promotes homosexual marriage. We know that first had.

For a perspective on this from Catholics who are themselves struggling with same-sex attraction I want to play for you a clip from an interview that I did with LifeSite reporter Doug Mainwaring who lived a homosexual lifestyle for a decade. He converted from it and returned to faithfulness to Christ and His Church. He described for me his reaction to Pope Francis affirming Carlos Cruz in his homosexuality.

Look, this has nothing to do with hating people who are same sex attracted. In fact, it has everything to do with loving them enough to tell them the truth, that the homosexual lifestyle is harmful to their bodies, minds and souls. Ultimately it is about souls.

Remember what Our Lord said about catering to the body and earthly desires recorded in Matthew 8:38. “What good does it profit a man to gain the whole world but lose his soul?” He called us to deny ourselves, take up our crosses and follow him. That is the only way to eternal life. Yes it is hard to deny our sinful urges but it is also the only way to true happiness on earth and in heaven.