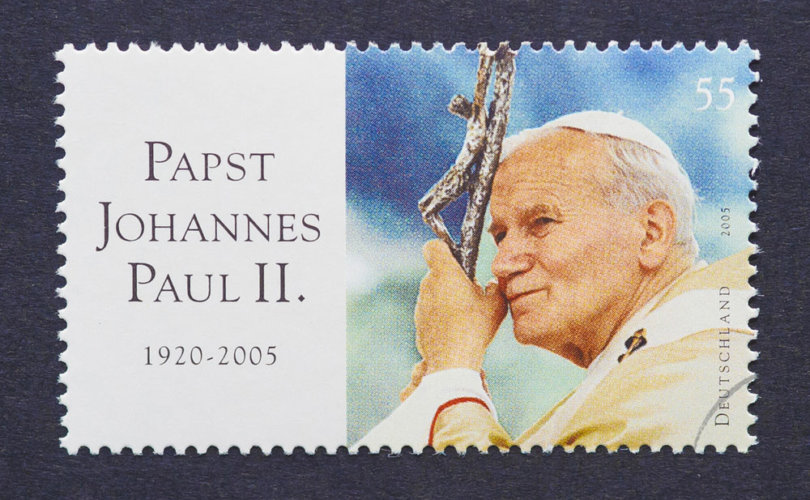 Cardinal Sarah is dismayed that St. John Paul II's encyclical on "The Family in the Modern World", an outcome of three synods, is being ignored during current discussions as though it was never published.Shutter stock

Aug. 26, 2016 (LifeSiteNews) – As San Diego’s progressive Bishop Robert McElroy and similar others are planning conferences on marriage and the family reflecting the outlook of Pope Francis’ controversial Amoris Laetitia, I am struck by more quotes in Cardinal Sarah’s book, God or Nothing. Readers may recall the previous four articles I wrote on themes in Sarah’s book. Well, here is number 5.

This one relates Sarah’s indication that the past few years of forced new debate over what the Church should do about divorce and re-marriage could be seen as “disrespectful”, “giving the impression of disputing the teaching of Jesus and the Church.” He also notes the ongoing, disturbing lack of references to the definitive teachings of St. John Paul II on these issues.

Near the end of God or Nothing, Cardinal Sarah is asked by interviewer Nicholas Diat to explain the vision of African ethnic groups on “marriage and of the indissolubility of the marriage bond.”

On page 249, after confirming “monogamy and indissolubility are traditional, firmly anchored in the African practice of marriage”, Cardinal Sarah continued,

“I would like to conclude this mention of the African tradition by paying my respects to John Paul II, who in Familiaris consortio definitively sealed the teaching and discipline of the Church that are founded on Sacred Scripture. Today, I think that we should stop discussing this question like disrespectful intellectuals, giving the impression of disputing the teaching of Jesus and the Church.”

The prominent Vatican cardinal was clearly unhappy about much of the discussion that took place during the two synods on the family, and, we might presume, also by parts of the exhortation under Pope Francis’ name on those discussions. Most of the issues concerned had previously been thoroughly explored and explained “definitively”, that is, according to the clear teachings of Jesus Christ, for all time, by John Paul II.

Moreover, it was not as though John Paul II wrote his 1981 encyclical on “The Role of the Family in the Modern World” (Familiaris consortio) without input from the world’s bishops. It was the result of three synods. Therefore there are legitimate questions about why the two recent synods on the same subjects were at all necessary.

After Sarah’s response above, Diat stated, “We seem to forget sometimes that a synod of bishops gave rise to the apostolic exhortation Familiaris consortio.”

“You are absolutely right! Many questions relating to the very beautiful reality of the family that God created were discussed in it. Among other topics, it spoke about divorced Catholics. In Familiaris consortio John Paul II wrote: “Together with the Synod, I earnestly call upon pastors and the whole community of the faithful to help the divorced, and with solicitous care to make sure that they do not consider themselves as separated from the Church, for as baptized persons they can, and indeed must, share in her life.”

From the comments of all the progressives at the last two synods one would have thought that the Church was cruelly insensitive, unmerciful and rejected the divorced from participation in the Church.

“They should be encouraged to listen to the word of God, to attend the Sacrifice of the Mass, to persevere in prayer, to contribute to works of charity and to community efforts in favor of justice, to bring up their children in the Christian faith, to cultivate the spirit and practice of penance and thus implore, day by day, God's grace. Let the Church pray for them, encourage them, and show herself a merciful mother, and thus sustain them in faith and hope.”

An attitude of mercy towards these suffering Catholics did not begin only in the reign of Pope Francis.

The Familiaris Consortio excerpt then added what we see must be the reason why the encyclical is being avoided. That is, mercy is indeed expressed in John Paul’s encyclical, but with mercy must also come the whole truth, a call to repentance and a defense of Christ’s full teaching without which there cannot be real mercy.

The very liberal progressives are repelled by John Paul’s words that naturally followed the above emphasis that the Church must “show herself a merciful mother”:

“However, the Church reaffirms her practice, which is based upon Sacred Scripture, of not admitting to Eucharistic Communion divorced persons who have remarried. They are unable to be admitted thereto from the fact that their state and condition of life objectively contradict that union of love between Christ and the Church which is signified and effected by the Eucharist. Besides this, there is another special pastoral reason: if these people were admitted to the Eucharist, the faithful would be led into error and confusion regarding the Church's teaching about the indissolubility of marriage…. Similarly, the respect due to the sacrament of Matrimony, to the couples themselves and their families, and also to the community of the faithful, forbids any pastor, for whatever reason or pretext even of a pastoral nature, to perform ceremonies of any kind for divorced people who remarry. Such ceremonies would give the impression of the celebration of a new sacramentally valid marriage, and would thus lead people into error concerning the indissolubility of a validly contracted marriage. By acting in this way, the Church professes her own fidelity to Christ and to His truth. At the same time, she shows motherly concern for these children of hers, especially those who, through no fault of their own, have been abandoned by their legitimate partner. With firm confidence she believes that those who have rejected the Lord's command and are still living in this state will be able to obtain from God the grace of conversion and salvation, provided that they have persevered in prayer, penance, and charity” (FC 84).”

St. John Paul II was above all clearly concerned for the spiritual health and life of every person. His outlook was an eternal one, an outlook that could not omit what are often called “the hard sayings of Jesus Christ” which caused many to leave him.

They did not understand that the “hard sayings” were what a loving father must also teach his children for their own good. They are actually painful for the father to give because he knows the suffering that can accompany them, but he also knows that he has given them all that they need to overcome the difficult situations and that the long-term goal – eternal life – is the only thing that really matters.

So, we will all have to be on the watch for what happens at these local synods and other conferences using Amoris Laetitia. They must not be allowed to spread a cancer of ambiguous, watered down or even false teaching that would result in many bad life choices, more personal suffering and spiritual damage, than if the true Catholic teachings were given with authentic mercy.

See related article, “Is Vatican, under Pope Francis, moving away from teachings of John Paul II on life and marriage?”

Another plea to Pope to correct ‘heretical’ statements in ‘Amoris Laetitia’

Bishop: Amoris Laetitia’s ‘intentional ambiguity’ means people will do ‘whatever they want’

Cardinal Schönborn: All prior teaching on family must be read through Amoris Laetitia