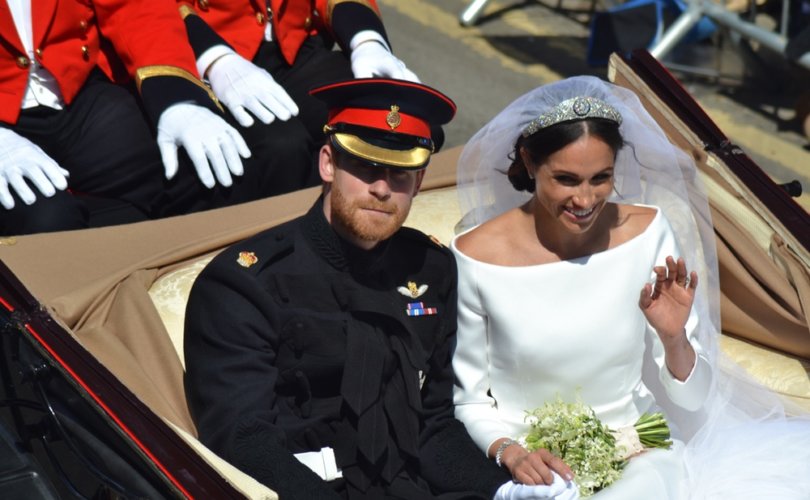 May 31, 2018 (LifeSiteNews) – Queen Elizabeth II, known to some as “the last Christian monarch,” is a profoundly apolitical person—she and her family do not even vote. She has remained for many a steadfast symbol of a Great Britain that has slowly faded away, with her first and favorite prime minister being the great Winston Churchill. Her brood, of course, has been largely unimpressive, although years of failing marriages have been kind to the tabloids. William and Kate have thus far avoided being anything other than mute and elegant representatives of the Crown—William’s ignorant comments on “overpopulation” notwithstanding—and with the marriage of Prince Harry to the American TV actress Meagan Markle, the Royals have experienced another wave of affection.

But the arrival of Meghan Markle—who, as is standard for American celebrities, has been vocally left-wing—may introduce an interesting new dynamic. The Queen doesn’t talk politics, but Markle certainly does—she has already utilized her bio on the Royal Family’s website to mention (somewhat sanctimoniously for a woman with an entourage dedicated to her happiness) that she is a “feminist.” She publicly opined on Brexit (opposed, of course) back when she had no stake in the matter. She has also already indicated that LGBT advocacy will be prominent and important to both herself and Harry in their public roles, with many British newspapers noting that the couple has promised to “campaign” for gay “rights.”

That fact explains the man Meagan and Prince Harry chose to deliver the sermon at their grand wedding. Rev. Michael Curry, an Episcopal bishop, is well-known for being a vocal advocate of gay marriage, which the Episcopalians have endorsed. The sermon was much-hailed by liberals around the world, mainly because it was an inoffensive and bland series of inspirational quotes with the word “love” consistently being breathed out in a manner that suggested someone trying way too hard. Much has been made of the hilarious reactions of the various Royals to Curry’s sermon—the Queen’s impassive scowl is by far the best—but many liberals attributed this to Curry’s edgy ability to shock rather than the fact that his performance was over-the-top and funny in a very un-self-aware sort of way.

In fact, I was surprised to see the following comment made on Facebook by one of my agnostic friends, a gay man who cut his teeth on LGBT activism: “Just getting around to watching the Royal Wedding. It’s lovely. But Bishop Michael Curry, the American Episcopal they brought in to whip it up, delivered such a vacuous form of Christianity it’s no wonder the mainline churches in North America are depopulating. His sermon, executed with the skill of Redd Foxx and with a self-consciousness one expects at amateur improv nights, could have been written by a heart-sick ninth-grader. What an empty, jargon-filled, self-satisfied load of mindless gibberish…This tirade, delivered to one of the biggest TV audiences in human history, was theological cotton candy. If this is the best Christianity has to offer, they’re in serious trouble.”

That is an extremely succinct description of Curry’s pablum from a man who would certainly consider himself a fellow-traveller on many social and ideological issues. Mainline Protestantism is, in fact, collapsing into the vacuum of its own utter emptiness—it was only this week that the Church of England put out a call for transgender people to join the clergy. These are the sorts of churches that allow those who have abandoned all Christian teaching to still enjoy the solemnity and beauty of some sacred music or ceremony or liturgy, without all the bother of actually having to stand for something. The fact that Prince Harry and Meagan Markle chose this particular preacher to deliver the sermon at their wedding is extremely indicative.

It will be interesting to see if Harry and his new bride manage to keep their progressive political opinions to themselves, or if they try to force the issues that they clearly see as important to the forefront of their public role. Harry, of course, doesn’t have the throne looming in his future, and it is hard to imagine that an American celebrity will simply accept the role of pleasant but docile Royal symbol. If she decides to model herself on Princess Diana, she may just decide that embarrassing the Royals comes with the territory. With Prince Phillip having receded from the scene and the Queen approaching her mid-nineties, it will be fascinating to see what the next generation of Royals decides to do with their role.