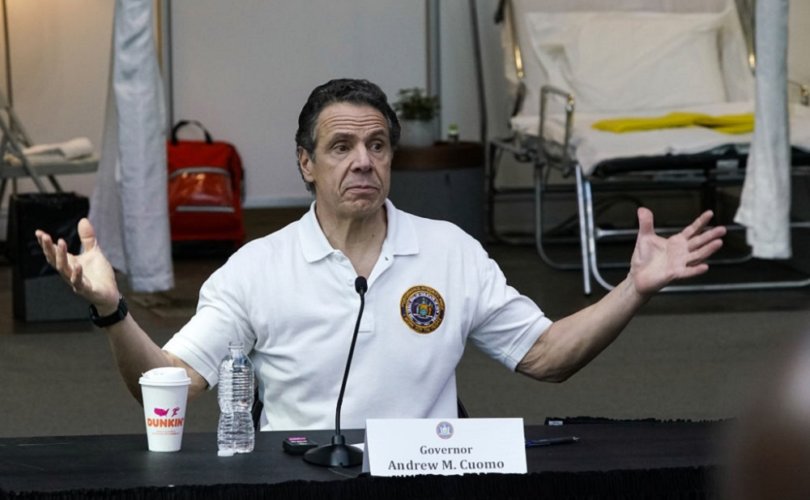 April 2, 2020 (LifeSiteNews) — One of the emerging storylines amid the coronavirus outbreak is the tumultuous on-again, off-again relationship between the pro-abortion Democratic governor of New York, Andrew Cuomo, and Republican president Donald J. Trump.

Over the past several weeks, Cuomo, 62, and Trump, 73, have praised the work the other has done to combat COVID-19. At the same time, the pair have taken to Twitter in recent days on multiple occasions to attack one another for not doing what the other feels is enough — or for doing the wrong thing.

On Friday last week, President Trump floated the possibility of implementing a federal quarantine for “hot spots” in New York, New Jersey, and Connecticut where cases are on the rise.

New York has been the state hardest hit by the coronavirus. Of the estimated 121,000 cases reported in the U.S., more than 52,000 are in New York alone, according to the Centers for Disease Control.

Cuomo, who said he was not consulted by the White House about the hypothetical lockdown, responded by calling Trump’s proposal “preposterous,” adding that it amounted to a “federal declaration of war” that would lead to “chaos and mayhem.”

Trump backed off the constitutionally questionable decree on Saturday after consulting with the White House Coronavirus Task Force and the governors of New York, New Jersey, and Connecticut. He has, however, decided to extend stay-at-home orders for all Americans until April 30.

Cuomo’s highly reported feuding with the president as well as his daily, televised updates on the coronavirus in New York are giving him a nationwide platform. His approval rating has seen a 27-point jump as a result.

Prominent voices in the media and Hollywood aren’t failing to notice his appeal and are beginning to wonder if the three-term governor might be in a better position to take on the president in the upcoming general election than the increasingly confused 77-year-old Joe Biden.

During an appearance on a podcast last week, Fox News host Tucker Carlson said he believes that the Democratic Party will replace Biden and likely will choose Governor Cuomo to take his spot on the ticket.

Joe Biden “will not be the Democratic nominee on Election Day,” Carlson told Charlie LeDuff, a Michigan-based journalist. “If I had to bet, I would think Andrew Cuomo would be the most likely to replace Biden.”

Carlson cited Biden’s declining mental health as the reason why Democrats would want to get someone else.

“He shouldn’t be working still. I’m not being mean. I know him. I’ve always liked him. But that’s true. And so those are two trains traveling toward each other at high speed, two competing imperatives. We’ve got to win, but we’ve got a guy who can’t win. Therefore, they’re gonna replace him.”

Carlson isn’t the only voice who thinks change is in the air. In a column for the New York Post, Michael Goodwin called on former president Barack Obama to get involved and to urge Biden to step down so the party could nominate Cuomo, Nancy Pelosi, or Hillary Clinton.

Most fair-minded commentators would agree that Biden, who fumbled his way through softball interviews on The View and MSNBC recently, had his worst week of campaigning last week. The hashtag #WhereIsJoe, a reference to the fact that Biden hardly appeared on the media at all, was a trending topic on Twitter.

President Trump ripped Biden for his absence during an appearance on Fox & Friends Monday morning.

“If Sleepy Joe was president he wouldn’t even know what’s going on, you know that. I mean, everybody knows that,” he said.

Addressing the rumors of a Cuomo-Trump matchup, the president, who, like Cuomo, has seen his own approval ratings jump as of late, remarked, “If he’s gonna run, that’s fine, I’ve known Andrew for a long time…I think he’d be a better candidate than Sleepy Joe.”

Only time, as well as Joe Biden’s cognitive well-being, will tell if Cuomo will be the Democratic Party’s choice to take on Trump. If he does end up being their candidate, it certainly wouldn’t be the first time a politician who has denied interest in running for president eventually wound up accepting the nomination. It would, however, be unprecedented in the way in which it was done.