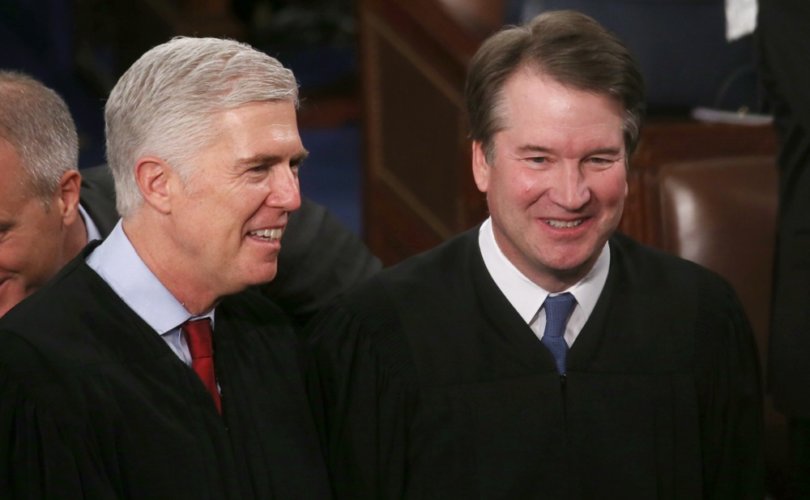 August 5, 2020 (LifeSiteNews) — It is a testimony to the fact that the left and the right play by a different set of rules that Senator Josh Hawley’s recent comments on Roe v. Wade, covered here by LifeSiteNews, are considered controversial. In a speech on July 30, the former Missouri attorney general stated that it is time for those who recognize Roe v. Wade as a stinking albatross around America’s neck to say so clearly — and to be guided by that fact in the selection of judicial nominees.

“I will vote only for those Supreme Court nominees who have explicitly acknowledged that Roe v. Wade was wrongly decided,” Hawley stated. “I do not want private assurances. I do not seek them. I do not want forecasts about future votes or future behavior, because frankly, I wouldn’t believe them. I don’t want promises of any sort. I want evidence that Supreme Court nominees will obey the Constitution and the law. I want to see in the record clear acknowledgment that a nominee understands Roe to be the travesty that it is. If that record is not there, then I will not support the nomination. I don’t care who does the nominating.”

Hawley sees abortion not as a political football, but as the great moral issue that it is, comparing Roe to the 1857 Dred Scott decision and the 1898 “separate but equal” Plessy v. Ferguson decision (both since overturned). He made no apologies for the comparison: “Yes, I do mean to compare Roe to those earlier cases because Dred Scott and Plessy and Roe belong together. They are the worst miscarriages of justice in our history.”

Hawley is right on every count. It is important to note that this is already how the left operates. As far as leftists are concerned, Roe v. Wade and the fictitious right to abortion are sacrosanct, and no Democrat would ever vote for a Supreme Court nominee so long as his position on Roe was in doubt. To get appointed to the bench by a Democrat, you must pledge your allegiance to Roe. That’s not controversial; that’s simply the way it works. Everybody knows it. The Democrats don’t try to hide it.

This isn’t about the politicization of the judicial process. It is about pro-life politicians applying a litmus test to nominees that includes ensuring support for the right to life of pre-born human beings, just as the Democrats insist that their nominees play along with the fiction that the child in the womb is not a child and thus can be killed for any reason. Pro-life politicians should be at least as committed to saving children as pro-abortion politicians are to ensuring that it remains legal to kill them.

It is also essential that we take Hawley’s approach because if GOP-appointed Supreme Court justices were the key to ending abortion in America, Roe would have been sent to the trash heap a long time ago. Roe v. Wade was decided by a 7-2 vote, and six of the seven justices in the majority were Republican appointees. When the Court revisited Roe in 1992’s Planned Parenthood v. Casey, abortion activists were paralyzed with fear, and pro-lifers were desperately hoping and praying that Roe would be overturned.

Instead, Roe was upheld — and every justice who voted to uphold America’s abortion regime (although modifying Roe’s holdings) was appointed by a Republican president, including justices appointed by Reagan and Bush.

We may be headed for a similar scenario. Unlike the Democrats, the Republicans do not actually vet their nominees on whether they would vote to overturn Roe v. Wade. In fact, they scrupulously avoid doing so, instead choosing nominees selected by The Federalist Society and assuming that justices holding to an originalist approach to the Constitution will most likely vote against Roe. (Justice Gorsuch and Justice Roberts managed to find transgender rights in the intent of the Founders, so originalism ain’t what it used to be.) In fact, Senator Susan Collins assured her detractors that her vote to confirm Brett Kavanaugh to the Court had been the result of a private conversation in which he assured her he had no interest in overturning Roe. We’ll see if that turns out to be the case. It isn’t promising.

We again have a Court ostensibly dominated by GOP-appointed justices. We have Chief Justice John Roberts, appointed by George W. Bush, who has longstanding connections to the pro-life movement (his wife has worked with Feminists for Life) but now seems to be a wild card. We have Trump appointees Neil Gorsuch and Brett Kavanaugh. And then we have the two dependable pro-life justices, Clarence Thomas and Samuel Alito (appointed by Bush I and Bush II, respectively.) If this were a numbers game, the pro-life movement should have it in the bag. But it isn’t. Over and over again, GOP-appointed justices have handed the win to the abortion industry and the consolation prize to pro-lifers (some modification of Roe that allows for state-level legislation.)

So Senator Hawley is absolutely right. Donald Trump got elected because pro-lifers want Roe overturned. If his appointees, like those of GOP presidents before him, end up disappointing the movement again, the transactional relationship between the Republican Party and the pro-life movement will need to change. What that looks like is simple: Supreme Court nominees swearing allegiance to vague legal doctrines isn’t good enough. Gutting Roe isn’t good enough. We’ll want to know if they’re willing to stand with Thomas and Alito and finally rid America of Roe. Nothing else will suffice.