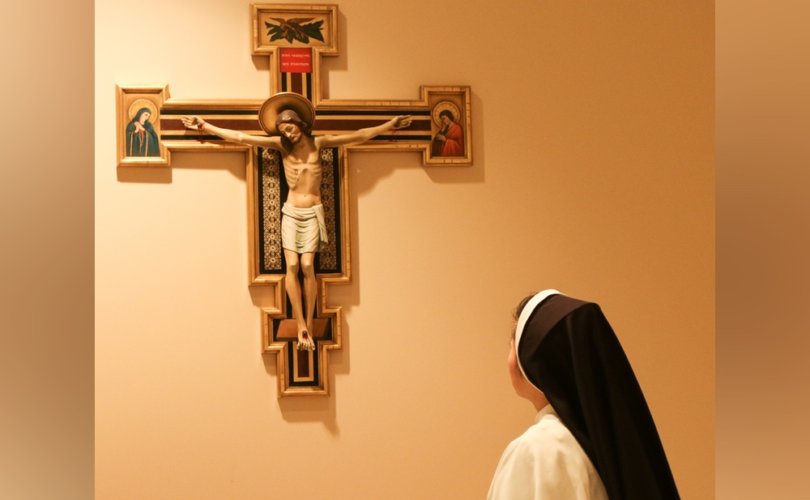 October 1, 2019 (LifeSiteNews) — In the opening week of October, the Roman Catholic liturgical calendar brings before our eyes a trio of religious, one Carmelite, one Franciscan, and one Carthusian — or rather, the most famous modern Carmelite, the founder of the Franciscans, and the founder of the Carthusians: St. Thérèse of Lisieux, St. Francis of Assisi, and St. Bruno of Cologne. Each one of these reminds us in a different way of the radical following of Christ in poverty, chastity, and obedience; in silence, solitude, and penance; in contemplation, liturgy, and fraternal charity. “Put nothing before the Work of God” — that is, the sacred liturgy, said St. Benedict of Nursia, who also said “prefer nothing to the love of Christ.” Where is this radical witness to the primacy and centrality of Christ still given?

The Lord has blessed me in my life with visits to many monasteries and convents, both in Europe and in the United States, where men and women are living the religious life to the full — chanted solemn liturgy, a demanding horarium, fasting and abstinence, much study and lectio divina, manual labor, the whole nine yards.

In many cases, these monks and nuns are living a life little different in essence from that of the desert fathers and mothers of ancient times — quite as if the modern world, with its ever multiplying complexities and ever deeper confusion, has nothing important to say to them. And they are right: it could only speak to them at lurid length of the world, the flesh, and the devil, when they are seeking heaven, grace, and God, for themselves and for others. They have no need to be up to date, rushing around with all the other people rushing around in a frantic desire to be noticed, to be relevant, to be on the cutting edge. In reality, it is the world that desperately needs these monks and nuns, their prayer, their peace. By being irrelevant and unnoticed in their daily round of prayer and penance, they possess a medicine that heals the victims of relentless change, frenetic activity, and self-negating indulgence.

These visits have done more than impress me. They changed my thinking about what is really important in life — and in the Church.

As I participated from the sidelines in the life of Christians for whom the Eucharist, the Bread of Angels come down from Heaven, is truly the font and apex of their entire being and the source of their joy, I began to feel how great a catastrophe was the death of traditional religious life in the period after the Second Vatican Council. In monasteries and religious houses, observances going back for centuries were suddenly thrown off; habits were modified or discarded; the daily round of prayer was severely cut back or even replaced with paltry novelties; the Holy Mass lost its contemplative spirit, degraded to arbitrary and subjective experiments. Places that had been epicenters of devotion for towns, provinces, and countries could no longer offer thirsty laymen the concentration of prayer and the purity of vision they longed for. Those who have seen the statistics know what happened: within a few years, the monastic life collapsed almost everywhere, as thousands gave up their vocations. Whole congregations and orders disappeared off the face of the earth.

Although a vastly larger number of the faithful were harmed by innovations and dissent at the parish and diocesan levels, the loss of the fullness of Christian life as it is lived in convents and monasteries, in total conformity to Christ the High Priest and Victim, was a devastating blow struck to the very heart of the Mystical Body of Christ on Earth. If prayer is the oxygen of the soul, as Padre Pio once said, the collapse of monastic life was a deoxygenation of the Church’s lifeblood. It has often been said that the external and missionary vitality of the Church is in direct proportion to the vitality of the hidden contemplative life within her, as the health of one’s complexion depends on the health of one’s heart.

It is only because the Church was once convinced of the truth of this unbreakable relationship between activity and contemplation, work and prayer, the exterior and the interior, that she declared a cloistered Carmelite, St. Thérèse of the Child Jesus and of the Holy Face, co-patron of the missions with St. Francis Xavier, who baptized hundreds of thousands of pagans. It is as if we are being told: there will be no Xaviers if there are no Little Flowers.

We are fortunate to be alive right now in the very earliest preliminary phase of recovery, as the number of authentic religious communities of men and women slowly grows by the mercy of God, in spite of dungeon, fire, and sword (or their ecclesiastical equivalents). May the Lord who loves the fruitfulness of the hidden life, the jewel of heavenly contemplation, the burning sun of interior righteousness, have mercy on us and save us, for He is gracious and loves mankind, and to Him we render glory, Father, Son, and Holy Spirit, now and always and for ever and ever, amen.