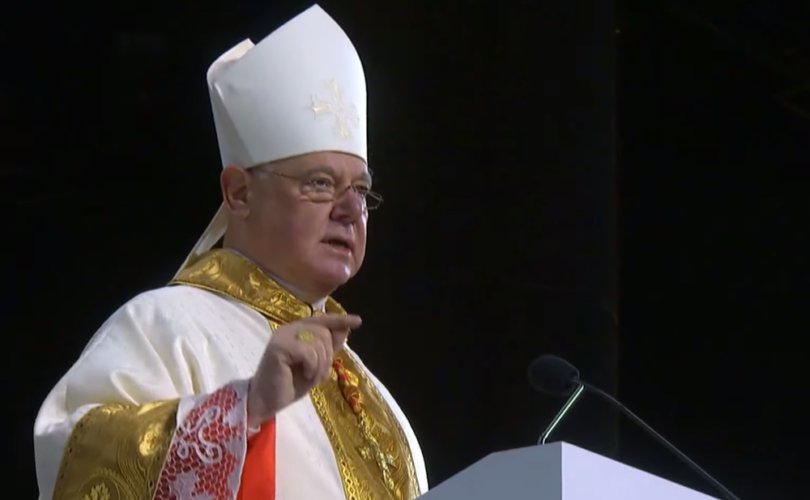 April 14, 2020 (LifeSiteNews) – Cardinal Gerhard Müller, the former Prefect of the Congregation for the Doctrine of the Faith, has in a recent interview argued against allowing Protestants to receive Holy Communion along with Catholics (intercommunion) and against female ordination.

The latter topic has once more been in the news after Pope Francis established yet another commission for the study of the female diaconate. On April 8, Pope Francis announced that after consultation with the new head of the CDF, Cardinal Luis Francisco Ladaria Ferrer, he had established a new commission to study the question of a female diaconate. No further details about the commission's mission were stated. Listed, however, were the names of the twelve new members of this commission.

With this decision, the Pope is following up on the October 2019 Amazon Synod in Rome which had asked, in its Final Document (no. 115), that the question of the female diaconate be further studied by the Church.

The female diaconate also has come up in the discussions of the German bishops' Synodal Path which aims at seeking ways of increasing the influence of women in the Church.

Independent of this new female deacon commission set up by Pope Francis, Cardinal Müller makes it clear in this new interview, conducted by Lothar D. Rilinger — a German Catholic lawyer and book author — that women may not have any access to the Sacrament of Holy Orders (read full interview below).

“Women cannot become priests,” he states, “because this is excluded by the nature of the Sacrament of Holy Orders. It is just not simply a ministry that one can aspire to.” It was Christ Himself who chose twelve men to be His Apostles, and even today, men have not a “right” to become priests, but have to receive a “call to the priesthood” from Jesus Christ.

This ban on female ordination, states Cardinal Müller, is “normative and as a truth contained in Revelation, not a habit subject to change.”

Concerning the matter of giving Holy Communion to non-Catholic Christians, the German prelate also makes it clear that such a reform is not acceptable.

“There are objective conditions for receiving Holy Communion,” Cardinal Müller says. “One must belong to the Catholic Church through Baptism and the profession of faith and must not have offended against the Commandments of God by the way one lives. It is essential for the communio with Christ and the Church that I affirm the doctrine of the Catholic Church. This is not normally the case with Protestant Christians.”

The interviewer, Lothar Rilinger, has just published a book about Rome and his reflections and impressions as a German Catholic when visiting the Eternal City. VRBS AETERNA III: Encounter with the German-speaking religious Culture in Rome is its title, and it is the third and last volume of this project, with a preface by Cardinal Müller.

It is obvious that the Church in the western world has been in crisis for some time. That is also why the call for reforms is getting louder and louder. While some people want to approach the reforms with the means of politics and thereby celebrate themselves as progressive, others want to lead the Church into a better future on the basis of Scripture and Tradition. Cardinal Müller bases his arguments on principles, and that gives his arguments a stringency that is not to be seen either in the Synodal Way or in the Amazon Synod.

Could it be that the arguments from the mainstream are helpful in order to tackle reforms, we ask the Cardinal.

“The mainstream is a construct that simply corresponds to conformity,” he replies.

“As with dictators, thought is controlled. Those who thought differently ended up in Siberia or Dachau. In this respect, mainstreaming is the expression of an intended dictatorship over opinions. This contradicts all the principles of our liberal democracy. Surely democracy means that every person is allowed to express his or her well-founded opinion and put it up for discussion, that he or she can also learn something from opposing views.”

It is also part of the mainstream to demand the admission of so-called Intercommunion. But the German cardinal opposes this idea.
“There are objective conditions for receiving Holy Communion,” Cardinal Müller makes it unmistakably clear.

“One must belong to the Catholic Church through Baptism and the profession of faith and must not have offended against the Commandments of God by the way one lives. It is essential for the communio with Christ and the Church that I affirm the doctrine of the Catholic Church. This is not normally the case with Protestant Christians. They are evangelical and reformatory and therefore differ from the Catholic Faith in their creed. Calvin and Luther taught that the Catholic celebration of Mass is an idol sacrifice, but this is no longer so brutally said today. Or the Reformers declared that the Pope is the Antichrist – they did not say that the Pope of that time was personally a bad Pope, they rather stated that the Pope as such, that is to say the papacy as such, was the Antichrist.”

“The reason given for this view was the argument that the Pope with his infallible teaching authority is said to have claimed – and continues to claim – by his definitive interpretation, to be in his dogmas above the Word of God. This is to apply equally to the Catholic Magisterium, the bishops and the councils. Furthermore, the Reformers denied that Confirmation, the Anointing of the Sick, Penance and Holy Matrimony were sacraments, i.e. means of grace instituted by Christ and effective in the Holy Ghost. If the sacraments are means of grace instituted by Christ, I cannot argue that they can be understood also a little differently. In this respect, I can only go to Holy Communion if I myself am in the state of grace and if am also in accordance with this community, the Catholic Church – with the full profession of faith and with my own way of life.”

The church is accused by the critics who believe in progress of getting entangled in clerical structures instead of opening itself to modernism and adopting democratic structures. Cardinal Müller states on this:

The Church is not a political event, and therefore the state models do not fit, they cannot be transferred to the Church,” clarifies Müller, “If the Church were a kind of state enterprise, where it is about a worldly rule, one could demand democracy, starting from popular sovereignty. But the Church is the People of God, and the sovereign in the Church is God Himself. The hierarchy, i.e. the bishops and the Pope, exists so that the teaching and pastoral ministry of the Church can be exercised in the name of God. In the episcopal and priestly ordination it is God Who enables us to proclaim His Word with authority and to exercise pastoral care as pastors, that is, to lead people to God. Neither the bishops nor the laity can say that they want to give themselves a new ecclesiastical constitution. The Church is not our property.

The call for democratic structures is accompanied by the call to accept women as equal partners in pastoral care and to admit them to the ordained ministries. But the prelate also opposes this reform project.

“The church leadership,” according to the former prefect of the Congregation for the Doctrine of the Faith, “is formed by the bishops. Women cannot become priests because this is excluded by the nature of the Sacrament of Holy Orders. It is just not simply a ministry that one can aspire to. Nor can a man simply say that he has a right to become a priest. One is called to the priesthood, and Jesus called to Him those He wanted. He appointed the twelve disciples as his Apostles. Throughout the history of the Church, this has always been understood as normative and as a truth contained in Revelation, not a habit subject to change.”

“The problem is that many who want to be priestesses understand the Church and the ministry in a political sense or in the context of social prestige. The priesthood is not, however, as many secular vocations were once, a kind of 'male domain' to be cracked under the sign of women's emancipation. Men and women who think this way are very angry with anyone who says that for theological reasons this request cannot be fulfilled. They accuse him of motivations that are absurd in themselves, and think that the bishop is one who has the power to decide on faith and morals according to his own discretion. And, as a woman, one would also like to have so much power and prestige as to demonstrate that one is equal to men in human dignity and as children of God, which would be an evil heresy to deny.”