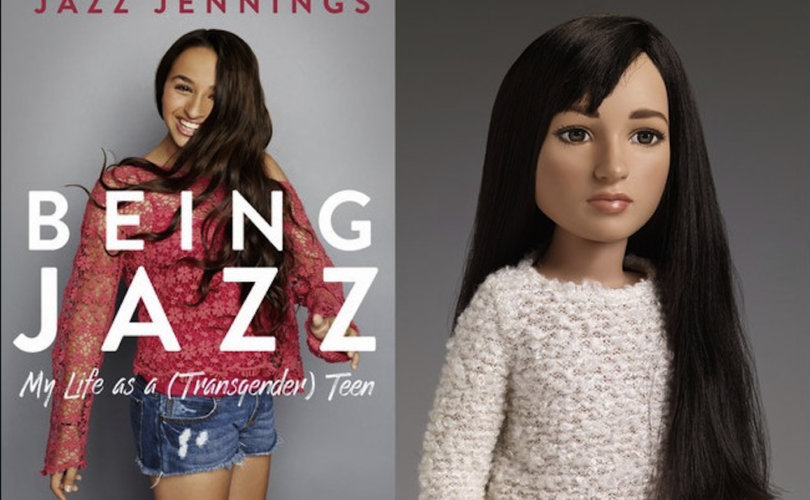 February 24, 2017 (LifeSiteNews) — We knew it was coming. Now it's almost here. The world's first “transgender doll” will go on sale this summer, based on the life of 16-year-old male-to-female “transgender” activist and cable TV star Jazz Jennings.

The doll is being produced by the New York-based Tonner Doll Company, whose founder and CEO Robert Tonner said in a celebratory press release, “Jazz stands for everything I respect from a human nature point of view — she’s incredibly brave, intelligent, warm-hearted and creative.” A prototype of the “transgender doll” debuted last week at the New York Toy Fair.

Jennings, the media-celebrated star of The Learning Channel (TLC) show “I Am Jazz,” started his “transition” to living as a “female” as a five-year-old boy, with his family’s enthusiastic (and troubling) support. He is taking hormone therapy to block his puberty and natural development into a man.

This is the first transgender doll on the market, and guess what?! It's ME!!!���� @tonnerdoll did a great job of creating this beautiful item! It will be available in July, and I hope that it can place transgender people in a positive light by showing that we are just like all other people�� For those asking: the doll is considered to be the first “transgender” doll because it's based on an individual who is trans. Of course it is still just a regular girl doll because that's exactly what I am: a regular girl!��

Responded “I.ee.O” on Instagram: “Since when is ignoring genetics and basic biology now something we should force on young children?”

First of all, if Jazz (born Jared) Jennings is a “regular girl,” then I’m a 6-foot-6 NBA basketball player. Thinking and claiming you are something doesn’t make it so, as this 2016 pro-family video of brainwashed college students cleverly illustrates.

But here’s the curious thing about the Jazz Jennings doll: as a biological male and “DNA Denier” who wants to be a girl, Jennings and his recklessly enabling parents are still “crafting” his body to match their collective, politically correct fantasy of his “gender identity.”

There's something beyond surreal about artisans crafting a doll body for a boy-to-“girl” doll based on the life of a gender-confused kid who is still reconstructing his own body to match the fictional female he wants to become.

As I understand it, Jennings is considering getting breast implants to make him “happier” and “more secure” in his fake-feminine body. He has a natural penis, but may get “male-to-female” bottom surgery when he turns 18. (Hopefully, he will never go through with it: many M-to-F transsexuals delay or never get the horrific operation, even as they continue to live as “women”; see https://www.sexchangeregret.com/)

In one bizarre episode of “I Am Jazz” last year, Jennings got an erection during an operation to get his “testosterone-blocker” switched out. I suppose in Trans-Speak, a “girl” with an erection is right up there with the much ballyhooed (fake) news of the “pregnant man.” Of course, the LGBTQ-cheerleading media report every gender-bending development so seriously.

I have only watched a portion of one episode of “I Am Jazz,” but recall Jennings being ambivalent about getting “bottom surgery.” Who can blame the boy for not wanting to castrate himself? In the too-gross-to-fully-describe MTF “sex reassignment surgery,” the male phallus is destroyed and the skin turned inside-out to create a makeshift “vagina.”

But what about the poor children who will be receiving these gender-confused dolls? They are like the toddlers who had “Heather Has Two Mommies” (now sold by Walmart!) read to them by liberal parents and teachers two decades ago when “gay” was the new, big liberal thing.

Today’s youngsters — like Jazz Jennings himself — are only the latest guinea pigs for liberal ideologues who are reclassifying their rejection of God’s wonderful design for males and females as a “civil right.”

And we, of course, as defenders of nature and nature’s God, are the “transphobic bigots.”

Take Action: Pray for Jazz Jennings, that he would return to accepting his God-given sex. And resist the DNA- and reality-denying “transgender” agenda, which is putting youth at risk.