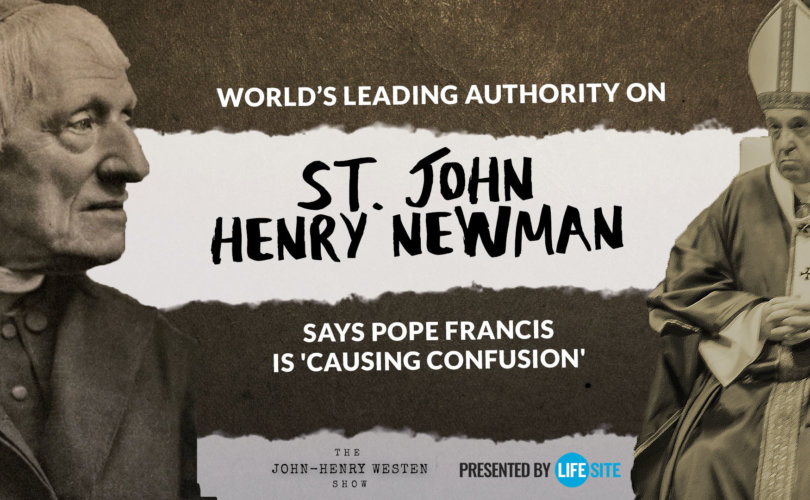 ROME, Italy, October 29, 2019 (LifeSiteNews) — Fr. Ian Ker is widely recognized as the leading authority in the world on the recently canonized St. John Henry Newman. In this episode 39 of The John-Henry Westen Show, LifeSite’s Jim Hale sat down with him to discuss Pope Francis and what he thinks St. Newman would have made of the Church today.

When asked if he thought Cardinal Newman would support women’s ordination and married priests, Fr. Ker flatly stated “nonsense!” Many liberals like to quote Newman for having said “to live is to change,” Fr. Ker said, but Newman also said that Christianity changes “in order to remain the same.”

Fr. Ker said that Pope Francis is “really a throwback to the 1970s Jesuits…in other words, a liberal.” Francis has “created great doctrinal confusion” and has said “crude, vulgar” things. “It’s terrible what’s happening.” He’s “very vindictive,” he added. But, as Newman once said, Fr. Ker noted, “The Church always survives these things.”

Hilariously, Fr. compared Pope Francis to U.S. President Donald Trump. They “both like sacking people,” he said, referring to Francis’ dismissal of Cardinal Muller from the Congregation of the Doctrine of the Faith. “The only different between him and Trump is Trump’s got a beautiful wife and he hasn’t.”

Fr. Ker said Pope Francis has made some “appalling appointment(s)” in his choice of Cardinals. He brought up how Archbishop Chaput of Philadelphia and Archbishop Gomez of Los Angeles have both been denied red hats and how liberal U.S. Cardinal Tobin of New Jersey was chosen.

Newman “anticipated the council” and “could’ve predicted the confusion that followed Vatian II,” Fr. argues. “That wouldn’t have surprised him in the least bit.” He “never lost his sense of humor even in the darkest hour.”