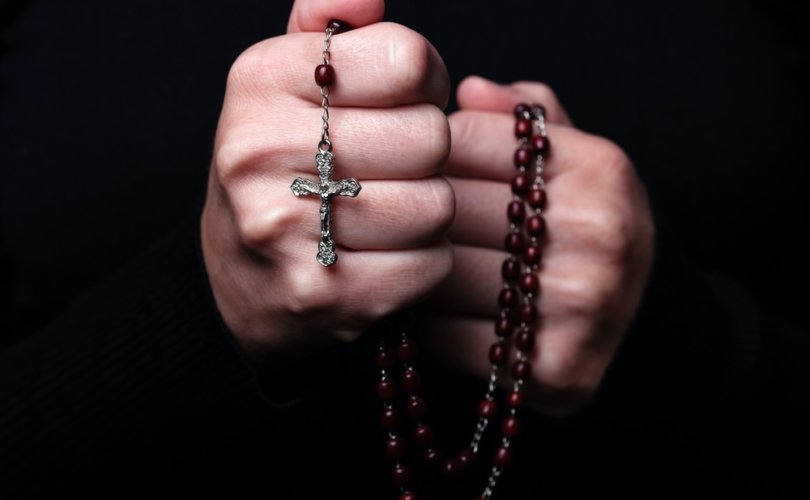 (LifeSiteNews) – Daniel Panneton, a sensationalist writer in The Atlantic, thinks he has just uncovered a vast “rad trad” Christian nationalist conspiracy centered on the Rosary. The hit piece, “How Extremist Gun Culture Is Trying to Co-Opt the Rosary,” tries to turn the august sacramental into an alt-right talisman.

By guilt of association, he claims the Rosary is entangled with an “absolutist gun culture” and “conspiratorial politics.” Any conservative activists praying the Rosary risk being accused of weaponizing it and thus are a danger to society.

Mr. Panneton could have saved himself much time and trouble if he had just researched the Rosary beyond the conspiratorial websites he trolled to put together his dramatic rant.

Catholics have never hidden the fact that the Rosary is a weapon in the fight against the forces of evil. For seven centuries, the Rosary has been a powerful weapon against the world, flesh and the devil. The present era is no exception to the rule. Indeed, it is needed now more than ever.

Saint Dominic first promoted the Rosary as a means of fighting against the Albigensian heresy in the thirteenth century. In 1571, Pope Pius V convoked all of Christendom to pray the Rosary to overcome the Muslim fleet at Lepanto. The date of the Catholic victory on October 7th was later declared the Feast of the Most Holy Rosary.

When the Blessed Mother appeared to three shepherd children in Fatima, Portugal, in 1917, she asked everyone to pray the Rosary daily to end the fighting in Europe. Many credit the retreat of the Soviet Army from Austria in 1955, after the Second World War, to the massive public rosary rallies organized all over the nation by Fr. Petrus Pavlicek.

Wherever there is a fight against Church enemies, the Rosary is at the heart of the struggle. The Church has never hidden the Rosary and the militant imagery associated with being Christian in a hostile world. There is nothing wrong with adapting that imagery to modern times and warfare. It was not without reason that Blessed Pope Pius IX said: “Give me an army saying the Rosary, and I will conquer the world.”

With a proven track record, the Rosary is a real and effective weapon against real enemies of the Church. It strikes terror in the hearts of those who persecute the Church, including those involved in the present culture war.

Thus, Mr. Panneton’s attacks on the Rosary can only be explained because he sees it as a threat to the present godless culture. He cannot fail to notice that the Rosary increasingly appears everywhere on the front lines of the culture war. Its incredible power has closed abortion clinics, canceled Drag Queen Story Hours and angered satanic activists. His attack targets not alt-rightists but faithful Catholics in the public square praying the Rosary in successful obedience to Mary’s Fatima request. And it terrifies him.

Mr. Panneton’s concern about the Rosary has three significant flaws.

He does not understand the nature of the Rosary as a prayer that unites the person to the Blessed Mother. Thus, he creates the blasphemous fiction that the rosary beads as a good luck charm are weaving themselves into an extremist fringe.

The Rosary, by its nature, links the Catholic faithful to Our Lady, who is all pure, all good and incapable of sin. Nothing about Our Lady can be against the common good. Those who say the Rosary will forever strive to do nothing contrary to God’s law. To suggest that devotees to the Rosary are potential alt-right terrorists is an insult to all who love and pray the Rosary.

His second problem is his desire to isolate the Rosary to render it harmless. While he accuses conservatives of weaponizing the Rosary, he wants to ghettoize it. He deems the Rosary acceptable as long as it stays inside the churches and out of the public square. The Rosary must be reduced to a security blanket to bolster weak souls afflicted with anxieties. It must be kept in the hands of those he deems “holy” and therefore ineffective. The mixture of Catholic activism and the Rosary cannot be allowed.

Finally, Mr. Panneton’s vision of the Rosary wants to limit its use to vague and ambiguous evils. Rosary devotees must keep their fights subjective and internal. Target a folkloric “Satan” that exists only in the imaginations of nervous Catholics and not the real world.

The minute the evil is identified with a satanic Black Mass at Harvard University or Oklahoma City Hall, the LGBTQ+ agenda or “reproductive rights,” the writer sounds the alarm. The Rosary then favors dangerous “homophobic” positions. It represents a “militarism [that]also glorifies a warrior mentality and notions of manliness and male strength.”

The wrongheaded Canadian writer shows his true extremist colors by defending all the leftist positions. When the other side says to stop using the Rosary, that is a sure sign that it is having an immense impact on the “principalities and powers” that dominate the modern world (Eph. 6:12). It is time to press the attack.

The Rosary is a most powerful weapon. Catholics need to use it proudly, publicly and fervently.