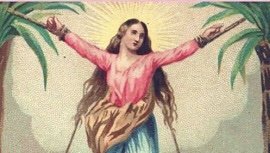 FELTRE, Italy, March 18, 2020  (LifeSiteNews) ― A little-known saint has been rescued from her earthly obscurity because of her striking name.

St.Corona, until now believed to be the patron saint of treasure hunters, has been promoted by spontaneous internet reports as the patroness of those fighting against plagues and pandemics. However, evidence for this claim is lacking.

The historical details of the life of St. Corona are few. According to the webpage of the Basilica of Saints Victor and Corona in Anzu, Italy, her martyrdom, which closely followed that of St. Victor, was recorded in a fourth century work by a deacon in the Church of Antioch. The two saints were martyred in 171 AD in Syria during the persecutions of Marcus Aurelius (b.121 – d.180).

The unknown author wrote that St. Corona, the young wife of one of St. Victor’s colleagues, was present when the soldier was put on trial for his Christianity and  tortured. Impressed by his courage, St. Corona declared aloud that she, too, was a Christian. She was arrested, interrogated and condemned to have her feet tied to the tops of two curved palm trees, which were then released, tearing her apart.

“St. Victor, instead, had his head cut off,” the account ends.

Another account of the martyrdom of Saints Corona and Victor appears in the Roman Martyrology. This account says the two were martyred during the reign of Antoninus (b.86- d.161). “Victor was subjected to various horrible torments under the judge Sebastian,” it reads.

“As Corona, the wife of a certain soldier, was proclaiming him happy for his fortitude in his suffering, she saw two crowns falling from heaven, one for Victor and the other for herself,” it continues.

“She related this to all present, and was torn to pieces between two trees; Victor was beheaded.”

The relics of Saints Victor and Corona now resting in the Basilica are believed to have traveled from Syria to Cyprus and then to Venice before arriving in Feltre “probably in the ninth century,” the Basilica account states.

Scientific research carried out in 1943 and 1981 confirmed that the relics are the bones of a man and a woman. The later investigation determined the presence of Cedrus pollen, suggesting that the relics are indeed from the Middle East, as the tradition states.

Less certain is that anyone prayed to St. Corona for the relief of disease before this current outbreak of a coronavirus. Historically, she has had a following in German-speaking countries, but unfortunately her name was given to a folk magic ritual popular in the 17th and 18th centuries to find treasure. St. Corona thus became a patron saint of treasure hunting. She has also been invoked as the patron saint of money because her name so closely resembles a German word for currency.

It would seem, therefore, the story that St. Corona is a noted patroness of plague and pandemic is too good to be true. A saint who is proven to have been invoked in times of pestilence is St. Edmund of East Anglia. Almost nothing is known about St. Edmund’s life and martyrdom, but his intercession was believed to have saved the French city of Toulouse from the plague that raged there between 1628 and 1631.

The feast of Saints Victor and Corona is traditionally celebrated on March 14.