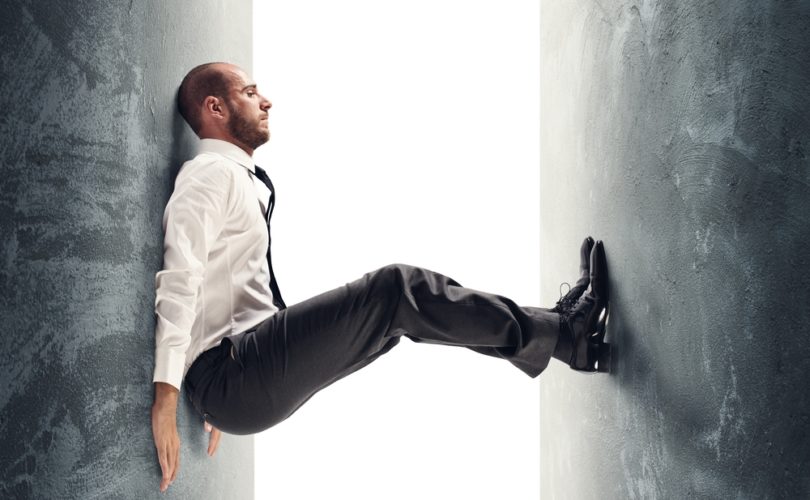 Every day it is becoming more difficult to be both a good Christian and a successful lawyer, doctor, or civil servant. And that's the whole point.

I always find it fascinating to travel in formerly Communist countries—the combination of decaying Soviet architecture and Western modernity, the resilience of the people, and above all, how in so many cases it was Christianity that helped the oppressed peoples hold onto their families, their cultural heritage, and hope. There are so many lessons Westerners should learn from how Communism took hold, and how its leaders tried to oppress, disenfranchise, and homogenize the peoples under their rule.

Indeed, there are striking similarities between how the totalitarian Communists of the Eastern Bloc and the cultural Marxists here in the West attempt to enforce their secular and anti-Christian ideology.

One similarity struck me in Budapest last week, when our tour guide stopped on the steps of the St. Stephan Cathedral to explain how the Hungarian Communists “dealt with” the Christians. It wasn’t that you couldn’t be a Christian, she said. You could pray at home, worship at home with your family, even get baptized and go to church. However, you had a choice. “You could either be a Christian,” she told us, “or you could be successful.” Case in point: Because her family was Christian and she was baptized, her sister was the first member of their family to be able to attend university, after the disintegration of the Soviet Union.

This tactic is very much being utilized by cultural Marxists (or “secularists” to use the more familiar term) here in the West as well. We still have freedom of religion in Canada—we can worship with our families, attend church, and hold whichever views we choose to hold. But what the cultural Marxists are attempting to do is to give people a choice in the West: You can be a Christian, or you can be successful.

One of the easiest ways to push Christians to the margins of society is to slowly but surely implement policies that force them out of traditionally elite professions, such as law and medicine. And that is precisely what the cultural enforcers of secularism have been doing—and they’re picking up speed. It’s not full-out war on Christianity, yet—rather, it is death by a thousand cuts.

For example, Ontario’s College of Physicians and Surgeons recently tabled a proposal that would force doctors to provide abortions and contraceptives in certain circumstances, and coerce them to refer for them in virtually all. According to LifeSiteNews:

The proposed policy would compel a physician who refuses a procedure for reasons of conscience to assist the patient in finding a doctor who would provide the procedure. If a referral is not possible, it says, the doctor “must provide care that is urgent or otherwise necessary to prevent imminent harm, suffering, and/or deterioration, even where that care conflicts with their religious or moral beliefs.” Released in December, the College’s governing council will vote on the policy in June.

In other words, if these proposals were passed, Christians would have to consider the fact that the medical establishment would attempt to force them into unethical behaviors, possibly including the destruction of human life. Thanks to this policy many Christians considering medical school could well decide to opt for a field that does not force them into ethical dilemmas. And the ultimate goal of keeping Christians out of the medical establishment is furthered.

In other words: “You can be a Christian, or you can be a successful doctor.”

The same goes for the legal profession in Canada, with the attack on Christians in the legal community being most publicly manifested in the actions taken against the proposed law school at Trinity Western University. Trinity Western University is, of course, a Christian university, and like many other Christian schools, asks that its students sign a covenant pledging obedience to the biblical view of morality, including on sexuality. Because of this traditional Christian view, the Law Society of British Columbia, the Nova Scotia Barrister’s Society, and the Law Society of Upper Canada declared that they would bar any graduates of Trinity Western’s proposed law school from practicing law—ironically, because they felt that Trinity Western was not appropriately “inclusive.”

Here, at least, Christians in Canada have scored one major victory, when Justice Campbell of the Nova Scotia Supreme Court unceremoniously overturned the Nova Scotia Barrister’s Society’s decision. According to LifeSiteNews, Campbell wrote:

In trying to shun TWU students…the law society exceeded its authority. Its mandate to regulate legal practice in Nova Scotia does not include the power to order universities or law schools to change their policies. There is no indication TWU students would be inadequately trained, yet the law society would ban them anyway,…If TWU did not exist, the same students holding the same beliefs would be free to obtain law degrees elsewhere.

Just so. But other organizations in Canada are working hard and fast to make sure that reasonable judges like Justice Campbell do not prevail. Organizations like one of Trinity Western’s most ardent foes, “Legal Leaders for Diversity” (LLD). Although many Christians have never heard of this organization, the policies that LLD seeks to implement in the legal sphere have dramatic consequences. As Ottawa lawyer Albertos Pozigolopolous recently wrote in Cardus:

The Legal Leaders for Diversity (LLD)… is made up of the heads of the legal departments from more than 70 major corporations. The campaign involves its own form of community covenant by these 70+ corporations (including BMO, Ford, The Globe and Mail and the Edmonton Oilers) to restrict hiring of law firms for their legal work to those who have a commitment to “diversity” and “inclusiveness.” The LLD’s definition of these words requires approval of same-sex marriage and excludes Christians or others who might have a different opinion.

The LLD publicly opposed TWU’s proposed law school on the basis that TWU’s Community Covenant is not “inclusive.”

This direct attack on Christian lawyers is meant to create a chilling effect in the legal profession. Lawyers who work for law firms seeking to do business with these corporations will hesitate, and perhaps even be barred from voicing their religious and moral beliefs, or for acting for religious clients in human rights cases dealing with these issues. It’s a scary time to be a Christian lawyer in Canada.

In other words? If Legal Leaders for Diversity have their way, you can be Christian, or you can be a successful lawyer.

Canada’s politics has also become increasingly hostile towards Christians. In Thomas Mulcair’s New Democrat Party, no one holding the Christian view of human life in regards to abortion can run for office. And most recently, Justin Trudeau’s Liberal Party has also put out the message that Christians Need Not Apply: Only those willing to vote in favor of the legal destruction of human life by abortion can run under the blood-red Liberal flag. For those seeking to represent their fellow citizens, the options for political office have become slim indeed. The message they intend to send? You can be Christian in Canada. But only if you check your Christian values at the door of the House of Commons can you be successful.

The cultural Marxists of the West do not need to use the jackboot of the Communists of the East. Their totalitarianism and anti-Christian ideology is implemented at a slower pace and in a quieter fashion, but the effect is just as dangerous. If we are not very careful, and listening very closely, the day will soon arrive in Canada, and all across the West, where you can be a Christian, or you can be successful.