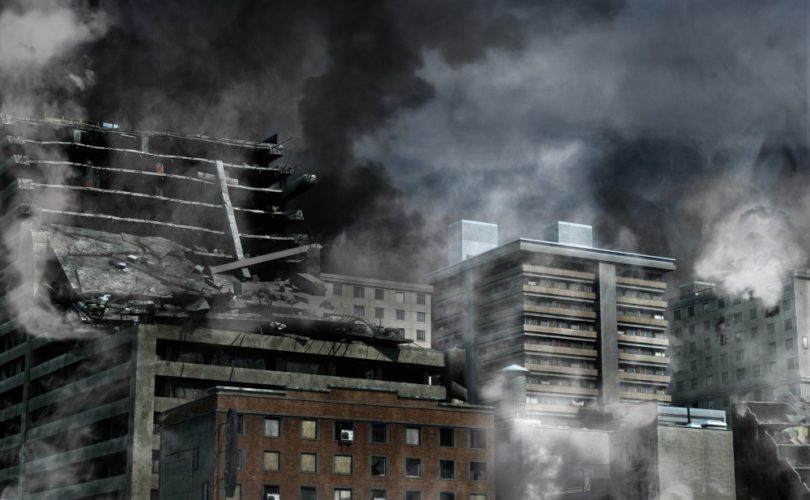 There is no help from 'the culture,' because there is no longer any culture; only the rubble of what used to be a culture.

It should be obvious to anyone who thinks about it for a moment that it is always far easier to destroy than to create.  One bomb or wrecking ball can shatter in an instant the cathedral that it took human hands and minds fifty years to build.

During the early and dark days of World War II, when the British army at Dunkirk had the sea behind them and the Germans before them, they sent a message back home consisting of three words: But if not.

It was a brilliant message, because even if the Germans managed to intercept it and decode it, it wouldn't have done them any good. “But if not”…what?

But the army knew that their countrymen would understand. It was more than a message regarding strategy.  It captured the heart of the war itself, a battle for the survival of European culture and civilization against the diseased fantasies of the Third Reich.

The reference comes from the story of the Hebrew youths Shadrach, Meshach, and Abednego, in captivity in ancient Babylon, who refused to bow down in worship before the statue of King Nebuchadnezzar.  The king summoned them before him in a fury and demanded their submission, lest he cast them into the fiery furnace.  Their reply was manly and direct:

If it be so, our God whom we serve is able to deliver us from the burning fiery furnace, and he will deliver us out of thine hand, O king. BUT IF NOT be it known unto thee, O king, that we will not serve thy gods, nor worship the golden image which thou hast set up.

The British people then roused themselves to action – ordinary men, anyone with a boat and a heart that beat warmly for God and country.  They crossed the channel in defiance of the enemy and rescued more than three hundred thousand men.

The incident reveals more than a common language.  It reveals a common way of life, and a common view of life.  The sterling words of the old King James Bible, a work of the highest culture, had long come to inform and vivify the ways of ordinary people.

That message could not now be sent, either to England or America. It would be incomprehensible.  That is not because the culture has changed.  It is because it has been destroyed, and the most energetic destroyers have been the very people whom we charge with its care: teachers, professors, statesmen, and artists.

Thomas Molnar had this to say about it:

Culture has come to mean . . . anything that happens to catch the fancy of a group: rock concerts, supposedly for the famished of the third world; the drug culture and other subcultures; sects and cults; sexual excess and aberration; blasphemy on stage and screen; frightening and obscene shapes; the plastic wrapping of Pont-Neuf or the California coast; to smashing of the family and other institutions; the display of the queer [that is, bizarre], abject, the sick.  These instant products, meant to provide instant gratification to a society itself unmoored from foundation and tradition, accordingly deny the work of mediation and maturation and favor the incoherent, the shapeless and the repulsive.

We want to raise up young people in a culture of life. Well and good. But that means that we require a culture, and that doesn't happen by itself, especially not now, when all the forces of “education” and mass entertainment are ranged against the very possibility of a culture.

Imagine a scene of wholesale destruction. Every old and venerable structure has been reduced to rubble. People relieve themselves in the street. Sometimes they copulate there, too. Their “music” is little more than grunting and groaning. Their rulers are on the take. There are hundreds of thousands of old books in the mountain of stone and mortar that used to be the library. Most of those books are far beyond the capacity of the people to read. They sneer and snort at Shakespeare, because they can't understand him. They've never even heard of Virgil. A lot of these people have taken to cannibalism.

Now then – you have retained some vague memory of a more noble way of life.  You have therefore arrived at a great truth. It's perfectly obscure to most of your fellow rubble-pickers, who mock you and call you a prude, a Neanderthal, a medieval monk, a madman, a hater of the hungry, and so forth. Your precious truth is simply this: it is wrong to eat human flesh.

Well, that is no great burst of enlightenment, but it is a beginning. So what do you do?  Will you be content to say, “My children will do everything that everyone else is doing, but they will not eat human flesh?” They will be subhuman and subcultural, but their taste in dining will be restricted just a little?  Is that all?

Will you say, “Our family is not anthropophagous, but we will send our children to be taught by the same fellow that all the other parents use,” the one with the squalid leer, dabbling in excrement, contemptuous of any wisdom from the past?

That is where pro-life parents find themselves now.

Should we expect any help from places like Yale? Those places sponsor weeks for show-and-tell by whores and peddlers of sex toys. Any help from your local school? That would be like expecting Belial to lead you in prayer. There is no help from “the culture,” because there is no longer any culture; only the rubble of what used to be a culture.

What do you do, then?  Turn back, O man.  It's time to recover and rebuild.

1
The simple reason why you should stop using Gmail
2
Pro-life Catholic father Mark Houck pleads not guilty to federal charges after FBI raided his home
3
FBI raids home of Catholic pro-life speaker, author with guns drawn as his terrified kids watch
4
Prophecy: War will break out in Europe after Pope visits Moscow
5
Prayers needed: Canadian mom desperate to save diabetic 23-yr-old from being euthanized Sept. 28
Subscribe to Daily Headlines »