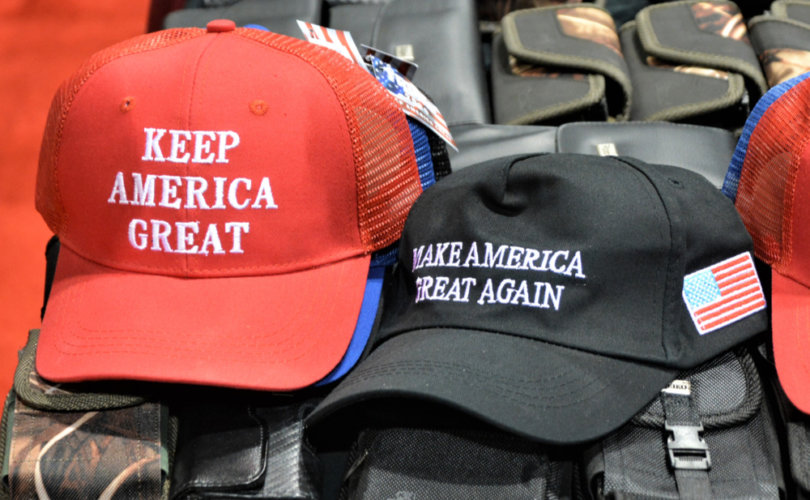 February 3, 2021 (LifeSiteNews) — What a difference a poll makes. A few weeks ago Liz Cheney (R-WY), the number three Republican in the House — for now — convinced nine of her fellow Republicans to vote to impeach President Donald Trump after a show trial lasting just seven hours.

The charge — ludicrous on its face — was one of inciting insurrection. Still, even Kevin McCarthy, the leader of the House Republicans, said during the debate that President Trump “bears responsibility” for the Capitol demonstration.

Then out of Wyoming came a poll showing that nine-tenths of the voters in Cheney’s “home state” of Wyoming (she’s never lived there for extended periods of time) have now disowned her. More than half of her House colleagues agree, making it only a matter of time before this legacy Republican — she owes her position to Daddy Dick and Washington insiders — will soon be voted out of leadership.

She’s now a political zombie, having driven a stake into the heart of her own political career by her impeachment vote. She will be joined on the next episode of The Walking Dead by her nine colleagues, who likewise blew up their political careers for voting to impeach the outgoing president on spurious grounds. Primary challengers for each are already lining up. I’ve never seen anything like it.

Then Rasmussen reported that Trump’s overall approval rating was in the high fifties, and a Politico-Morning Consult poll showed that 56 percent of Republican voters believe he should run for president again in 2024. Add to this an Axios-Ipsos poll taken a few days earlier that showed that 92% of Trump voters wanted the same thing.

The next thing you know, McCarthy — facing a populist rebellion not only from the voters but from among his own Republican members — was flying down to Mar-a-Lago to mend fences with the once-and-future president.

McCarthy had belatedly realized that, if he was to keep his position as the leader of the House Republicans and have any hope of replacing Nancy Pelosi as Speaker of the House in 2022, he needed Donald Trump’s support.

Or, to put it more accurately, he needed the support of the tens of millions of Americans who love life, cherish their families, practice their faith, want good-paying jobs, and long for their country to be great again. And who voted for Donald Trump because he defended them and their beliefs every day while he was in office.

It wasn’t so long ago that both major political parties agreed on such fundamentals, however much they disagreed on such things as tax rates, defense spending, and domestic social programs. But in recent decades the Democrat Party — once regarded as the second most conservative party in the world — has embraced abortion up to birth, attacked the traditional family, disrespected people of faith, and generally given the impression that they regard the Land of the Free and the Home of the Brave as an irredeemably racist, sexist, transphobic hellhole destined to play second fiddle to China.

As the Democrats continued to tout their concern for the poor over the past couple of decades, they have quietly become the party of the super rich. Our new oligarchs — the one who control the high ground of the internet, e-commerce, media, entertainment, and Wall Street — are overwhelmingly Democrats. Because of the quasi-monopolies they enjoy, many have become fabulously wealthy while incomes for tens of millions of ordinary Americans have stagnated. Bezos makes billions by selling cheap goods from China, while running his warehouse workers ragged for a measly $15 an hour.

While the leaders of the two parties continued to mouth the old pieties about big vs. small government, etc., that’s not where today’s societal fault lines lie. American society is now divided between a tiny oligarchy that controls the economic high ground, a shrinking middle class who control less and less, blue collar workers who control virtually nothing, and the poor who basically subsist off the state. Many American institutions have betrayed fundamental American ideals such as equality under the law.

Ask yourself if Congress, the media, or even the FBI represent you, or if they represent the new monied oligarchy. You know the answer. And you also know, or at least suspect, that many in the Republican political establishment are beholden to the oligarchy as well.

Given the vast disparities in wealth and power that now divide us, it was inevitable that a populist party would emerge at some point in protest to the power grab by the oligarchy that in its hubris imagines it can run their lives forever. In 2016, two such candidates emerged: Donald Trump, a social and economic conservative, and Bernie Sanders, a social and economic progressive. Trump won his party’s nomination and so, arguably, did Bernie — twice. The Democrats are better at ballot fraud, however, so he “lost” both times.

Trump didn’t create the populist movement that propelled him into office in 2016, but he was able to effectively articulate both its economic and its social concerns. And, once in office, he followed through on his promises. He brought factories and jobs back from China at the same time that he condemned the wanton slaughter of the unborn. He lowered tax rates at the same time that he appointed originalist judges to protect the First Amendment rights of religious believers. He kept his promise, made in his inaugural address, that “the forgotten Americans are forgotten no more.”

The oligarchs were furious. Their business model involves extracting the maximum amount of wealth from those same “forgotten Americans,” who are supposed to passively accept whatever their new masters dictate lest they be “deplatformed,” “banned” or even “canceled.” The way Americans are being manipulated and mind-controlled by the media, Big Tech, and Hollywood has much more in common with the practices of the Chinese Communist Party than with the laws, customs and habits of the heart that have always characterized American democracy.

Our new ruling class is, I think, under no illusions that the inauguration of Joe Biden ended the populist movement against their rule. The absurd and blatantly unconstitutional attempt to impeach a former president is proof enough of this.

But like all of the previous attempts on Trump’s political life, from the Russia Collusion Hoax to the first impeachment charade, this final attempted political assassination will not only fail, but will make the populist movement stronger. For us, it constitutes just more evidence that the oligarchy hates our champion and, by extension, despises all of us, our values, and even our very lives. We understand that it is not just an effort to impeach Trump, but to impeach all of us.

The oligarchy and its minions in the legacy media, Hollywood, social media, and D.C. have kept up a steady drumbeat of anti-populist propaganda since the election, calling us everything from “domestic terrorists” to “white supremacists.” Given that they crush thousands babies every day in their abortion mills, a good percentage of whom are Black or Hispanic, these appellations should properly be hung around their necks.

I do not think that upwards of 75 million Americans who value life, faith, family and freedom will simply cower in the face of this ongoing abuse.

Those of us in the pro-life movement, who know something about being persecuted and even “canceled” for our beliefs, certainly won’t.