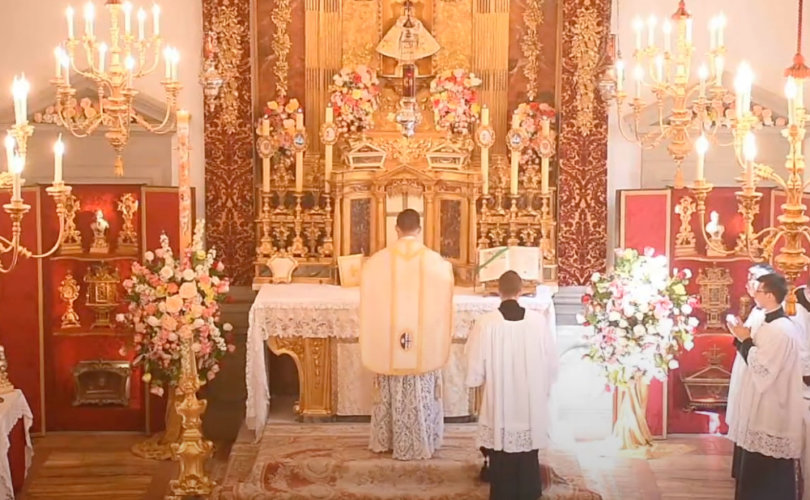 Traditional Latin Mass at the seminary of the Institute of Christ the King, Italy.ICKSP/ YouTube screenshot

(LifeSiteNews) — The recent remarks by an older Irish priest confirm what many of us have known for some time: The post-Vatican II experiment may emphasize a lot of things, but Catholicism is not one of them.

Fr. Brendan Hoban, the priest in the widely criticized video, says he “despairs” over the fact that young clerics want to “wear black,” don beautiful vestments and preach strongly against sin. In fact, his expression and tone suggest he is almost flabbergasted that this is the case.

The priest actually goes as far as to say that he would “prefer” to not have these young priests at all, rather than to have them and have to deal with their traditionalist outlook.

Considering Fr. Hoban is a contributor to the Irish Synodal Way report, which calls for female “priests” and the full inclusion of homosexuality into the Church, it is not all that surprising that he thinks so little of these young men who want nothing more than to dedicate their lives to an authentically Catholic priesthood.

But I think his shock and horror is indicative of a fundamental flaw in the misunderstanding of the traditional Catholic movement among young people, and precisely why this modernist movement is destined to die (as it should).

— Article continues below Petition —
PETITION: We won't give any money to liberal bishops who attack the Faith
Show Petition Text
12164 have signed the petition.
Let's get to 12500!
Thank you for signing this petition!
Add your signature:
Show Petition Text

Young people – including over 500 young Irish Catholics — desire the traditional faith not out of some weird desire to reclaim all things ancient, or because of a rigid or puritanical disposition, but because the world is so fallen and deranged that we need a true shepherd to plainly and clearly direct us toward truth, so we ourselves can avoid despair.

Think of a young college student in the modern age. He likely goes to a school in which rainbow flags are everywhere, a declaration of one’s “pronouns” is compulsory in the classroom, and abortion is taught dogmatically as a woman’s “right.”

Well, then, why would he go to Mass on Sunday? If he agrees with what is being taught in the secular world, he would not. Our culture no longer shames those who apostatize from the faith, and unless he comes from a particularly religious family (the odds are against that too), then he simply sleeps in on Sunday and pays little attention to it.

But if he doesn’t agree with what is being taught, if he knows, as all men do on some level, that there is something wrong with the world, perhaps he looks for a Mass to attend on Sunday in the hopes he can find some solace and reprieve from the demonic onslaught he is subjected to day in and day out.

Well, assuming he has access, it will not be long before he finds the traditional Mass, or at the very least, a Mass offered by a priest who minces no words about the reality of the world and the only known solution.

After all, following a marathon and given both choices, who would want to drink a lukewarm glass of water when a crisp, cold glass is also available?

There exists a precision, an exactness in the traditional faith that is intentionally made ambiguous by the modernists and the New Mass, and as long as that continues (and it will because that’s its purpose), traditionalism will prosper.

The young priests want to preach about sin not out of some odd judgementalism or obsession with the legal nature of morality, but because young people want to hear it!

Sin is proliferating through the culture unabated, practically mocking the Church to finally stand up and strongly condemn it. Yet instead, these synodal-minded priests spend their time trying to get the Church to prop open a door to said sin!

In this relativistic world where nothing can be pinned down or defined, our hypothetical college student is dying to hear what he knows to be true. That some things are actually evil. That the definition of sin is objective, and that the Church still believes this.

He wants to see the Eucharist with awe, and having it distributed into his hand by a member of the laity takes away from this awe.

Our hypothetical young man already knows this world is fallen. What he wants is the solution, the way out.

He is acutely aware that whatever this world is offering is not that solution, and he needs the Church to be there to be that solution, not to conform to the world.

He needs to know that he, as a sinner, has regrettably contributed to what he himself finds unbearable, but that through the sacraments and the Holy Sacrifice of the Mass, even he, a pitiful sinner, can experience the grace of Christ.

Shocking us all, even Hollywood actor Shia LaBeouf has come to understand the importance of tradition, and judging by the facial expression his pro-Latin Mass statements elicited, he was able to figure it out before Bishop Robert Barron!