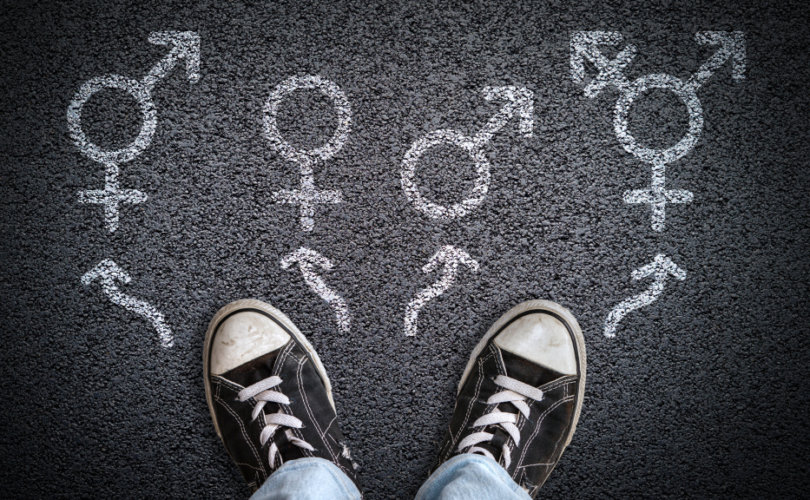 July 4, 2019 (LifeSiteNews) – Despite nonstop promotion from corporations, the mainstream media, the entertainment industry, and progressive politicians, a new set of polls seems to indicate that younger Americans are growing increasingly uncomfortable with the growing extremism of the LGBTQ movement.

Additionally, as the movement shifts into the post-gay “marriage” era and begins to radicalize around gender fluidity, transgenderism, and the rejection of science in favour of self-identification, many of those who were neutral or supportive are deciding that this is where they get off the train.

The statistics are genuinely surprising. According to the annual Accelerating Acceptance report, the number of Americans between the ages of 18 and 34 who are “comfortable interacting with LGBTQ people” dropped from 53% in 2017 to 45% in 2018, which is already a decrease from 63% in 2016. Especially surprising is the fact that this is the only age group that is growing more uncomfortable with the LGBTQ movement—and this is the famously “tolerant” generation. Young women in particular are driving this change, with their comfort levels dropping from 64% in 2017 to 52% in 2018 according to a recent Harris Poll commissioned by the gay activist organization GLAAD.

Other findings triggered dire warnings from John Gerzema, the CEO of The Harris Poll, who stated that the polling was “very alarming” and could “signal a looming social crisis in discrimination.”

For example, 34% of young people said that they would be uncomfortable to find out that their doctor was LGBTQ, as opposed to 27% a year earlier. A full 39% were not comfortable with their child receiving a lesson in school on LGBTQ history, which is a nearly ten point jump from 30% in 2017. And 36% of young Americans indicated that they would be uncomfortable to learn that a family member identified as LGBTQ, as opposed to 29% in 2017.

USA Today pinpointed the reasons for the surprising shift: “The negative shift for the young is surprising, said Sarah Kate Ellis, GLAAD president and CEO. When GLAAD delved into the numbers, the group found that the younger generation was coming into contact with more LGBTQ people, particularly individuals who are non-binary and simply don’t identify as lesbian or gay. ‘This newness they are experiencing could be leading to this erosion. It’s a newness that takes time for people to understand. Our job is to educate about non-conformity,’ she said.”

In other words, the LGBTQ movement may have pushed the culture too far. Many people accept the idea that the government should stay out of people’s sex lives. A majority of Americans also came to believe, over the past two decades, that gay people should be permitted to get “married” (a process described incisively by Darel Paul in his 2018 book From Tolerance to Equality: How the Elites Brought America to Same-Sex Marriage.) But most people simply do not believe that women can have penises, that men can get pregnant, or that gender is fluid. The simple fact is that to most people, “non-binary” and other ever-shifting and multiplying categories are simply nonsense.

Young people also have a front-row seat to the chaos the LGBTQ movement is wreaking on their schools. Biological males in the girl’s bathroom, biological males destroying the female competition at women’s sporting events, the utter confusion of transgenderism, transition, and the LGBTQ indoctrination—they have lived these things, and it is notable that much of the pushback to this agenda is coming from young people, not from adults. It is teenage girls who are suing their schools over bathroom privacy and biological males in female sports competitions. Their childhoods are being turned into battlefields in the culture wars, and many of them are profoundly unhappy with this.

The LGBTQ movement has now surged forward so swiftly that even many activists who championed same-sex “marriage” find themselves bewildered and out of step. LGBT activists are attempting to use an entire generation as the guinea pigs in a massive social experiment with gender fluidity and sexuality, and many of those guinea pigs, as GLAAD’s own polling indicates, are very unhappy with it. I only hope that the pushback to the LGBTQ agenda will strengthen, persevere, and herald a return to sanity.

Jonathon’s new podcast, The Van Maren Show, is dedicated to telling the stories of the pro-life and pro-family movement. In his latest episode, he interviews Jason Jones about the pro-life movement. Jones began working in the pro-life movement while attending the University of Hawaii. His work within the movement progressed from forming the Pro-Life Student Union to include Director of Hawaii Right to Life and Public Relations Director for Human Life International. He is the president and founder of HumanRights Education Organization and Movie to Movement. You can subscribe here and listen to the episode below: