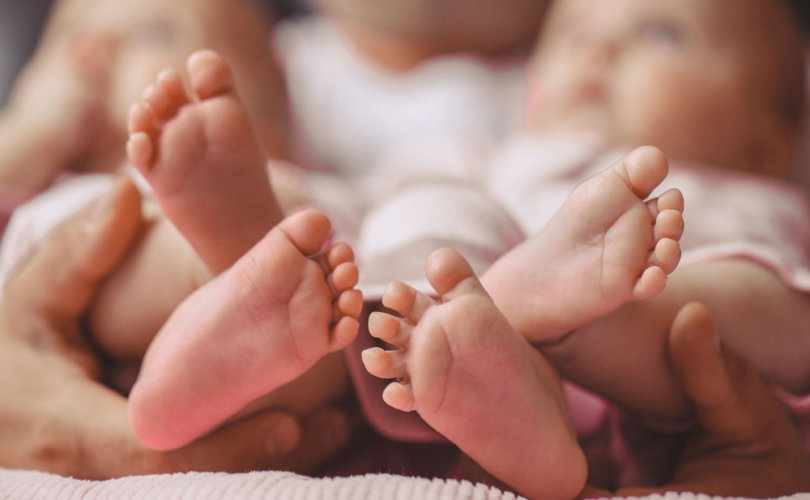 (LifeSiteNews) — Whether you’re reading the latest news, listening to young people belittle the thought of motherhood or watching women walk into an abortion clinic, it’s easy to become discouraged as a pro-lifer.

You’re probably accustomed to bad news and a long, hard fight. But our mission is built firmly on hope. And then, perhaps when we feel like it can’t get any worse, God offers the gift of a light so bright that it outshines even the most unsettling darkness. Today, that ray of hope comes in the form of the story about a young woman named Brooke.

A recent Twitter thread shared highlights from a Washington Post article about an 18-year-old who wanted an abortion but ended up with twins instead. Brooke learned of her pregnancy just a few days before Texas instituted its Heartbeat Act, banning abortions once the baby’s heartbeat is detected. She received a free ultrasound from a pro-life pregnancy center, where she saw her children for the first time.

Brooke and her boyfriend (now husband) Billy never looked back.

This story is so simple yet so powerful. It doesn’t involve a public conversion and a dramatic turning away from an abortion clinic. It involves two young people who had the power to either have their children killed or live their lives for the sake of those children.

It’s easy to get caught up in the trend to join protests and prayer groups at national rallies or outside nearby abortion clinics. Both are good things, but God doesn’t always work miracles for a public display. Brooke’s story became publicized because of its unique timing in the history of abortion restrictions. But she made the decision to give birth to her children because of the witness to truth.

Texas lawmakers served as her first witness against abortion when they banned killing babies with detectable heartbeats. Then, there was the pregnancy center whose religious backbone and mission is to defend and support life. The third witness (and arguably most effective) was the ultrasound, the very first picture of her two babies.

As active members of the pro-life mission, our best move is to be a witness to life. This can be in countless forms — raising a family, supporting the poor, volunteering at a pro-life pregnancy center, befriending a lonely neighbor — everything that we do should spread the message of life. This story is an inspiring reminder of what God can do with a simple, daily witness to the truth.

Through the witnesses in the story, Brooke and Billy not only chose life for their children, but they have started a new chapter in which they, too, will live as witnesses to truth and life.