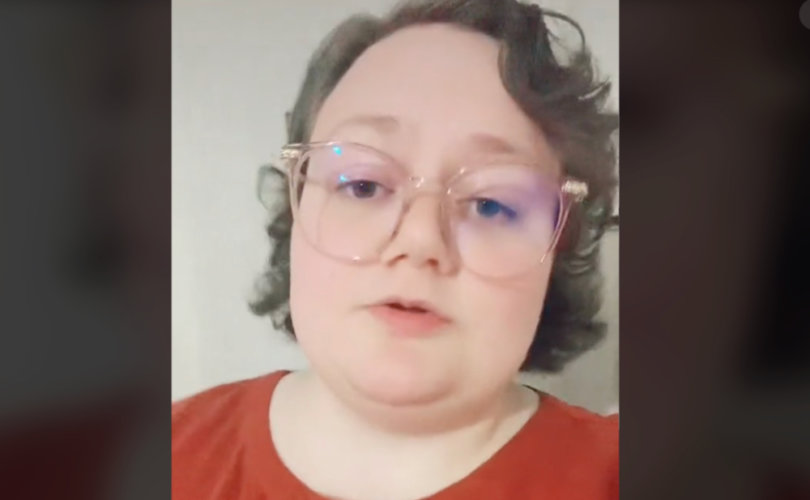 Sam, in a video explaining her 'de=transitioning.'TikTok screenshot

(LifeSiteNews) — What does it take to get medical professionals to sign off on sex change surgeries for those suffering with gender dysphoria? According to one young woman, a mere two and a half hours of counseling.

Sam is a 26-year-old woman from the Midlands in central England who began to wonder if she might be male at the age of 21, after many identity struggles throughout her teen years. When she discovered the online transgender collective, she wondered if she might also be transgender. Their testimonies of transition bringing happiness appealed to her. She sought medical help, but was told that a backlog meant that getting an appointment with the National Health Service (NHS) would be at least two and a half years. She began to explore private options instead.

She procured an appointment, told the doctor that she identified as a “transgender man” (after a bit of Googling), and after only two appointments, found herself cleared to take hormones and have her breasts removed. Armed with a prescription for cross-sex hormones, she began taking them in December of 2017, and procured a double mastectomy a mere five months later, despite the rules stating that patients must have identified as male for a minimum of a year prior to this (permanent) surgery.

The effects were almost immediate. As Sam tells it:

I was able to have the surgery just a year and nine months after I first discovered trans people. I was so happy after the surgery because I had been binding my breasts for years. It felt like a huge relief. The hormones worked really quickly and within a few months, my voice had dropped, I grew body and facial hair and even developed a micro penis.

My hairline also began to recede a little, and I noticed a huge change in my emotions. Whereas I’d once been a very emotional person, it felt as though the testosterone had numbed the heights of my emotions. Nothing made me feel incredibly happy, and nothing made me incredibly sad any more. I had moved from working in childcare to working in a very male-dominated job working with trains, and when I first met people, nobody knew I had transitioned from female.

Only two years after her surgery, Sam began to suffer more serious side effects. By mid-2020, vaginal atrophy set in. Those entering transition are almost always unaware of the fact that sex change surgeries can turn them into lifelong patients, with many aspects of their existence abruptly medicalized. Vaginal atrophy is when the female sex organ tissue begins to die due to the absence of the female hormones which keep the vagina healthy. Vaginal atrophy contributes to risk of cancer. In Sam’s case, it led to awful pain. She began to have second thoughts.

— Article continues below Petition —
Parents' Pledge: We will pull our children out of explicit sex-ed classes
Show Petition Text
3958 have signed the petition.
Let's get to 4000!
Thank you for signing this petition!
Add your signature:
Show Petition Text

When her originally scheduled NHS appointment finally arrived, Sam told the doctors that she wanted to de-transition. She was stunned when they told her that her only option was a hysterectomy, which she did not want.

“I wasn’t prepared to have a hysterectomy at the age of 24,” she said. “I felt distressed as didn’t feel properly informed about the side effects that came with taking testosterone.”

I was experiencing imposter syndrome. I didn’t feel like the other men I was around, and I felt like I was constantly pretending. So I started questioning why I wanted to identify as a man. I didn’t want to regret my decisions but I was no longer comfortable living as a male. I researched more and I discovered a group of detransitioners, so I explored the femininity that I had suppressed for all of these years and I came to accept that I was female. Against the advice of my doctors, I stopped taking my hormone medication.

Sam now speaks about her experience to warn others of the dangers of rushing into transition. “Although I still love having a flat chest, I won’t be able to breastfeed if I ever have children and it has taken away the opportunity to learn to love my womanhood,” she explained.

I don’t want to put my body through breast reconstruction but I know that I would’ve learnt to love my body in its entirety. I have also started to menstruate again, which took around a year to come back to after I stopped taking testosterone, although I have been left with excess body hair and a deeper voice.

“I am talking about my experience,” she said, “because it is important to discuss these topics because, using their hindsight, detransitioners can help spot red flags and help others when it comes to making these important decisions.”

My family have always been supportive of me, but I have found that quite a lot of friends have drifted away since I have detransitioned. There seems to be a huge emphasis in society in supporting trans people, almost to the point that it is seen as what I did as being anti-trans. When I told people I was transitioning to male, I was met with overwhelming excitement and support from my friends. But when I revealed I would be reversing the process, I was met with questioning and distance from so many people I considered to be friends. The people who matter to me are here for me and I am in a much better place now and looking forward to the future.”

The entire culture encourages gender transition, and frowns on de-transition as an experience that threatens the basic tenets of transgender ideology and biases people against rapid transition. Most de-transitioner voices are shouted down. It is for precisely that reason that Sam is speaking out.

“I have been through the process and regretted my decision, so I feel like I am in a good position to share a different perspective about what should be done differently to help people who are questioning their identity,” she explained. “The industry is under huge pressure from the trans community to move things along quickly because of statistics around suicide. This frightened me into feeling I had to do everything as quickly as possible to avoid feeling that way.”

There are thousands just like her, and we are finally starting to hear their tragic stories.