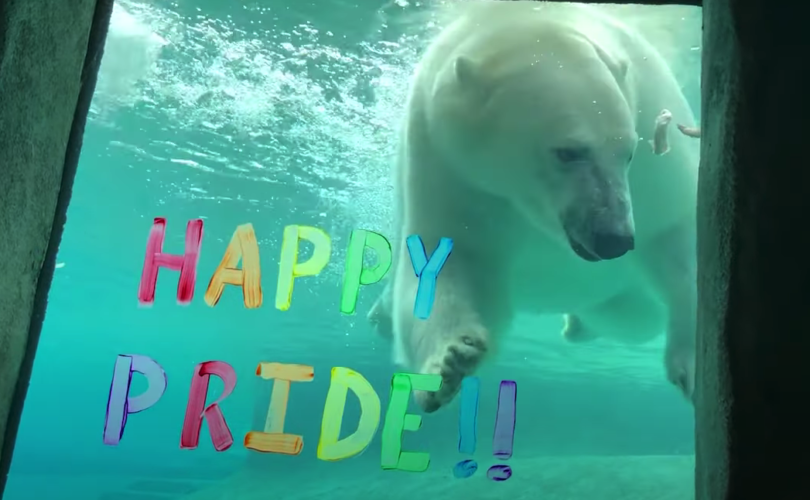 (LifeSiteNews) – In a brilliant essay for World Magazine earlier this month, Carl Trueman laid out why “Pride” Month is so important to LGBT activists and their political allies:

It is a basic fact of history that if you control time and space, you also control the culture. The early Christians of the fourth century knew that as they slowly but surely claimed space in pagan Roman culture for churches and marked the rhythm of time with the development of the liturgical calendar. And all sides in our current political divisions know this as well. It is why debates about the naming of Columbus Day and the status of Confederate statues and the flag of the Confederacy are such contentious topics. These arguments are not just about the things themselves. They are about who owns time and space. In short, they are about who owns the culture’s memory and imagination.

This makes Pride Month something with which no Christian should have any sympathy whatsoever. It marks the beginning of summer with a dramatic assertion of human autonomy and the sovereignty of individual desire. The rebels take over time. And with their flags and their parades they assert ownership over space—public, commercial, virtual, and even—via yards signs and symbols on social media posts—personal and private. It is not about what the state allows consenting adults to do in the privacy of their bedrooms. Far from it. Rather, June witnesses as comprehensive an attempt at cultural revolution as one is ever likely to see.

That is the best explanation I’ve seen so far for a question I’ve heard from many exasperated people as the “Pride” flag slowly covers everything like creeping ivy: Really? Why that, too? Children’s entertainment; bank kiosks; supermarkets; nothing, regardless of how disconnected it is from sexual politics, is exempt. This is primarily about the occupation of all public spaces by LGBT activists staking their territory—territory that was once our territory.

READ: Why are Democrats so adamant in wanting kids to attend drag shows?

Consider a recent example that just came to my attention: zoos. It’s pretty hard to figure out what zoos have to do with the LGBT movement, although they have occasionally queered a couple of penguins in order to attract some attention and collect a few accolades from activists who feel that two same-sex animals in the same cage affirms them in some way. But there it is—Toronto Zoo has an entire “Pride” Month lineup of events, complete with (of course) a nocturnal drag show and the Toronto Zoo Drag Queen Story time (for the kids, you see).

The San Antonio Zoo, meanwhile, is “roaring into Pride Month” with a “Night Out at the Zoo” as their “official kick-off to Pride Week.” Kendoll and Kristi Waters, two drag performers, will be hosting the event, and president and CEO of the zoo Tim Morrow—who surely never thought that organizing drag shows and celebrating the LGBT movement would be part of his job description when he was getting into the zoo business—issued a press release expressing his… well, pride in the zoo’s participation:

We are thrilled to kick off the first-ever Pride Week in San Antonio. This is truly a historical moment that we are honored to be part of. Diversity, equity, and inclusion are essential to maintaining a vibrant and flourishing community.

The San Diego Zoo echoed the sentiment with a “Pride” Month photo of a beautiful bird that is apparently also homosexual probably, and a zoo in Wales one-upped them by once again producing “gay penguins” who are, we are told, “celebrating Pride.” (I wonder what science they’re following these days.) The Lincoln Park Zoo in Chicago is hosting the obligatory “adults night out” for “Pride,” and the Potawatomi Zoo is partnering with the LGBTQ Center to host a “Potawatomi Zoo for Pride Night” where people could “go to the zoo and meet others while supporting the advocacy group.”

Toronto’s Ripley’s Aquarium got both woke and witty with their invitation to “celebrate Pride Month” with “our fourth annual Night at the Aqueerium,” in which you can “dive into all the colours of the rainbow and dance the night away with music by DJ Cozmic Cat & Lucie Tic while enjoying live entertainment by the Spice Queens” and “get your gills flappin’” (I’m not sure what that means and will most certainly not be Googling it).

READ: How does Kamala Harris hugging a nearly-naked drag queen uphold the ‘dignity of the office’?

Showing support for the LGBT movement is, in most Western countries, a public virtue-signal to everyone that you are on the Right Side of History, which is to say the last two decades. That’s why politicians march obediently in “Pride Parades” behind their scantily-clad cultural overlords, and its why zoos are hosting drag shows for kids. This is a colonization, and it is nearly complete.