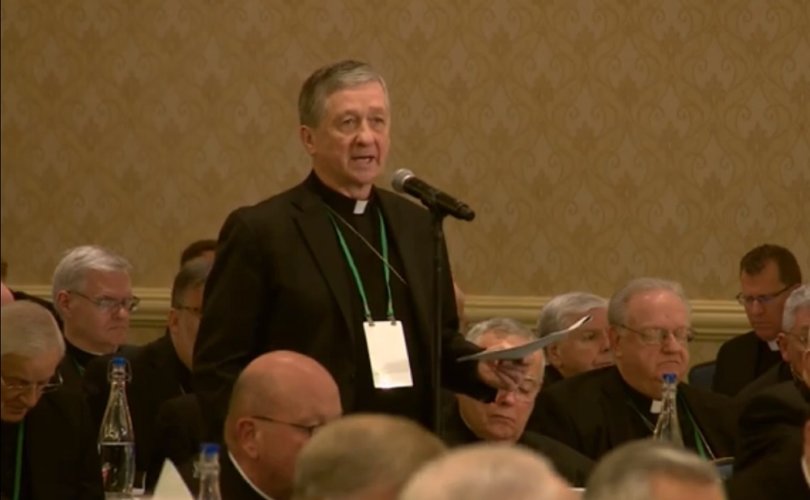 BALTIMORE, Maryland, November 12, 2019 (LifeSiteNews) — American Catholic bishops showed today that the current pontificate has divided them on fighting abortion as a social justice priority. They voted 143-69 against including a full quote by Pope Francis in their document on citizenship that downplayed the issue and which one bishop argued was necessary to keep the bishops' priorities in line with the Pope's.

This morning during the Fall General Assembly of the United States Conference of Catholic Bishops (USCCB), the bishops debated, and voted upon, a letter based on the USCCB’s document on political life, “Forming Consciences for Faithful Citizens.”

The letter’s insistence that the slaughter of the unborn remains the “pre-eminent” social justice priority for the USCCB came up during the debate. Bishop Robert W. McElroy of San Diego objected, saying, “It is not Catholic teaching that abortion is the pre-eminent issue that we face as the world in Catholic social teaching. It is not.”

McElroy also said he believes that saying the threat of abortion remains the USCCB’s “pre-eminent priority” is “at least discordant with the pope’s teaching if not inconsistent” and that it is a “grave disservice to our people if we’re trying to communicate to them what the Magisterium teaches.”

The bishop of San Diego was contradicted by Bishop Joseph Strickland of Tyler, Texas and Archbishop Charles J. Chaput of Philadelphia. Strickland stated that the word “pre-eminent” must remain in the letter, and Chaput underscored that abortion is indeed the most important social issue of our time.

“I am against anyone stating that our saying it’s ‘pre-eminent’ is contrary to the teaching of a pope because that isn’t true,” Chaput said.

“It sets up an artificial battle between the Bishops’ Conference of the United States and the Holy Father which isn’t true,” he continued.

“So I don’t like the argument Bishop McElroy uses. It isn’t true, you know. We support the Holy Father completely. What he says is true. But I think it has been the very clearly articulated opinion of the bishops’ conference for many years that pro-life is still the pre-eminent issue. It doesn’t mean the others aren’t equal in dignity.”

The debate began when Cardinal Blase J. Cupich of Chicago asked (see video below at 49:25) for an amendment to the short letter that would include the entire paragraph 101 from Pope Francis’s controversial 2018 apostolic exhortation “Gaudete et Exsultate.”

“[Francis] speaks about the need to make sure we avoid those kind of ideological frameworks that our society today is so paralyzed in our political discourse by, but also he wants to make sure as we see here that not only do we avoid that, but we engage one another,” Cupich said.

“He also makes sure we do not make one issue that a political party or group puts forward to the point where we’re going to ignore all the rest of them. And then he also names some that we don’t name in our document,“ he continued.

Cupich was particularly interested in including the final line of the paragraph: “We cannot uphold an ideal of holiness that would ignore injustice in a world where some revel, spend with abandon and live only for the latest consumer goods, even as others look on from afar, living their entire lives in abject poverty.”

The archbishop of Chicago cited the recent speech by the nuncio to the USA regarding the “Magisterium of Pope Francis.”

“From my perspective it is making sure that we are, as we heard from the nuncio, looking at the particular Magisterium of Pope Francis for us in this very important document,” he said.

Archbishop José Gomez said that the drafting committee did not include the full passage from Gaudete et Exsultate because it asked for a brief document.

McElroy said he supported Cupich’s amendment for his reasons but also for another:

What has been added to this letter that was not in the previous forms is a statement, I believe, that is at least discordant with the pope’s teaching if not inconsistent. The top of the second page of the letter, it says, “The threat of abortion remains our pre-eminent priority because it directly attacks life itself.” This is taken from the previous statement, but I believe it is not in keeping with that quote from the Holy Father. And this “pre-eminent” quote will be used to in fact undermine the point Pope Francis is making in that paragraph. So either we should get rid of “pre-eminent,” or if we are going to keep “pre-eminent” in there, let’s at least give the pope a fighting chance with his view to keep that whole paragraph in there because that’s where he articulates his vision of this very controversial question. This is the most important focal point of this letter … and it totally changes the nature of the letter because it will allow people to use it to say, “This does overcome all the other issues.” It is not Catholic teaching that abortion is the pre-eminent issue that we face as the world in Catholic social teaching. It is not.

The bishops were asked to vote to approve the text as presented by Gomez. Of the bishops, 143 voted yes, and 69 voted no. Four bishops abstained.

Strickland tweeted, “Thank God the USCCB voted to uphold the preeminence of the Sanctity of the life of the unborn. It is sad that 69 voted no.”

At the subsequent press conference, JD Flynn of the Catholic News Agency (CNA) asked panelists if the USCCB thinks abortion is the “pre-eminent social priorty of our time.”

Bishop Michael F. Burbidge of Arlington, the chairman of the committee on communications, stated that the word “pre-eminent” is in the document.

Cardinal Joseph Tobin of Newark agreed that abortion is the pre-eminent social issue but also suggested that those who consider it the only issue should consider others.

“Yes, it is the pre-eminent,” Tobin said. “I mean, the vote makes that obvious.”

“I think that there’s a value in that because it’s not in any way to be interpreted as one-issue politics. A challenge I think for people who are thinking and rational is to form an opinion on the question of abortion when the unborn child is disappeared from the debate. It’s conducted on a different status,” he continued.

“However, the challenge is to help people who want to consider this as the single issue to consider others.”

Pope Francis’s famous paragraphs in Gaudete et Exsultate diminishing the evil of abortion as merely one of a number of social problems are 101–102. In Paragraph 101, the pontiff accuses those who object to “the social engagement of others” of harboring a “harmful ideological error”:

101. The other harmful ideological error is found in those who find suspect the social engagement of others, seeing it as superficial, worldly, secular, materialist, communist or populist. Or they relativize it, as if there are other more important matters, or the only thing that counts is one particular ethical issue or cause that they themselves defend. Our defence of the innocent unborn, for example, needs to be clear, firm and passionate, for at stake is the dignity of a human life, which is always sacred and demands love for each person, regardless of his or her stage of development. Equally sacred, however, are the lives of the poor, those already born, the destitute, the abandoned and the underprivileged, the vulnerable infirm and elderly exposed to covert euthanasia, the victims of human trafficking, new forms of slavery, and every form of rejection. We cannot uphold an ideal of holiness that would ignore injustice in a world where some revel, spend with abandon and live only for the latest consumer goods, even as others look on from afar, living their entire lives in abject poverty.

102. We often hear it said that, with respect to relativism and the flaws of our present world, the situation of migrants, for example, is a lesser issue. Some Catholics consider it a secondary issue compared to the “grave” bioethical questions. That a politician looking for votes might say such a thing is understandable, but not a Christian, for whom the only proper attitude is to stand in the shoes of those brothers and sisters of ours who risk their lives to offer a future to their children. Can we not realize that this is exactly what Jesus demands of us, when he tells us that in welcoming the stranger we welcome him (cf. Mt 25:35)? Saint Benedict did so readily, and though it might have “complicated” the life of his monks, he ordered that all guests who knocked at the monastery door be welcomed “like Christ”, with a gesture of veneration; the poor and pilgrims were to be met with “the greatest care and solicitude”.

In an interview six months into his pontificate, Pope Francis recommended that the Church pull back from her perceived emphasis on “abortion, gay marriage [sic] and the use of contraceptive methods,” saying it is “not necessary to talk about these issues all the time.”

Such comments differ from those of Francis’s two predecessors.

Speaking specifically to the proclamation of the Gospel, John Paul II wrote in his 1995 encyclical on the Gospel of Life that the Church’s teaching on the respect for life should be taught “constantly and courageously.”

“To be truly a people at the service of life we must propose these truths constantly and courageously from the very first proclamation of the Gospel, and thereafter in catechesis, in the various forms of preaching, in personal dialogue and in all educational activity,” he wrote.

Nov. 13, 2019 update: This report now clarifies that the vote was over including a full paragraph from Pope Francis that downplayed the issue of abortion and which one bishop argued was necessary to keep the bishops' priorities in line with the Pope's.