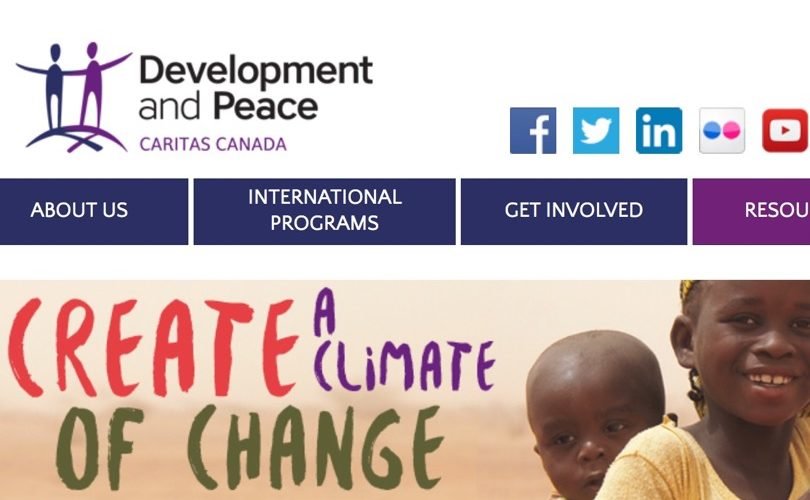 TORONTO, November 23, 2018, (LifeSiteNews) – Although the Canadian Conference of Catholic Bishops’ review of its charitable arm is still “ongoing”, almost all of the dioceses that withheld 2018 donations from Development and Peace (D&P) have now released them to the organization.

According to Toronto’s Catholic Register, ten of the twelve bishops holding funds earmarked for D&P “quietly removed restrictions and forwarded the money” to the charity this October. Only two bishops, Cardinal Thomas Collins of Toronto and Archbishop Richard Smith, are still waiting for the investigation to end before releasing their dioceses’ donations.

This money was collected from Canadian Catholics during the 2018 ShareLent/ShareLife appeal this spring.

“We are very sure that it’s not going to find that we have promoted such as [sic] thing as abortion,” said Romain Duguay, D&P’s deputy director. “We are sure we haven’t done anything wrong.”

Nevertheless, the controversial charity’s executive director Serge Langlois recently wrote a letter to the heads of regional D&P councils to say that the charity had suspended funding to 52 of their partners as a result of an investigation carried out at the behest of the CCCB.

“The CCCB representatives on this committee identified 52 partners who, according to data obtained online, posed some questions regarding their respect for the teachings of the Church,” Langlois wrote on November 16.

An interim report of the CCCB’s review to the Western and Northern bishops’ assembly in February revealed that the international agency had partnered with 40 agencies in developing countries that support either abortion, contraception, homosexuality, or gender ideology.

Bishop Gary Gordon of the Diocese of Victoria stated in a letter dated April 18 that  “credible investigations” documented “serious issues regarding a number of these partner agencies that contradict the moral teachings of the Catholic Church.”

As a result, twelve Canadian bishops announced that they were withholding 2018’s ShareLent/ShareLife donations until their questions about D&P’s partnerships were answered.

These official investigations followed several years of in-depth research and reporting by LifeSiteNews into D&P’s partners, beginning in 2009. Last year, Latin American correspondent Matthew Hoffman produced a four-part series revealing that the Catholic charity has been funding several organizations that actively promote the depenalization of abortion in Latin America and Haiti.

“Many of the groups are also heavily involved in anti-family activities that clearly violate Catholic teaching, such as promoting gender ideology, marching in ‘gay pride’ parades, advocating for the legalization of same-sex ‘marriage,’ and supporting LGBT film festivals,” Hoffman wrote.

Canadian bishops have collectively or individually responded to complaints concerning the funding of pro-abortion or homosexualist groups by Development and Peace on several occasions in recent years.

One of the most notable was in 2011 when Ottawa Archbishop Terrence Prendergast confronted Father Luis Arriaga of Centre Miguel Agustín Pro Juárez Human Rights about the accusations against the group and asked him to sign a statement supporting the right to life from conception to natural death, Arriaga reportedly refused on the grounds that such a statement would be “a violation of basic human rights.”

Archbishop Prendergast then decided to cancel all of Arriaga’s speaking engagements, and issued a statement condemning the “human rights” group.

“Since the Centre’s support of groups in favour of abortion rights in Mexico is incompatible with the Church’s defence of the right to life from conception to natural death and the mission of Development and Peace, and in order to remove any doubt about this commitment, the speaking engagements of Fr. Arriaga have been cancelled,” Prendergast wrote.