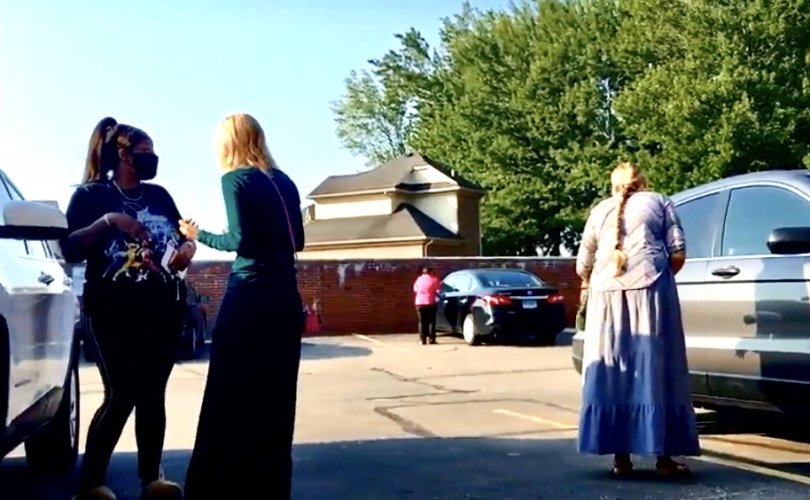 Pro-lifers talk with women outside the Northland Family Planning Centers abortion clinic in Sterling Heights, Michigan, before they were arrested.Chet Gallagher

STERLING HEIGHTS, Michigan, August 28, 2020 (LifeSiteNews) – Ten pro-life activists were arrested yesterday for blocking access to an abortion business in Sterling Heights, Michigan, just outside of Detroit, in an attempt to stop unborn babies from being killed in the facility.

The Christian pro-lifers showed up at Northland Family Planning Centers on Thursday morning, beginning their “rescue” minutes before 9 a.m.

The term “rescue” refers to people blocking access to an abortion center to prevent unborn babies from being killed, or entering the waiting room and directly interacting with mothers who are scheduled for an abortion.

Cal Zastrow, one of the pro-lifers present at the abortion center, told LifeSiteNews that the people blocking the door were praying and singing, and “sidewalk counselors went into the parking lot and talked to the moms.”

Several babies were saved. “We know of three moms that left and didn’t come back,” he reported. “And there were more turnaways, too. We’re not even sure if they killed in the afternoon or not.”

After about an hour, police showed up. “They weren’t angry, hostile,” Zastrow said. “They tried to persuade us that we could be more effective working through the political process through (Michigan capital) Lansing and Washington, D.C. And we talked about that.”

On its Facebook page, the “Feminist Flag Corps” lamented that pro-life activists and police were having a civil discourse.

“One officer (Mike) buddied up with anti leader, Chet Gallagher, while transporting him to the jail where he was assured he would get a ticket for a small fine and be immediately released,” the group wrote. “Unbeknownst to this officer, Chet’s phone, which was in the officer’s custody, was livestreaming the entire time.”

“He told Chet that he sympathized with his cause, as did the other officers there, and that ‘These people are gonna answer for this one day’ in reference to those at the clinic. He expressed his disgust with clinic clients and ‘liberal legislators.’ He also was preoccupied with how Chet was going to portray him on social media, wanting to not be ‘demonized.’”

Zastrow explained, “They took us to the city jail. And then we were all charged for trespassing. And someone paid a hundred dollar bond. And so we all got out of jail that same day.”

He said the 10 pro-lifers have an attorney who would represent them should the city decide to take the case to court.

“It was a joy. It was a blessing,” Zastrow summarized. “And I invite more people to do more peaceful rescues. Let’s have more of them.”

Northland Family Planning Centers, with its three abortion centers in the Detroit area, was founded by Renee Chelian, who was featured in one of David Daleiden’s videos exposing the sale of aborted babies’ body parts.

While the original video has been removed from YouTube, an article published by The Detroit News in 2015 reported on its content extensively.

Chelian talked “about her dilemma when she anticipated her medical-waste vendor would stop accepting the remains of aborted fetuses. It prompted her to contemplate a drive to northern Michigan to get rid of them herself.”

“I had five months’ worth of fetal tissue in freezers, and we were renting freezers to put them in. It was all I thought about,” she said. “I was so consumed with fetal tissue, I was ready to drive to northern Michigan and have a bonfire. I was just trying to find out how I wouldn’t get stopped, or how far into the woods I would have to go to have this fire that nobody was going to see me.”