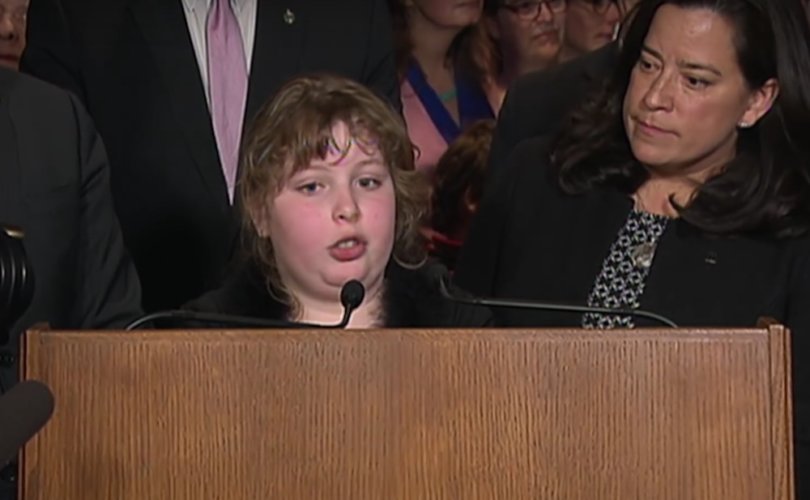 Charlie Lowthian-Rickert, 10, was selected by Ottawa’s gay pride committee for his activism.

OTTAWA, August 9, 2016 (LifeSiteNews) – The Ottawa Gay Pride Parade will be led by 10-year-old boy who identifies as a girl in a move that pro-family leaders see as harmful and exploitive.

Charlie Lowthian-Rickert, 10, was selected by Ottawa’s gay pride committee for his activism, along with his parents, in fighting amendments to last year’s so-called “bathroom bill” admitting transgenders to federally-run public washrooms of the opposite sex.

Lowthian-Rickert also appeared with Justice Minister Jody Wilson-Raybould on May 17 on Parliament Hill when the latter tabled Bill C-16, which amended human rights legislation to protect against discrimination based on gender identity. The child’s mother, Anne Lowthian, told the Ottawa Citizen that when she heard the news,  “I started to cry because it was just such a wonderful thing for Charlie to be recognized for all the things she does. She’s an amazing kid.”

But Dr. Michelle Cretella, president of the American College of Pediatricians, a voluntary group of conservative-minded doctors, was highly critical.  “This unfortunate 10-year-old child is being exploited by adult transgender activists in order to normalize their own mental illness and procure special rights,” she told LifeSiteNews.

Gwen Landolt, the head of REAL Women of Canada, was equally skeptical. “The Children’s Aid Society should be looking at this child’s parents. They are obviously inadequate in dealing with the problems,” she told LifeSiteNews.

Two other honorary marshals have been selected from the United States: a Native American male-to-female poet named Chrystos and a female-to-male transgender model and former student Laith Ashley de la Cruz. Their airfare to Ottawa has been paid by a grant through the American embassy.

REAL Women’s Landolt said parents are wrong to encourage children to doubt their gender because gender dysphoria leads to “hardship and often suicide.” Moreover, “there is no science behind it [transgenderism].”

Parents accepted propaganda generated by the “so-called media and academic elites in the Ottawa-Toronto-Montreal axis without critical analysis,” Landolt added.

Cretella agreed. She told LifeSiteNews that studies of transsexual adults who had twin siblings indicated only 20 percent were also transsexuals, proving gender dysphoria is not “innate” and that “no one is born in the wrong body.”

Cretella said the emotional anguish experienced by some gender-confused children is “real, but the suffering is not caused by a lack of social affirmation but by whatever is the underlying cause of the dysphoria, be it depression, or parental discord.”

“I am personally aware of cases in which the cause was subtle family dynamics, a relationship situation outside of the family, and, in other cases, sexual abuse.”

She added that parents sometimes encourage their children’s gender dysphoria “in order to avoid examining their own psychological lives.” But more often they are simply misled “by the mainstream culture, which sadly, now includes many in medicine and psychiatry.”

Landolt added another motive. Some parents, she believes, want to be seen as “progressive.”

Dr. Joseph Berger, a prominent Ontario psychiatrist and critic of transgenderism, called the selection of a child to lead the parade “exploitation of a very ugly nature,” adding, “A 10-year-old is clueless about the real issues concerning so-called 'transgender.'

“If a child is allegedly 'transgender,' any responsible therapist would surely want to deal with the parents and see what problems the parents have that are being expressed through the child's bizarre behavior.”