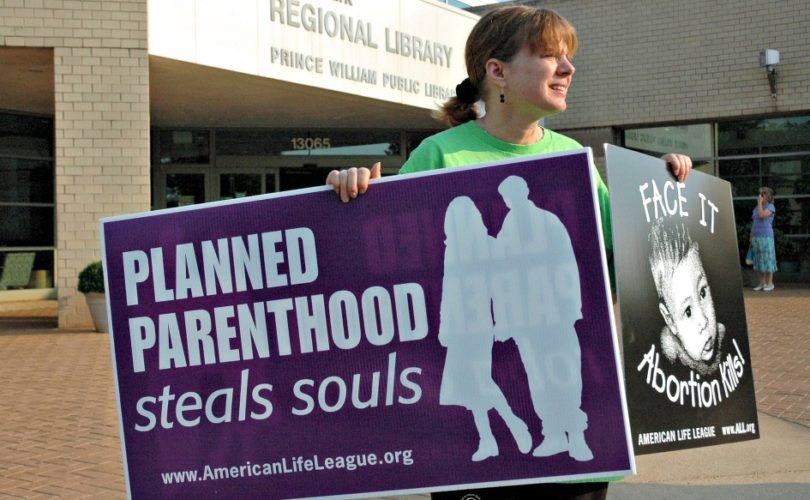 SAN ANTONIO, TX, March 31, 2015 (LifeSiteNews.com) — The Church is on the ground in San Antonio, Texas, fighting a major abortion expansion by Planned Parenthood that threatens the predominantly Hispanic population all across South and West Texas. If the effort fails, the abortion giant will stretch its massive tentacles across thousands of square miles of Texas to bring in women from as far as Harlingen, Brownsville, and El Paso to the San Antonio regional location for abortions.

Leaders of the broad coalition to stop Planned Parenthood in San Antonio are calling for 1,000 people to show up at San Antonio City Hall chambers on April 1 to speak out against Planned Parenthood’s stealth entry into the quiet, residential neighborhood in the medical center area of San Antonio. The organizers ask that all attendees wear blue so the council members can easily see the huge amount of opposition in the community to the opening of Planned Parenthood’s 22,000 square foot abortion center. More details about the meeting are available on the San Antonio Family Association Facebook page.

The renovated PP facility at 2140 Babcock has been dubbed “2140 Auschwitz” by local activists based on Planned Parenthood’s estimate that 2,800 babies will die there the first year—a number these activists say is intentionally understated. Planned Parenthood South Texas CEO Jeffrey Hons said that the facility would open March 1. Patrick Von Dohlen—head of San Antonio Family Association and a leader of the coalition effort to stop Planned Parenthood—estimates that a minimum of 280 babies’ lives have been saved so far by ongoing efforts to block the opening of the facility.

Archbishop García-Siller expressed his deep concern about the abortion expansion recently: “I am deeply troubled by Planned Parenthood’s San Antonio abortion center, the largest abortion facility in South Texas . . . as well as any abortion center built at any time and in any location. This great city, named for St. Anthony, built upon the legacy of the old Spanish missions and nourished by the faith of her people must not become known as the abortion center of South Texas. This would be a betrayal of the values that built San Antonio.”

The archbishop went on to warn city leaders against making exceptions to facilitate the opening of abortion facilities, such as the unilateral zoning exemption that was made by a city employee to clear the way for a certificate of occupancy for the PP facility—a certificate that has yet to be issued, due to the diligence of the pro-life opposition.

The archbishop stated: “I strongly encourage our city leaders to only make exceptions and exemptions in implementing and interpreting our laws in ways that will strengthen our support for the dignity of all human life and the common good. It is their responsibility to preserve the fundamental liberties that define us, the first of these being the right to life. I also ask all people who share these values to join me in prayer for those who fight to protect all human life.”

City officials have put up roadblocks to the countless attempts by local residents to be heard regarding the harm the community will suffer at the hands of Planned Parenthood.

Opposition is growing, thanks in no small part to the efforts of two retired bishops who now live in San Antonio. The 40 Days for Life closing prayer vigil on March 28 at the yet-to-open Planned Parenthood facility brought over 340 souls—the largest crowd yet to stand against the opening of the center.

The crowd was in response to a call to action by Bishop Emeritus Michael David Pfeifer (retired, San Angelo) who lives in San Antonio. During his talk at the San Antonio Family Association’s Defend Life, Family & Freedom Benefit Dinner on March 20, he issued a challenge.  He asked that 200 people show up on March 28 to peacefully, prayerfully oppose the opening of the abortion center.

The bishop also encouraged people to pick up the phone—as he himself has done—and call city officials and contractors working on the Planned Parenthood building in an attempt to stop its opening. Bishop Pfeifer led the charge in closing Planned Parenthood facilities in San Angelo and Midland, Texas. Both were within the geographical boundaries of the San Angelo diocese.

Also onboard with the effort to stop Planned Parenthood is Bishop Emeritus John W. Yanta (retired, Amarillo), who was instrumental in the closure of 19 Planned Parenthood facilities in the Texas Panhandle. Bishop Yanta lives in San Antonio as well, and encourages local pro-life and family leaders in their fight against the abortion giant.

In addition to the good shepherds, a long list of apostolates and church-affiliated groups join STOPppSA and Guadalupe Radio Network GRN 89.7 FM in spreading the word and actively working to stop the opening of the Planned Parenthood abortion mega-center.

Urging San Antonio citizens to make attending the April 1 city council meeting a top priority, Von Dohlen said, “People must decide that in the midst of their busy lives, they are still called to be concerned about those who cannot protect themselves. The time of apathy must cease and become a time for people of good will to act. There will not be another opportunity like this to seek justice, enforce the zoning laws, and delay or even stop Planned Parenthood from opening their doors to sell abortions to pregnant women in crisis situations for the next 30 years.”

“There is no other act of charity that is so crucial and badly needed as for people to speak for life on Wednesday, April 1, at the City Council chambers,” Von Dohlen reiterated. “The lives and health of countless babies and women are at stake. Let’s pack the City Council chambers to make the message loud and clear:  Planned Parenthood is not wanted here.”

To stay up to date on the battle against Planned Parenthood in San Antonio and across the nation, subscribe to the Wednesday STOPP Report.