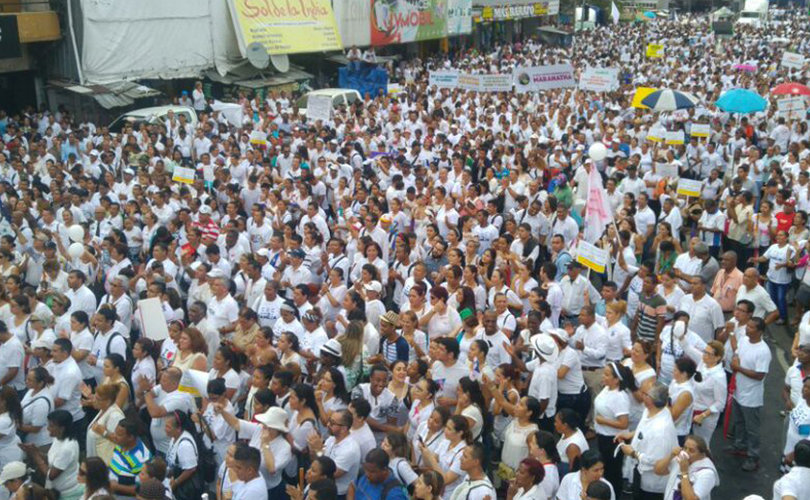 PANAMA CITY, July 29 (C-Fam) – A hundred thousand Panamanians took to their capital city’s streets to oppose a new national bill that would introduce both sexuality education and gender ideology into their schools.

“This law is a colonization attempt. It was written and imposed on Panama by UN Population Fund (UNFPA) and it is not the fruit of our legislature’s will,” Juan Francisco de la Guardia told the Friday Fax. De la Guardia is president of the Panamanian Alliance for Life and Family and one of the march organizers.

Despite the protest, the President of the Panamanian Parliament, Rubén de León Sanchez, said that the law will advance to the health committee and then discussed, once again, by the state’s legislature.

The bill, introduced by deputy of the Democratic Revolutionary Party Crispiano Adames, is modeled after the “Comprehensive Sexuality Education” (CSE) sponsored by UN agencies. The programs, whose biases have already been exposed by several commentators, are based on the recognition of minors’ entitlement to “sexual and reproductive health and rights.”

Whereas the CSE advocates see abortion as a “right,” Panama protects unborn children from abortion in its laws except if the mother’s life is endangered, or if she is the victim of rape or incest.

While the law does not criminalize homosexual intercourse, the code of private international law, approved in 2014, prohibits same-sex marriages in the country, and it explicitly excludes the legality of same-sex marriages performed abroad. Panamanians view these laws as a legitimate expression of their sovereignty and a reflection of the most profound values of its people.

Following the march, de la Guardia made an official statement on behalf of all the organizers, including several prolife and pro-family NGOs, joined by the Catholic Church and by other Christian confessions. Speaking before a commission of deputies, he emphasized parental rights, freedom of religion and belief, and the right to conscientious objection and condemned the bill’s “ideological character.” He urged a return to more effective programs of education, such as the “School for Parents” that the state adopted in the past.

The Panamanian Conference of Bishops also asked the Parliament to reconsider its promotion of the law, saying “We cannot accept experiments that failed in other places.”

Recent studies have shown that the UN model of CSE has indeed proven ineffective where adopted. Opponents have pointed out that it did not alleviate problems it was designed to address, such as teen pregnancies and sexually transmitted diseases. Recent studies have also shown the comparative effectiveness of programs based on abstinence that have often led to good results.

While rejoicing for the success of the march, the parents of Panama are keeping their eyes wide open. Many fear that the ministerial guidelines that accompanied this bill, because of their executive character, may be applied in the country even if the law is not approved.