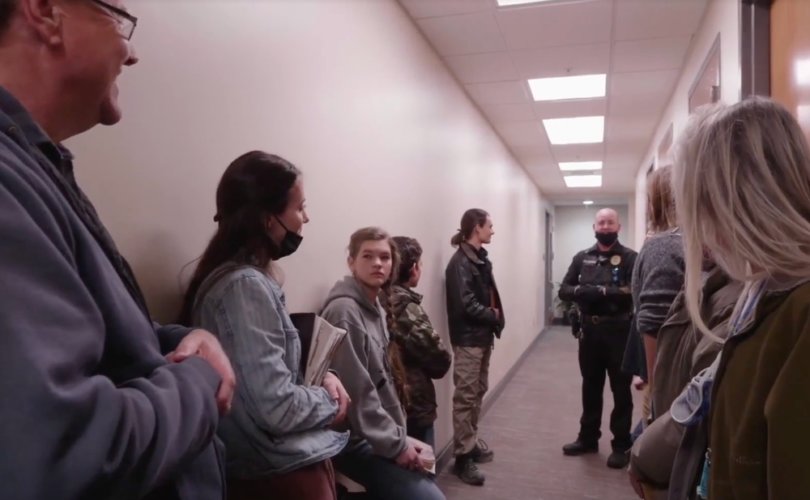 Correction: An earlier version of this article incorrectly stated that the concentration camp that Eva Edl survived was run by Soviets. The camp was actually run by the communist Yugoslav Partisans, who were not part of the Soviet regime. LifeSite apologizes for the error.

NASHVILLE, Tennessee (LifeSiteNews) — Eleven pro-life activists, including 87-year-old concentration camp survivor Eva Edl, were hit with federal charges this week for their involvement in a peaceful 2021 pro-life rescue at a Nashville, Tennessee abortion facility, which has since been forced to stop committing abortions to comply with current state law.

The news comes amid a wave of federal indictments against pro-lifers under the heavily pro-abortion Biden administration, including the dramatic arrest of Catholic pro-life activist Mark Houck by heavily-armed FBI agents last month.

Those charged with conspiracy as well as FACE Act violations are:

The four who have been charged solely with FACE Act violations are:

Eva Edl, who was sent to a communist Yugoslavian death camp as a little girl, has been arrested dozens of times for pro-life “rescues” in which she has worked to save preborn babies from what she calls abortion “death camps.”

The federal indictment contends that the “rescue” advertised by pro-life activists Coleman Boyd and Chester Gallager was actually a “blockade” that violated federal law.

According to the press release, Gallager and his “coconspirators and others blocked the clinic’s entry doors and prevented a patient and an employee from entering.” A Facebook livestream of the rescue also allegedly shows pro-lifers “attempting to engage a patient and her companion as Boyd told his livestream audience that the patient was a ‘mom coming to kill her baby.’”

Video footage along with local reporting at the time indicate the pro-lifers were engaged in peaceful protest.

A recording from the planned protest, made public Wednesday by Live Action, shows pro-lifers peacefully standing and sitting inside a hallway of the building, singing hymns, praying, and refusing to leave. Some of the pro-lifers sat in front of doors in a passive effort to prevent employees and patients from proceeding with abortions. On one occasion, the protesters attempted to engage an apparently abortion-seeking woman in conversation about the preciousness or her preborn baby.

Local news outlet The Wilson Post reported March 5, 2021 that the so-called “blockade” consisted of roughly 22 people, including children, “who entered the facility, sat down and refused to leave.”

— Article continues below Petition —
Stand with Mark Houck, a pro-life Catholic dad of 7 raided by Joe Biden's FBI
Show Petition Text
8425 have signed the petition.
Let's get to 9000!
Thank you for signing this petition!
Add your signature:
Show Petition Text

Mt. Juliet Police Chief James Hambrick told the outlet that pro-life protests outside the abortion facility have not been uncommon, but that the March 5 protest was the first time pro-lifers “actually went inside the building and refused to leave.”

“Our aim was not to arrest. We had good dialogue. We’re just glad everything went as peaceful and orderly as it did,” he said.

Carafem COO Melissa Grant, meanwhile, called the pro-lifers “a group of anti-abortion extremists” who were attempting to “prevent people from obtaining the legal goods and services that they want and need.”

Mt. Juliet Police Capt. Tyler Chandler told The Post that nine people were arrested and removed peacefully from the premises.

The Biden administration’s FBI is investigating the case, which is being prosecuted by the Civil Rights Coordinator of the U.S. Attorney’s Office and trial Attorneys of the Department’s Civil Rights Division, according to the DOJ press release.

Pro-life activist AJ Hurley told Live Action News Wednesday that according to neighbors, Chester Gallager had been out of the state when armed FBI agents arrived at his home.

Other pro-lifers were “called by the FBI telling them they had arrest warrants and had to turn themselves in,” Hurley said.

If convicted, the four pro-life advocates charged with conspiracy could face up to 11 years in prison and as much as $250,000 in fines. Those charged only with “FACE Act violations” face a year in prison and fines of up to $10,000.

Meanwhile, as the pro-lifers face federal charges for seeking to stop the murder of preborn babies through peaceful means, the abortion facility involved in the case has subsequently been forced to stop committing abortions to comply with Tennessee law.

This article has been updated to provide further information. This story is developing.