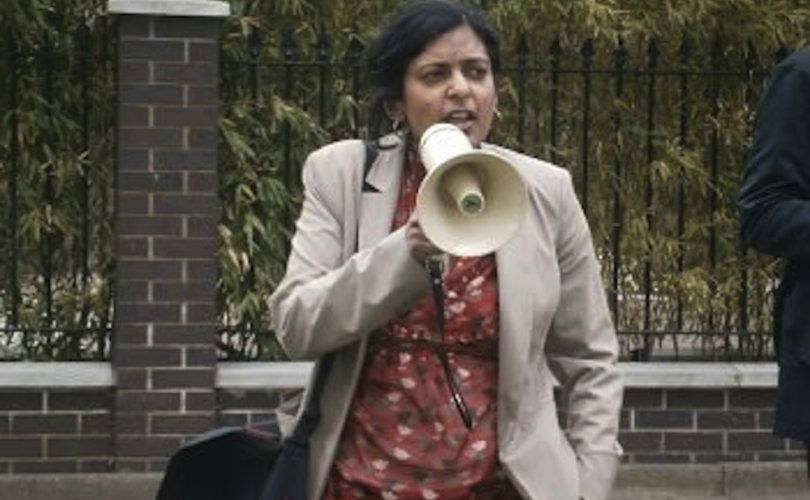 The letter was composed by Rupa Huq, the Ealing MP who has been openly campaigning in Parliament against the quiet pro-life presence outside the Marie Stopes Ealing abortion clinic since January.

Among the signatories of this letter, meant to coincide with the 50th anniversary of the Abortion Act, are Jeremy Corbyn, the far-left leader of the Labour Party, and Vince Cable, who replaced Tim Farron as the leader of the Liberal Democrats. (Farron stepped down after relentless media questioning concerning his Christian beliefs.)

Huq claimed in her letter that women “daily face abuse when undergoing terminations.” She wrote that in her constituency “there have been groups of people stood outside the Ealing clinic for the past 23 years — following women, calling them ‘murderers’ among other things.” Huq stated that in Ealing and in other constituencies “they” stand with “oversized signs of distressing and graphic yet grossly inaccurate images of aborted fetuses, they film women entering and leaving clinics, and they distribute false medical information.”

The MP said “these people” are not “seeking to change the law — they are not campaigning to change the mind of our colleagues or encourage Parliament to review the legislation. Instead, they are targeting individual women who have come to a difficult decision and are seeking to access lawful healthcare.”

Clare McCullough, director of the Good Counsel Network, has repeatedly denied that pro-lifers harass women outside the Marie Stopes Ealing clinic. McCullough told LifeSiteNews in an interview earlier this week that Huq has not provided any evidence for her claims. She also said the “circus” began only with the arrival of pro-abortion activists calling themselves “Sister Supporters” 18 months ago.

Blogger Caroline Farrow, another woman familiar with the Good Counsel Network, has written that the real agents of harassment outside the clinic are the pro-abortion “Sister Supporters”, among whom Huq has been photographed. In a recent blogpost Farrow contrasted the peaceful pro-life presence with the noisy pro-abortion protest and accused the Sister Supporters of harassing church-goers:

“(Sister Supporters) have happily disrupted a peaceful religious procession which departs from Ealing Abbey every Saturday and also attempted to prevent Mass-goers from leaving the building. Their aim is to put as much pressure as possible on the abbey in order that they will then discourage Catholics from participating in any kind of pro-life activity in public. It seems that Sister Supporters aren’t very tolerant when it comes to religious freedom.”

McCullough maintains that Good Counsel Network offers women the counselling — and pro-life options — that the abortion businesses do not provide. Huq, however, sees the pro-life presence as “a way of telling women that the decisions that they make about their bodies and own futures are unacceptable.”

This is why, Huq wrote to the Home Secretary, she and her colleagues are asking the government to introduce “buffer zones” outside abortion clinics and “pregnancy advisory bureaus.”

The letter follows what McCullough told LifeSiteNews was a “two-pronged” approach in eliminating a pro-life presence from outside the Marie Stopes Ealing abortion clinic: the local government’s efforts to remove them by way of a public spaces protection order and Huq’s campaign in Parliament.

Hitherto the public spaces protection order (PSPO), which has replaced the old anti-social behavior order (ASBO), has not been used to restrict freedom of speech. However, critics have called it an unprecedented “blank cheque” of power, allowing a “single council official to ban activities in public spaces within a matter of days, after a brief consultation with the police.” Meant to curb public drunkenness and drug-taking in a given area, PSPOs have also been used by local governments to prevent dogs from fouling or running free, and to prevent such perceived “anti-social” behavior as begging, street peddling, and busking.