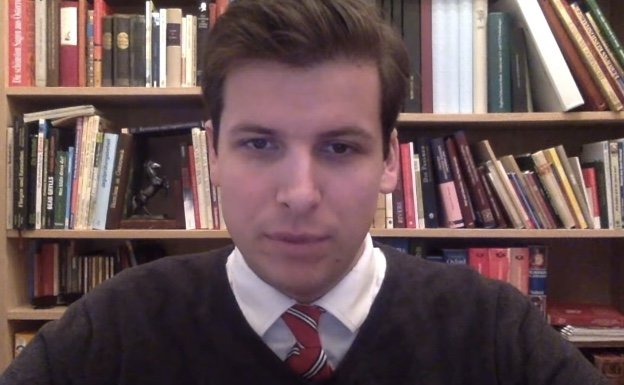 VIENNA, Austria, December 3, 2019 (LifeSiteNews) ― More than 120 people answered a young Catholic hero’s summons to pray outside his nation’s most important cathedral while a sacrilegious pro-LGBT event happened inside.

Alexander Tschugguel, 26, has released a video in which he described the rosary held outside Vienna’s St. Stephen’s Cathedral on the night of Saturday, November 30.

“It was a wonderful evening,” he said. “So many fantastic people were here.”

The Catholic activist, who became famous in October after removing pagan idols from a Catholic church in Rome and throwing them in the Tiber, was filmed by Gloria TV addressing the crowd in German.

The group prayed for those who were attending the pro-LGBT “Believe Together” concert organized in St. Stephen’s Cathedral by the Austrian Knights of Malta and gay rights activist Gery Keszler. Ostensibly to raise funds for HIV/AIDS relief, the event featured Austria’s most famous drag queen Thomas Neuwirth.

Neuwirth, who attracted worldwide attention for his 2014 Eurovision performance as the heavily made-up yet bearded “Conchita Wurst,” now has two personae, Tshugguel explained: Conchita and WURST. The gay icon appeared in his WURST persona for the cathedral concert.

“This artist, Thomas Neuwirth, created this fantasy figure called Conchita Wurst, (who) is nothing else but a drag queen, and a year ago he severed this figure into two parts, so he now goes on stage as Conchita or WURST. Conchita is this drag queen character, and WURST is this man, but gay, character with leather.”

Tschugguel explained that Conchita means “conception” and that Wurst means both “sausage” and “it’s all the same to me” or “I don’t care” in Viennese German.

Neuwirth has performed in the “Stephansdom” on more than one occasion. In 2017, he took part in an LGBT-themed prayer service in the cathedral.

“Believe Together” organizer Gery Kezler, a friend of Vienna’s Cardinal Archbishop Christoph Schönborn, was also the organizer of the city’s AIDS/HIV fundraising “Life Ball.” In his video, Tschugguel  described the annual event as “the biggest homosexual party event in Austria” and named the Clintons and Elton John as some of the “famous guests from all over the world” who attended it.

“The Ball normally (takes) place in June and is part of the bigger celebration of homosexuality which takes place in Vienna, unfortunately, sometimes (for) the whole month of June,” the young Catholic explained.

“There’s a big (LGBT) village built up in front of our City Hall and then the Ball takes place there.”

However, Tschugguel noted that the Life Ball is not scheduled to happen in 2020.

“It seems that there will not be a Ball next year because Mr. Keszler took most of the money, and instead of giving it to the poor people with HIV or AIDS, he put it in his own pocket,” he alleged.

“So I don’t think we will see (Keszler) anymore as the main organizer of the Life Ball again.”

Tschugguel hopes that St. Stephen’s Cathedral will never be used again as a showcase for LGBT activists. He reported that now many members of the Knights of Malta and of the Archdiocese of Vienna are opposed to the cathedral being used in this way.

“Our goal is that this can never happen again,” he said.

Tschugguel believes that because sacrilegious performances have taken place in the cathedral, it should be reconsecrated. He noted, however, that he cannot do this himself. Churches are consecrated by bishops, and Tschugguel, a convert, is a married layman.