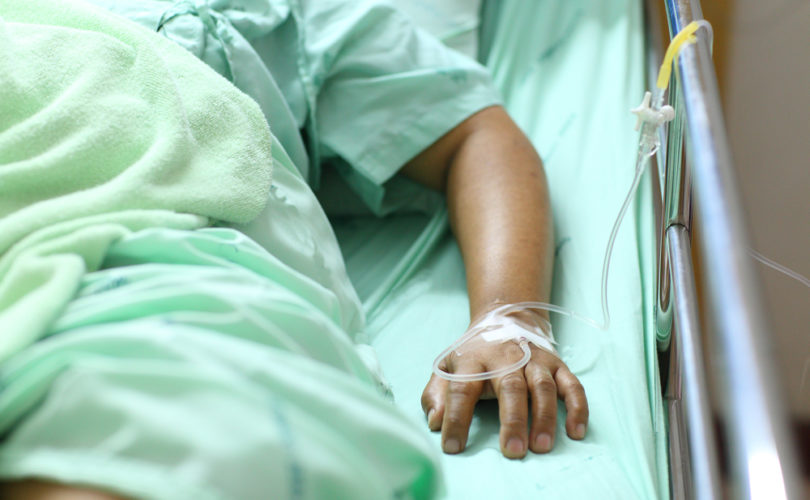 Bird droppings stained the hospital beds. Dust and cobwebs clung to the walls and floor. Meanwhile, poor women waited their turn for the doctor to rush them through a delicate reproductive surgery with rusty instruments and contaminated medicine.

The scene is not a haunted house, or Kermit Gosnell's “house of horrors.” It is a government-run sterilization camp in India, where at least 13 women have died so far due to the government's population reduction measures.

Another 60 women became ill and 20 are in critical condition, according to officials in the state of Chhattisgarh, located in central India.

Poor, sometimes desperate women were promised two-weeks' wages – 1,400 rupees, or $23 U.S. – in exchange for a simple medical procedure that would have them back at work within days. Instead, they were led to the Nemichand Jain cancer center inside the closed private hospital.

One of them was Nem Bai, who was told “nothing would happen, it was a minor operation. They herded them like cattle,” according to Mahesh Suryavanshi, an in-law.

Bai became sick shortly afterwards. “The entire night she was in tremendous pain,” said Ramavtar Suryavanshi, Bai's widower. She was far from the only one to suffer.

Police have arrested Dr. R.K. Gupta, who performed 83 tubal ligations at a sterilization camp in the Bilaspur region on Saturday. A local government official said that “the medicines administered were spurious and also the equipment used was rusted.” Chhattisgarh's Health Minister Amar Agarwal said the problem was that proper “protocol was not followed. At a glance, it appears that there has been negligence on the part of the doctor.”

Gupta reportedly did not disinfect the laparoscope, the camera that guided the surgery, after every patient as required, instead cleaning it after every five to seven surgeries.

Before his arrest, Gupta said the fault lies with a bad batch of the drugs Ciprofloxacin and Brufen, not any personal malfeasance. “But the government will never acknowledge they procured toxic medicines, so they’ll pin the blame on me,” he said.

Dr. Gupta says the procedures took five or six hours; some of his assistants say the doctor completed his work within two hours.

As tragic as the deaths were, they were not the only ones from that weekend. Another tragedy the same day, in the same state, involved Dr. K.K. Sao, whose mass sterilizations killed one woman and injured 17 others.

Experts say debilitating injuries and death are nothing new.

“Sterilization abuses have been committed in India and Bangladesh since at least 1970. The poor had no voice then, and they have no voice now,” Dr. Brian Clowes of Human Life International told LifeSiteNews. “Women are usually the victims, but we hear no cries of protest from those who champion ‘reproductive choice.’”

The Catholic Church of India, however, has responded that the government's population control campaign itself must be ended. Archbishop Prakash Mallavarapu, chairman of the health care commission of the Catholic Bishops Conference of India, said, “It is not enough to punish the guilty responsible for this shocking tragedy. The systemic faults behind this tragedy must be exposed and corrected.”

Financial incentives are used to lure women – almost all the patients are women – into the clinics. The doctors who man the camps receive a reported $1.22 per surgery, one-quarter as much as the officials who recruit women to take part. The government has doubled the payments to women, up to $23 for a tubal ligation or $33 for a vasectomy.

The state also rewards doctors for their fruitfulness in inducing infertility. Dr. Gupta has received government commendations for performing more than 50,000 sterilizations over the course of his 27-year career. Dr. Sao says he has performed 70,000 sterilizations.

There were 4.6 million sterilizations last year alone. According to the Indian government, the percentage of women who have been sterilized is 37 percent and rising, while men having vasectomies make up just one percent of the population, and falling.

“Just two years ago the Guardian reported that the British government was funding dangerous and coercive sterilization campaigns,” Dr. Clowes told LifeSiteNews. “This is one more reason to be concerned with the Gates Foundation and British government’s ‘Family Planning 2020,’ a campaign to bring billions of dollars’ worth of pressure on women in India and around the developing world to stop having children.”

“I am bound by a government order to do as many cases as possible. And if I don’t, then patients may shout or threaten to physically hurt me,” Gupta told local media. “I have no choice.”

“My conscience is clear.”