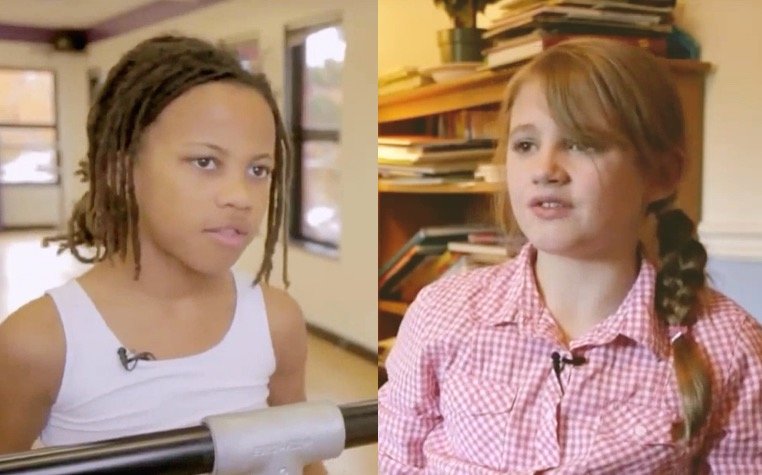 Grade 7 students Tru Wilson and Harriette Cunningham, who are biologically male but identify as girls, were present at the legislature in Victoria yesterday when the bill was introduced and were duly acknowledged by Chandra Herbert.

The Liberal government has said that it will not support the bill, stating that transgender people are “absolutely protected under our human rights code.”

Chandra Herbert later praised the boys to reporters for supporting his bill.

“As you can see, these two young women are incredible. They stood up at an age [when] many others would never say anything. They've stood up because they have to,” he said.

In 2013 Tru Wilson’s parents brought a human rights complaint against the boy’s Catholic school after it refused to allow him to attend class wearing the girls’ uniform and to use the girls’ bathroom.

The pressure caused the Catholic Independent Schools of Vancouver Archdiocese to implement new policy allowing transgendered students to be addressed by their preferred pronoun, to use private bathrooms and change rooms, to dress in school uniform as a member of the opposite sex, and to participate on sports teams of the opposite sex.

In 2012, Harriette Cunningham’s parents and grandmother spearheaded a campaign for a law that would allow their boy to change the sex listed on his birth certificate and passport to “girl” without having surgery. When the law was passed in 2014, Harriette made a media splash by being the youngest person to take advantage of it. He said at that time that his next legal fight would be to have the province end the practice of including sex on birth certificates altogether.

Tru and Harriette took questions from media at a rally outside the legislature in support of the bill.

“This legislation is important because it would really help educate the public on the issue, and I think it would teach them being trans isn't an issue and it's not a deformity,” Harriette said. “People will start to realize lots of people are born with different gender identities.”

Tru said that the legislation would help children who transition from one sex to another at school.

“While I was transitioning I asked if I could have the girl's uniform and they declined, so I fought for Catholic schools to allowed transgender youth, all genders, to choose their chosen uniforms,” he said.

While the boys appear on the outside to be successful examples of individuals who freely chose to change genders at a young age, a Global News 16×9 profile of the pair in 2013 unwittingly reveals a different perspective. In an attempt at a positive portrayal of two young people who were born boys but now freely choose to identify as girls, Global included portions of interviews with the children and with parents and a grandmother which indicate that the boys were pushed to embrace female identities.

At two points in the video Tru lets it slip that it was because of his mom’s word of advice that he should try identifying as a girl that finally made him decide to give it a try.

The boy, speaking about the day he decided to be a girl “full time,” says: “I told her, ‘Mom, I’m really going to trust you now. I want to be a girl, not just a girl a lot of the time and a boy sometimes, but I want to be a full time girl.”

At another point, when speaking about the difficulties of changing schools and losing friends, Tru lets slip again that it was his mom who was the one encouraging him to continue identifying as a girl, even though it was causing the boy unbearable social problems.

“Sometimes I wish that I was just a normal girl so I wouldn’t have to go through all of this. But, my mom always tells me that it’s good to be transgendered because being transgendered makes you special,” he said.

Tru’s mom Michelle Wilson at one point in the video reveals that she told her husband Garfield that if he did not go along with her perception that the boy was gay, then she would walk out on the marriage.

“I’m like, ‘That’s so not fair for Trey [later renamed Tru]. At the time I thought he was gay. I remember I was sitting on the couch and we were arguing again, and I’m like, “Honey, this is a deal breaker, if you can’t love Trey for who he is, no matter what that is, this is not going to work [between us],” the mom said.

The video also unwittingly reveals in Harriette’s case a story similar to Tru’s, but this time it is the boy’s grandma who pushed him in the direction of rejecting his maleness and embracing instead a female identity.

At one point, the boy states: “My grandma told me, ‘Do you want to get a beard like Daddy? I said, ‘No.’ At the thought of that I put my foot down [and said] I want to be fully a girl.”

A little later on in the video, the boy dressed as a girl is seen sitting upon his grandma’s lap. She is reading to him transgender literature and can be heard mentioning “different ideas of gender.”

It is also stated in the video that it was the boy’s grandmother who initially began the campaign on the boy’s behalf to have gender removed entirely from provincial birth certificates and passports.

“I will continue writing to government and advocating for change until we have things in place where she feels safe and protected wherever she goes,” the grandmother states.

While the grandmother likely has nothing but good intentions in helping her grandson to be accepted as a girl, leading psychiatrist Paul McHugh, former psychiatrist-in-chief at Johns Hopkins Hospital, has raised concerns about the effectiveness of transitioning to the opposite sex as a solution for those struggling with identifying with their biological sex.

“In fact, gender dysphoria—the official psychiatric term for feeling oneself to be of the opposite sex—belongs in the family of similarly disordered assumptions about the body, such as anorexia nervosa and body dysmorphic disorder,” he wrote in an article that appeared in The Public Discourse last year.

“Its treatment should not be directed at the body as with surgery and hormones any more than one treats obesity-fearing anorexic patients with liposuction. The treatment should strive to correct the false, problematic nature of the assumption and to resolve the psychosocial conflicts provoking it. With youngsters, this is best done in family therapy,” he wrote.