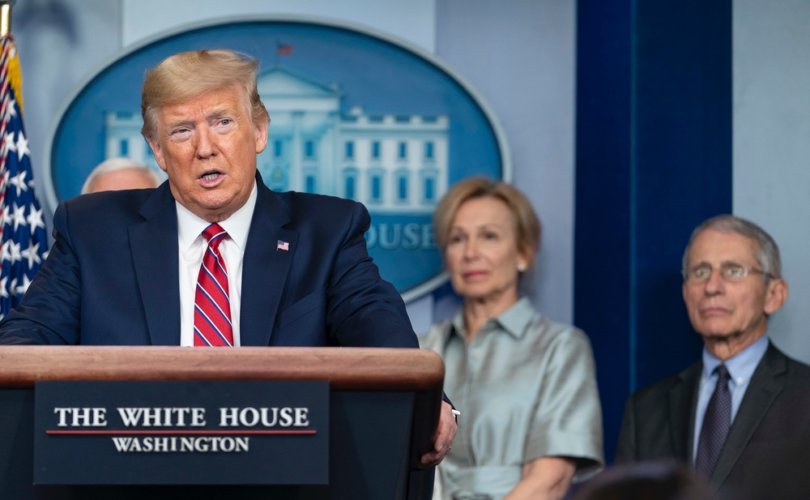 The pro-life representatives, including House Minority Leader Kevin McCarthy, thanked Trump in an April 14 letter for his “decisive actions to protect human life and human dignity on every front,” praising him for having brought “great hope to our nation.”

In the wake of the coronavirus outbreak in the United States, it has been argued by some that Trump’s ban on aborted fetal tissue research by government scientists is thwarting efforts to find a remedy for the disease.

“A senior scientist at a government biomedical research laboratory has been thwarted in his efforts to conduct experiments on possible treatments for the new coronavirus because of the Trump administration’s restrictions on research with human fetal tissue,” the Washington Post claimed in March.

Several of the leading COVID-19 vaccine developments, however, are using aborted fetal cells.

15 state Attorneys General had written to President Trump on March 26, stating that the use of aborted fetal tissue could help “accelerate vaccine development to combat COVID-19,” as well as “study the impact to pregnant women and children.”

“We ask you to end your Fetal Tissue Ban to allow our top scientists the ability to solve this global health crisis,” the Attorneys General concluded.

The signers of the April 14 letter stressed that fetal tissue “from ongoing abortions … has never been used in production of a single vaccine.” Instead, “a few old cell lines” from abortions performed in the 1960s and 1970s are used “for a small handful of vaccines.”

Also, “the few attempted transplants of aborted fetal tissue have resulted in making most patients worse, not better,” they added.

The members of Congress showed that scientific progress and ethical behavior can go hand in hand.

“The focus of the current appeals for taxpayer money to buy fetal tissue is the supposed necessity of using aborted baby body parts to construct humanized mice to test drugs. Yet, this antiquated technology has been surpassed by a plethora of modern, ethical techniques, as has been thoroughly described and cited in Congressional testimony.”

Accusing the proponents of aborted fetal tissue research of exploiting the current situation for their own benefit, the pro-life representatives said that “holding the line ethically gives us the ability to put resources toward better, more promising science that is already showing potential” against COVID-19.

First, they pointed to “humanized” mice that already exist, but are not based on aborted fetal tissue.

Finally, they emphasized the “great potential” of adult stem cells, “derived without destroying embryos and without abortion.” One specific type of human adult stem cell, they said, “has been shown to generate new lung tissue and heal damaged lungs, essential for repair of lungs damaged by respiratory viruses.” Another was successful in improving the health of people suffering from pneumonia induced by the coronavirus.

“During this crisis, the last thing anyone should do is try and advance the left’s radical abortion agenda,” Lamborn said. “Life is precious at all stages and any claim to the contrary is unconscionable.”

He is convinced that a cure for COVID-19 will be found, “but using tissue from aborted babies to do so is unethical and wrong. I’m thankful that President Trump has taken such a strong stand for life, and I’m confident a solution can be found while also maintaining the sanctity of life.”

Marjorie Dannenfelser, president of pro-life Susan B. Anthony List, praised the letter in a statement on Wednesday.

“As millions of Americans work together to fight the coronavirus outbreak, the profit-driven abortion industry and their allies exploit fears surrounding the pandemic to promote an extreme abortion agenda,” she noted.

Abortion supporters “insist that unethical experiments involving aborted baby body parts are necessary to find a cure for the coronavirus, ignoring the wide variety of ethical options already available and under development,” she continued.

“We are greatly encouraged by the strong leadership of Sen. Wicker, Sen. Cindy Hyde-Smith, Rep. Lamborn, Rep. Latta, and all our pro-life allies in Congress who are fighting back against the abortion industry’s attempts to exploit this national pandemic to advance their dangerous agenda.”