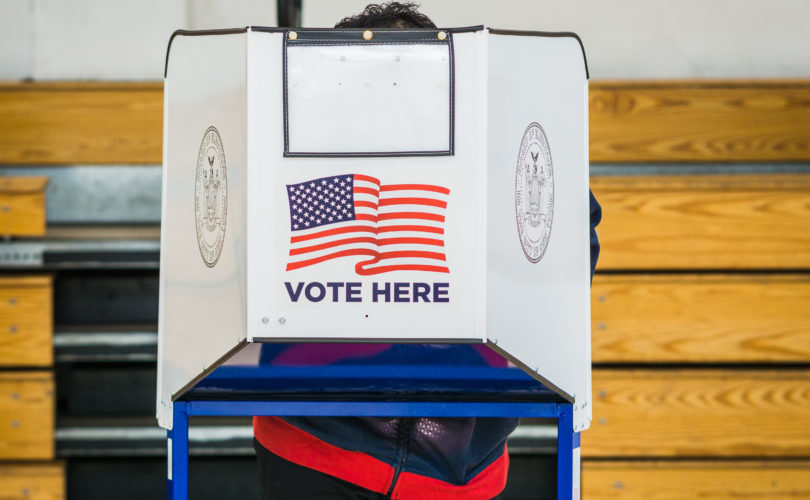 NEW YORK, July 1, 2021 (LifeSiteNews) — The New York City Board of Elections (BOE) confirmed that it failed to clear around 135,000 “test” votes from its voting machines before the New York Democrat mayoral primary election Tuesday, resulting in incorrect results that it later rescinded. The correct results have not yet been officially established.

“Yesterday's ranked choice voting reporting error was unacceptable,” the officials continued, adding that they “apologize to the voters and to the campaigns for the confusion” and promise an accurate recount.

A recently released unofficial count shows Brooklyn borough president Eric Adams still in the lead with 31.8 percent of the vote, and former counsel to Mayor Bill de Blasio Maya Wiley and former sanitation commissioner Kathryn Garcia are neck-and-neck with 22.2 percent and 19.3 percent, respectively. Another 124,000 absentee ballots have not yet been counted.

Before the elimination of the 135,000 fake votes, Garcia was within 2.2 points of Adams in the tight race. The candidates have each expressed concern about the error.

Adams called the situation “unfortunate” and expressed appreciation of the BOE’s “transparency and acknowledgement of their error.” Garcia said the miscalculation is “deeply troubling.”

Wiley went further, saying the failure to properly count the votes was “the result of generations of failures that have gone unaddressed.”

In a statement released Tuesday, Wiley said the New York BOE “mishandled tens of thousands of mail in ballots during the June 2020 primary,” adding that the board “has also been prone to complaints of patronage.”

“Today, we have once again seen the mismanagement that has resulted in a lack of confidence in results,” Wiley added, “because those who implement (election laws) have failed too many times.”

De Blasio also released a statement, excoriating the BOE for the miscount.

“Yet again, the fundamental structural flaws of the Board of Elections are on display,” de Blasio said, calling for an “immediate, complete recanvass of the BOE’s vote count and a clear explanation of what went wrong.”

The “error” in the New York mayoral primary is reminiscent of a similar situation in a Michigan county during the 2020 presidential election.

Joe Biden was announced the winner of Michigan’s Antrim County until it was discovered that around 6,000 votes had been erroneously switched from Trump to Biden. When the votes were accurately recounted, Trump was declared the winner.

Michigan Secretary of State Jocelyn Benson admitted that Antrim County “initially released incorrect unofficial election results” but said the errors “were quickly caught and corrected and determined to have been caused by human error.”

As with Antrim County, New York Common Cause executive director Susan Lerner claimed that the gross miscalculation of New York’s mayoral results was caused by human error, in this case committed by a “low-level junior staffer.”

Former President Donald Trump quickly drew the connection between New York’s mayoral race and the 2020 election, suggesting that the true winner of the New York primary will never be known.

“Just like in the 2020 Presidential Election, it was announced overnight in New York City that vast irregularities and mistakes were made,” Trump wrote in an email message. “The fact is, based on what has happened, nobody will ever know who really won.”

“Watch the mess you are about to see in New York City, it will go on forever,” Trump wrote. “They should close the books and do it all over again, the old-fashioned way.”

In the context of the presidential election, New York’s “mistake” involving 135,000 votes is not insignificant.

Laurence Tribe, professor emeritus at Harvard University and co-founder of the American Constitution Society, called for the abolition of the Electoral College after observing that Trump only narrowly lost the 2020 election by just under 43,000 votes spread across three states.

Before the 2020 election Trump had predicted fraud and uncertainty, telling reporters, “You can’t take millions of ballots, send them haphazardly all over the country, or all over a state, and expect it to come out properly.”

“It’ll end up being a rigged election or they will never come out with an outcome,” he said. “They’ll have to do it again, and nobody wants that.”

In spite of errors, glitches, and miscounts in large and small elections, including the New York mayoral primary, media outlets and politicians have repeatedly declared that questioning the results of the last presidential election amounts to a threat to American democracy.

In a joint statement issued in November 2020, election infrastructure officials declared the 2020 presidential election the “most secure in American history.”