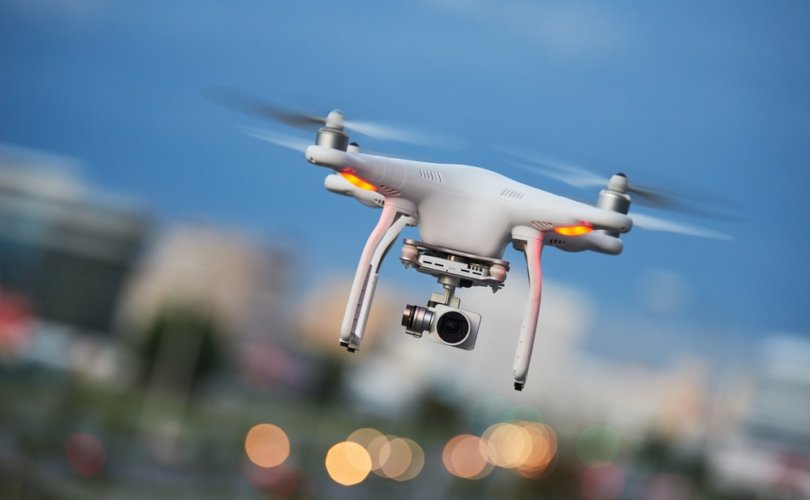 WASHINGTON, D.C., May 14, 2020 (LifeSiteNews) — Fourteen members of Congress have begun to investigate U.S. governmental use of Chinese drones, asking both the Department of Justice and the Department of Homeland Security for “information about state and local law enforcement use” of drones produced by Chinese company Da Jiang Innovations (DJI).

Led by Congressman Matt Gaetz from Florida and Congressman Jim Jordan from Ohio, who is also the ranking member of the House Committee on the Judiciary, pointed out that DJI has almost an 80-percent share of consumer drone sales in the United States.

Recently, amid the coronavirus pandemic, “DJI has donated drones to state and local law enforcement entities in the United States to purportedly assist with social distancing enforcement.”

In fact, drones are already being used within the United States to monitor people’s compliance with restrictions implemented after the COVID-19 outbreak.

“Cities like Elizabeth, New Jersey, are already deploying drones with automated voice messages reminding people to keep their distance. In Meriden, Connecticut, the mayor announced they’ll be using them to monitor the city's trails and parks,” reported WABC.

Newer drones, the article revealed, “will be equipped not only with cameras, but high tech sensors that can help determine if people are sick or not social distancing down below.”

CBS News quoted Sergeant Tim Ehrenkaufer of the Daytona Beach Police Department in Florida, which had received DJI drones, trying to downplay the significance. “We’re not telling people to get out,” he said, “We’re not enforcing as far as having them go. We’re just making the announcement for public safety reasons.”

They explained that in 2017, “Homeland Security Investigations (HSI) — the investigative component of U.S. Immigration and Customs Enforcement — issued an alert warning that DJI drones are “[l]ikely providing U.S. critical infrastructure and law enforcement data to [the] Chinese government.’”

“That alert ‘assesse[d] with high confidence [that DJI] is selectively targeting government and privately owned entities within [infrastructure and law enforcement sectors] to expand its ability to collect and exploit sensitive U.S. data,’” they continued. “In May 2019, the Cybersecurity and Infrastructure Security Agency (CISA) within the Department of Homeland Security issued a similar warning that Chinese-made drones pose a ‘potential risk of an organization’s information.’”

This year’s National Defense Authorization Act banned the purchase of Chinese-made drones across all military branches.

The group of members of Congress requested from the Department of Justice a list “of all state, local, territorial, and tribal law enforcement agencies receiving federal grant funding to purchase or operate DJI drones covering the period from January 1, 2017, to the present.”

They also asked about any concerns the department might have concerning DJI drones, and whether or not it was monitoring the current donation of drones by the Chinese company.

Similarly, the Department of Homeland Security was asked a number of questions, including whether there have been “any new alerts since CISA’s May 20, 2019,warning that Chinese-made drones present a “potential risk of an organization’s information.”

President Donald Trump has been particularly tough on China, essentially banning technology company Huawei from doing business in the United States. “You look at what [Huawei has] done from a security standpoint, a military standpoint. Very dangerous,” Trump said at the time.

China is also known to spy on American companies and steal trade secrets. Since 2012, more than 80 percent of economic espionage cases brought to the attention of the Department of Justice have implicated China, according to CNBC.

“China has a history of infecting the world, and they have a history of running substandard laboratories,” he continued. “These are not the first times that we’ve had a world exposed to viruses as a result of failures in a Chinese lab. And so, while the intelligence community continues to do its work, they should continue to do that, and verify, so that we are certain.”