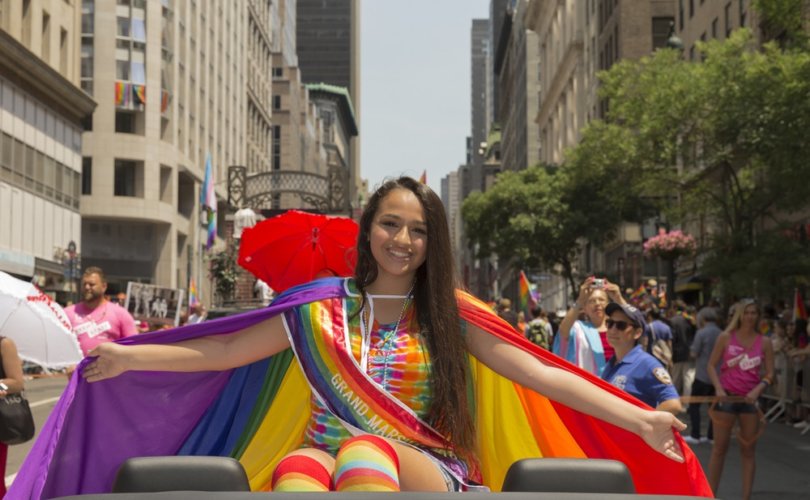 June 8, 2018 (LifeSiteNews) – Jazz Jennings, the 17-year-old who has lived most of his life as a “girl” in media limelight, is scheduled to have his male genitals removed and replaced with a “vagina” made partially from his stomach tissue.

The surgery will be on June 26, he announced. June 26 is the anniversary of Obergefell v. Hodges, the Supreme Court decision that imposed same-sex “marriage” on the U.S. in 2015.

Jennings is the star of the TLC reality show I am Jazz, which has documented his life as a transgender “girl.” The children’s book I am Jazz, inspired and co-authored by Jennings, is used to introduce young children to transgenderism.

The surgery on Jennings’ genitalia is experimental. The stomach tissue will help create more “depth” in his “new” genitalia, he explained. Hormone blockers have prevented his body from developing properly, causing permanent damage, so there is much less genital “tissue” with which doctors have to work.

“Because I started the [puberty] blockers so early, I never went through puberty,” he explained in a YouTube video about the upcoming surgery. “That’s why I’ve been able to be so feminine. But because of that, it caused me to be so suppressed that I didn’t have growth in that region.”

These facts were highlighted in an August 2017 TLC episode during which Jennings traveled with his parents to Philadelphia for a consultation about a “sex-change” surgery.

“I haven’t experienced any sexual sensation…I don’t even know what she’s talking about,” Jennings said after the surgeon talked to him and his parents about that topic. “It is possible that hormone suppression has affected my libido. I don’t have the same signals coming from my genitalia to my brain and I don’t have those hormones driving me on.”

In that episode, the doctor warned, “post-op depression is very common” but claimed it “doesn’t mean you’re having regret.”

The many people who have undergone “sex reassignment” surgery and regretted it would likely disagree. Their many stories are documented at sexchangeregret.com.

Some of these stories are also told in the documentary TranZformed: Finding Peace with Your God-Given Gender, in which former transgenders who regretted “transitioning” and ultimately accepted their biological sex tell their stories.