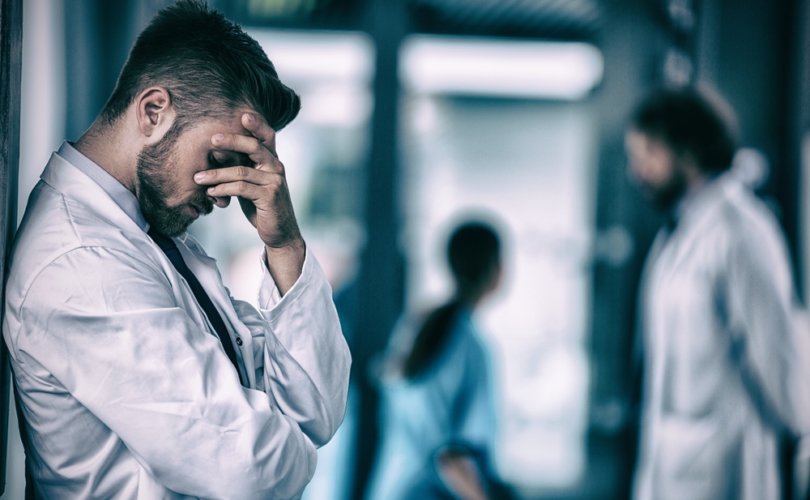 WINDSOR, Ontario (LifeSiteNews) – The jobs of over 170 Ontario healthcare workers are at risk because they have not taken the experimental COVID-19 injections.

On Wednesday, the public learned that 172 employees at two hospitals in the Canada-USA border city of Windsor, Hôtel-Dieu Grace Healthcare (HDGH) and Windsor Regional Hospital (WRH), are currently suspended without pay  for their refusal to be jabbed with vaccines that have yet to finish clinical trials.

The hospitals’ policies have stipulated that the employees have until October 6, or October 7, respectively, to show proof they have been “vaccinated” or they face “termination with cause.”

“We’ll be able to cope without them, I hope,” he added.

Musyj, a lawyer by trade, told the media via video conference that unvaccinated people pose a particular risk when it comes to spreading COVID-19 to patients.

Currently, there has yet to be any evidence produced in clinical trials that proves vaccinated individuals cannot spread COVID, or that unvaccinated people pose more of a risk when it comes to transmitting the virus compared to vaccinated people.

In fact, Health Canada explicitly states, “Your vaccination status only changes your risk of catching COVID-19 and becoming ill. It doesn’t change your risk of exposure to the virus out in the community.”

Further, in Ontario, which has a vaccine passport system in place, people are still being required by public health officials to wear a mask even in places that require proof-of-vaccination for entry.

This means that if a person enters a restaurant that requires them to show proof-of-vaccination, ensuring that everyone in the establishment is double-jabbed, they will still need to wear a face-covering.

“The Delta variant is the dominant strain in Ontario, and it continues to pose a threat to public health,” he added.

According to the Canadian Broadcasting Corporation, 84 of the 172 staff members that have yet to be vaccinated are considered “clinical staff.” Doctors, nurses, physician assistants, technicians, and therapists, among others, are included under the “clinical staff” designation.

When asked why some hospital staff members are hesitant to receive the jab despite working on the frontlines during the pandemic, WRH’s Chief of Staff Dr. Wassim Saad told the media that there are a “variety of reasons” behind the skepticism.

“I’ve spoken to at least a dozen [employees who do not want to take the inoculations] by now, and a lot of their questions were legitimate questions,” Saad said.

According to Saad the “legitimate questions” surrounded the safety and efficacy of the vaccines in certain situations: while pregnant, while already having an autoimmune disease, and while having a history of adverse effects related to vaccinations.

In a previous statement on September 13, WRH’s Musyj admitted that there is a “very vocal” group in his hospital against the mandatory coercion policy, with some of the staff opposed to the vaccine being doctors and nurses.

When asked if some of the people fielding these opinions are medical professionals, Musyj exclaimed “Oh, of course!” He revealed further that some of the vaccine objectors include “physicians.”

The suspension of the 172 Windsor health workers happened only days after the September 15 statement by the British Columbia Nurses Union (BCNU) questioning their own vaccination mandate.

“In response to the government’s announcement on September 13 of its plans to extend the mandatory vaccination order to all health-care workers, yesterday BCNU expressed its support for vaccination while raising concerns that consequences to this order could contribute to the severe nurse shortage in this province,” the statement reads.

“There is potential for a significant number of health-care workers to be removed from an already depleted workforce. Taking nurses away from the bedside will have serious impacts on patient care,” they added.

Citing the reasons for not getting the jab, nurses in British Columbia mentioned concerns about the safety of the vaccine, especially during pregnancy and while breastfeeding.

According to BCNU vice president Aman Grewal, the 20 percent of nurses that remain unvaccinated have informed the union that “they have read the science, but they are not satisfied with the science that is out.”

Dr. Michael Yeadon, a former Pfizer vice president with degrees in biochemistry and toxicology and a doctorate in respiratory pharmacology, told LifeSite that women of childbearing age, especially pregnant and nursing women, should entirely reject the COVID-19 inoculations.

“You never, ever give inadequately tested medicines, medicinal products, to a pregnant woman,” he stated.

“And that is exactly what is happening. Our government is urging pregnant women, and women of childbearing age, to get vaccinated. And they’re telling them they’re safe. And that’s a lie because those studies have simply not been done.”

Having reviewed studies in both rats and pregnant women, Yeadon has concluded that it is very likely that vaccines pose a threat to a women’s fertility.

“So, now we have a second problem, that the vaccine, at least in a rat, distributes into the ovaries,” he said.

“And I will tell you, a general rule of thumb in toxicology is if you don’t have any data to contradict what you’ve learned, that’s the assumption you make for humans,” Yeadon continued.

“It is very worrying. So, we don’t know what that will do, but it cannot be benign, and it could be seriously harmful because the vaccines will then express the coronavirus spike protein, and we know that there are unwanted [results] from that spike protein.”

Referencing the recent small-scale experiment done on pregnant women, Dr. Yeadon continued to explain his opposition to the vaccination for this cohort.

“So, I’m sorry to say this, but that is a vaccine-induced autoimmune attack on their own placenta, “ he added.

“And I think you can only expect that that is happening in every woman of childbearing potential. It’s generating antibodies against this critical protein required for fertilization and successful pregnancy.”

LifeSiteNews has reached out to Windsor Regional Hospital for comment but has not yet received a reply.

1
REPLAY: LifeSite’s 25th Anniversary Gala
2
World Economic Forum adviser Yuval Harari is a Marxist who believes there is no truth, only power
3
Some medical professionals are claiming pro-life laws stop them from prescribing pain-killers. They don’t
4
Dr. Robert Malone: Endless mRNA jabs are in the works as the CDC and FDA play ‘hide the data’
5
European data show excess deaths among the young and in highly jabbed regions
Subscribe to Daily Headlines »