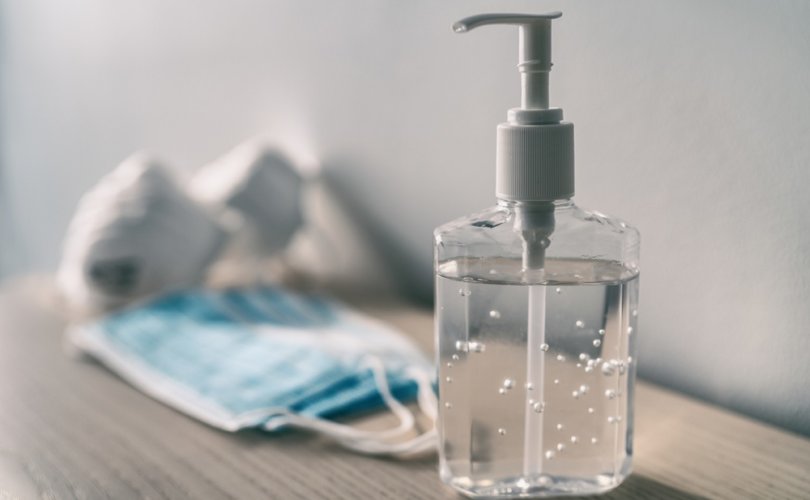 (LifeSiteNews) — Poison control centers have received thousands of reports about children’s exposure to hazardous chemicals in hand sanitizers after the implementation of Covid-19 protocols, and Health Canada’s latest recall of 19 tainted hand sanitizers with “potential serious health risks” adds to a growing list of underappreciated disinfectant dangers, especially for children.

The 19 hand sanitizer products withdrawn from the Canadian market by Health Canada in October include five sold through the nationwide Dollarama chain that specializes in discount products, many of them from China. They contribute to Health Canada’s list of 194 disinfectant hand rubs recalled since last June because they contain methanol, cancer-causing acetaldehyde, and other unauthorized chemicals linked to blindness, brain damage, cancer, fetal injury, or drug-resistant bacteria.

“If swallowed, methanol can cause severe adverse reactions, including death,” according to the agency press release.  “Frequent exposure to hand sanitizers containing elevated levels of methanol may cause skin irritation, eye irritation, breathing problems, and headaches.”

The U.S. Food and Drug Administration first alerted the public to a problem with the Mexican imported hand sanitizer Eskbiochem in June 2020. Since then, more than half of the hand sanitizers from Mexico have been found to contain methanol. The FDA lists 260 recalled contaminated hand sanitizers, and the list continues to grow.

“Substantial methanol exposure can result in nausea, vomiting, headache, blurred vision, permanent blindness, seizures, coma, permanent damage to the nervous system or death,” according to the FDA. “Although all persons using these products on their hands are at risk for methanol poisoning, young children who accidentally ingest these products and adolescents and adults who drink these products as an alcohol (ethanol) substitute, are most at risk.”

Not surprisingly, reported methanol deaths by hand sanitizer and methanol poisoning among children have increased globally during the pandemic. In August, the Centers for Disease Control and Prevention reported on the first 15 cases of toxic poisoning from hand sanitizer ingestion, mostly among alcoholic adults, seen in Arizona and New Mexico.

During the first nine months of 2021 in the United States, 18,168 hand sanitizer exposures in children under 12 years old were reported to the National Poison Data System of the American Association of Poison Control Centers, at a rate of about 2,000 incidents per month.

Health Canada told LifeSiteNews that it is looking for data on childhood hand sanitizer reports. The agency may not gather centralized data on the problem, however.

University of Saskatchewan researchers warned in a 2020 paper that Health Canada relaxed its regulations for hand sanitizer ingredients to meet soaring demand for the products during the Covid-19 scare, and that the agency’s current “reactive” policy is to withdraw after danger is detected.As a result, hand sanitizers sold in Canada and the United States have been found to contain multiple toxins besides methanol, including:

Counterfeit products may contain any number of unlabeled toxic ingredients, according to Health Canada. But even “safe” public health approved sanitizers contain hundreds of different chemical ingredients, from fruity and flowery scents with allergic potential, to known hazardous chemicals including triclosan, a potent hormone disruptor that has wreaked havoc as a leading contaminant of U.S. rivers and lakes and that contributes to antibiotic resistance.

A team of researchers at Virginia Tech University reported as far back as 2005 that when triclosan in toiletry products reacts with chlorinated tap water or degrades under sunlight, it produces chloroform, which is toxic and cancerous if inhaled or absorbed through the skin, especially while bathing in warm water.

Standard hand sanitizers can seriously damage eyes as well, and chemical eye injuries in children from them have soared since Covid protocols began. A consortium of French researchers reported that between April and August 2020, there were seven times more pediatric cases of alcohol-based hand gel eye exposures than in the same period in 2019, for example. The researchers describe the hospital admissions of 10 boys of an average age of 3.5 years, eight of them with eye ulcers from hand gels. Two of the children required transplants of amniotic membrane derived from placentas into their eyes to help them heal.

Israeli researchers reported on nine children at a single emergency department who were suffering from hand-sanitizer chemical eye injuries as well; six were treated and discharged, but three children required hospitalization between four and 11 days.

“These products should be regarded as potentially toxic and stored out of the reach of young children,” the French researchers concluded.

Hand gels have become a staple in public venues under Covid protocols, however, with apparently little public awareness of their serious dangers. Dispensers are a standard feature in school entrances and classrooms where even small children are forced to pump chemical goo on their hands before entering, and frequently throughout the day. Holy water fonts have been replaced by sanitizer dispensers at church doors and some priests now sanitize repeatedly on the altar as though it is a sacred part of the liturgy. The chemicals are ubiquitous in shops and restaurants and many children are now trained to douse themselves automatically.

It’s not just children who suffer side effects from frequent application of chemical disinfectants, however. Hand sanitizer dermatitis has been described by dermatologists as a “problem.” One 2020 study of their use by German healthcare workers found that 90.4% of hospital staff suffered from “acute hand dermatitis” and 14.9% had hand eczema as a result of “a significant increase in hand washing, disinfection, and use of hand cream … regardless of having direct contact with COVID-19 patients.”

Hand sanitizers are a little-known fire hazard, too. Kate Wise, a mother of three from Austin, Texas, learned this when she slathered on hand gel and then lit a candle. She suffered second and third degree burns to her face after the alcohol vapors ignited.

“The explosion happened in a matter of two seconds with my entire body on fire,” Wise told ABC News. “And I heard my daughters screaming ‘mom’s on fire, mom’s on fire.'”

Perhaps one of the most underappreciated problems of the widespread use of alcohol-based antiviral hand rubs is more subtle, but more significant in the long run: their potential role in the creation of drug-resistant superbugs. “Before COVID‐19, there were significant concerns among the health‐care community regarding indiscriminate use of over‐the‐counter hand disinfectant products which may lead to the selection of bacteria with enhanced antibiotic resistance,” says a paper published in June by University of Saskatchewan researchers in the journal World Medical Health Policy.

“Our hands are natural habitats for a wide range of organisms. If we kill the organisms on our hands with sanitizer (hand sanitizers are very effective at killing all bacteria present), new organisms will move in and occupy the newly vacant habitat,” Martin Reaney, co-author of the study from the University of Saskatchewan, told LifeSiteNews. “This is not necessarily a problem, but some of the new tenants on our hands might not be the best for us.”

The CDC states that, “There is no chance for the germs to adapt or develop resistance,” but that’s not what the science says. Research has found that alcohol-based hand sanitizers used in hospitals do foster drug-resistant superbugs. One Australian study looked specifically at the Enterococcus faecium bacteria – a leading cause of infections in hospital. When the researchers tested 139 samples of E. faecium taken from patients, they found the bugs collected after hand sanitizers were put into routine use in hospitals were as high as 10 times more resistant to an alcohol disinfectant solution.

Some of these bacteria were applied to mice cages but survived on the surfaces even after they were cleaned with hospital-strength alcohol wipes, and made their way into the poop of the mice living in the cages, illustrating the problem was not just theoretical. The resistant strains were making it into the living animals with unknown effects.

As the Saskatchewan scientists concluded: “Fears of contracting COVID‐19 is driving the trend of overuse, raising concerns that long‐term, daily use of these products may outweigh their benefits.”

Stricter regulation of hand sanitizer products and their use may at last be on the horizon, but the laxness of product oversight may surprise some consumers. The FDA, which loosened its regulations to allow for a rush of hand products onto the market as did Health Canada, announced this month that it would be reinstating previous, more stringent guidelines. The agency said distributors have until March 2022 to unload products licensed under the slack Covid guidelines.