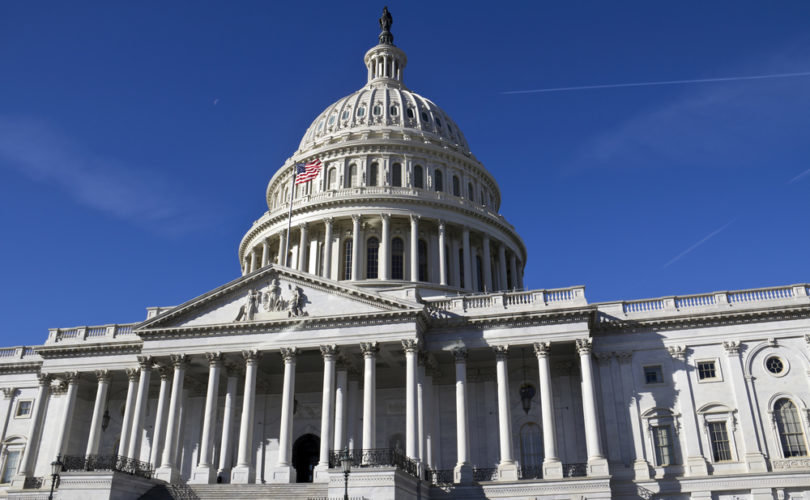 More than a third of U.S. Congress has filed a “friend of the court” brief to the U.S. Supreme Court (SCOTUS) arguing against President Biden’s administration’s attempt to force COVID-19 vaccine mandates through the use of Occupational Health and Safety Administration (OSHA) regulations.

“[OSHA] was never meant to be the health police,” they wrote. “Moreover, mandatory vaccinations do not stop individuals from contracting and transmitting COVID-19. Vaccinated workers can still contract and transmit COVID-19, including the new Omicron variant. Given that fact, imposing masking and testing restrictions only on unvaccinated workers makes no sense because all workers regardless of vaccination status remain potential carriers and transmitters of the virus.”

The White House seeks to use OSHA’s regulatory authority to force private businesses that have more than 100 employees to require employee COVID vaccinations or weekly testing. The brief supports the National Federation of Independent Business and the State of Ohio, the plaintiffs in the case fighting against Biden’s mandates.

Arguments against OSHA’s vaccine mandate are scheduled for hearing at SCOTUS on January 7. Additionally, the high court will hear a second series of arguments that day over Biden’s effort to mandate the experimental COVID vaccines for Medicaid/Medicare-funded facilities’ healthcare workers.

“Congressional members have an interest in the powers they delegate to agencies not being abused,” the congressmen said in the brief. “The legislative authority vested in the federal government belongs to Congress, not the Executive branch. In this case, the promulgation by the Occupational Health and Safety Administration (OSHA) of a sweeping, nationwide vaccine mandate on businesses intrudes into an area of legislative concern far beyond the authority of the agency.”

The congressmen outline how the Biden administration has exploited OSHA’s rarely used “emergency temporary standard” (ETS) provision to create the guise of legality for OSHA to issue a vaccine mandate. The brief contends that no such authority in OSHA has ever existed or been delegated — explicitly or implicitly — by Congress.

The congressmen highlight how OSHA has never previously attempted to use its powers to mandate vaccination, further supporting the idea that the OSHA mandate is a clear over-reach and misinterpretation of the agency’s purview. “In short, there is no mouse hole in which Congress could have even tried to hide the elephant of the ETS mandate here,” they wrote.

There are serious reasons to doubt the vaccine’s safety and efficacy. The congressmen maintain that, even if those concerns did not exist, the authority to issue a vaccine mandate has traditionally rested with the states. “Without clear congressional authority in the regulatory scheme for such an expansion of agency authority into the realm of state police powers, it may not be assumed to exist,” they said.

“Moreover, the sudden ‘discovery’ of authority under the OSHA Act confirms that it was never intended to displace state authority in this area,” they concluded.