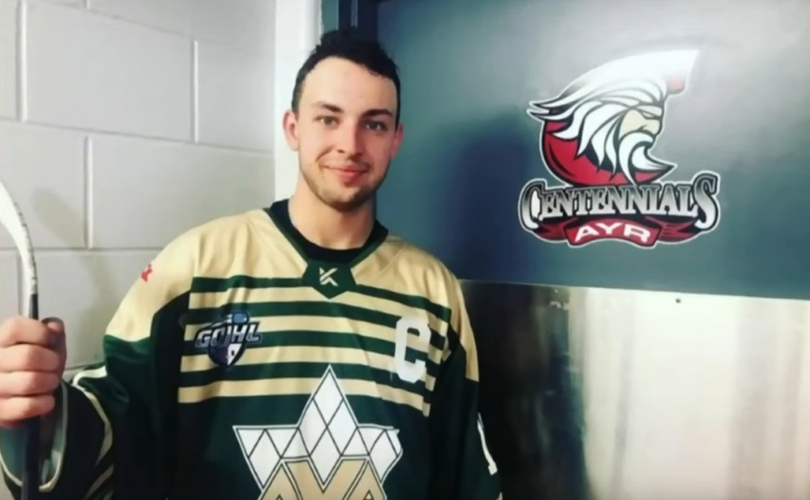 AYR, Ontario (LifeSiteNews) — Another tragic death occurred in Canada on Tuesday when a 19-year-old hockey captain collapsed and passed away mid-game, sparking many online to question whether the league’s vaccine mandate played a role.

According to the Canadian Broadcasting Corporation, 19-year-old Eli Palfreyman, captain of the Ayr Centennials of the Greater Ontario Junior Hockey League, passed away suddenly during an intermission of a preseason game on Tuesday.

Centennials vice president Brian Shantz responded to the tragedy by relaying that the team is “devastated,” and asked “for your prayers and support for Eli’s family and each of our players.”

According to an account of the young player’s death, it was during the intermission between the second and third period of the game when Palfreyman collapsed in the locker room, prompting those around him to jump in and give immediate medical attention.

Sadly, even with the quick response, the young man passed away.

While a cause of death has not been released, Palfreyman being one of multiple sudden deaths among relatively young Canadians has led to speculation about whether the experimental COVID-19 vaccines played a role.

Prominent Toronto Sun journalist Joe Warmington noted on social media that the GOJHL, like many other sports leagues in Canada, required all players to be “fully vaccinated” against COVID last year, despite the fact that young men in particular are at minimal risk of serious outcomes due to the virus while being at heightened risk of severe adverse events such as myocarditis from the jabs.

LifeSiteNews has likewise produced reports of other relatively young Canadians dying during or following physical activity, including a 50-year-old doctor who died while running and a 27-year-old pediatrician who died after collapsing during a triathlon.

While mainstream media and health authorities have largely ignored such events, many other doctors have been sounding the alarm about the safety of the novel mRNA jabs since their rollout.

It is also noteworthy that despite the shots having “approval” from the likes of Health Canada, all currently available COVID-19 vaccines are experimental, with clinical trials not set for completion until 2023.