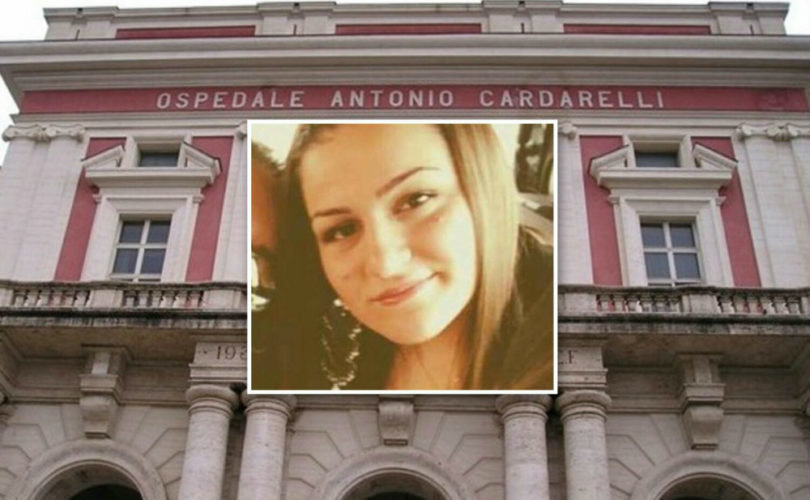 NAPLES, Italy, January 19, 2016 (LifeSiteNews) – An Italian woman from the city of Naples has died during a surgical procedure to kill her unborn child for fear that he or she might be deformed, according to Italian media sources.

Gabriella Cipolletta, 19, who was impregnated out of wedlock, was urged by local physicians to kill her child after her pregnancy was discovered during the course of a medical treatment that can cause fetal malformation.

Cipolletta was taking a medicine to treat fungal skin infections at the time, and gynecologists whom she consulted informed her that she had a 50% chance of giving birth to a deformed child, according to her mother.

After informing her that her child was likely to be deformed, Cipolletta's physician encouraged her to have the abortion, telling her that “you are young and you will have many beautiful and healthy children, don't worry,” in the words of the newspaper Il Messaggero.

Although her mother opposed the idea, Cipolletta reportedly persuaded her to trust the doctors, reassuring her that she would soon make her a grandmother, Il Messaggero reports. She entered the Cardarelli di Napoli hospital on January 12 to receive the abortion. However, after the procedure began, Cipolletta began to hemorrhage. The doctors sent her to intensive care, and she received multiple blood transfusions, but physicians could not find the source of the bleeding. She went into shock and died with her child, who was at eleven weeks of gestation.

Cipoletta's parents are enraged and have demanded an investigation of the doctors. “They've killed my daughter, they have destroyed my family and everything that we have done to construct it,” she told reporters. The Italian minster of health, Beatrice Lorenzin, has sent two inspectors to evaluate the case and determine if the doctors are guilty of malpractice.

While the town has erupted in mourning and lamentation, the staff of the Italian news service Notizie Pro-Vita (Pro-Life News) has noted that the unborn child, who was killed by the abortion, has been totally forgotten.

“In the commentaries regarding the family drama in Napoli, there is one person who is left unmentioned: the child whose elimination was sought, and who was killed together with the mother. Does no one reflect on this so very small and defenseless one?” the editors ask.

Abortion campaigners assault on conscience in Italy based on ideology, not facts: pro-life lawyers