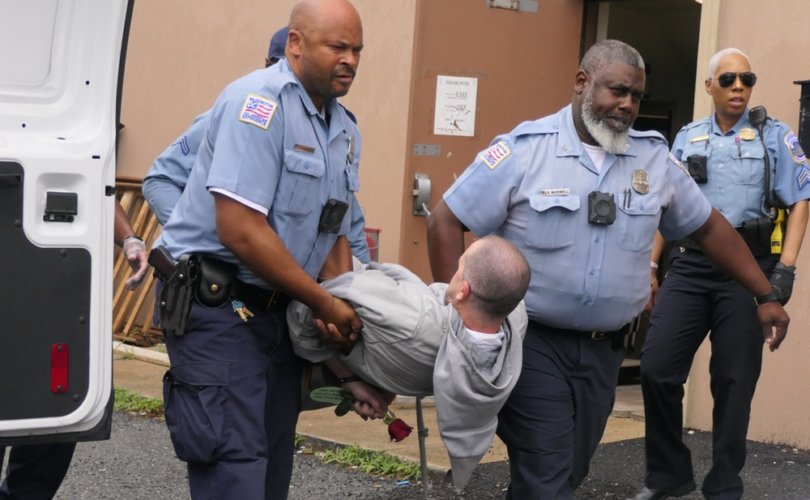 WASHINGTON, D.C., July 24, 2018 (LifeSiteNews) – Two Catholic priests and two pro-life activists were arrested for refusing to leave an abortion facility this morning, where they distributed red roses and begged the mothers inside to choose life.

Father Fidelis Moscinski of the Franciscan Friars of the Renewal, Father Dave Nix of the Archdiocese of Denver, Will Goodman, and an unidentified woman entered Capital Women’s Services, the abortuary operated by Steven Chase Brigham at 6323 Georgia Ave NW, Suite 210 shortly after 9:00 a.m.

They were inside for roughly two hours, and then, because they refused to cooperate with the police on scene, were carried out one by one. Goodman and Fr. Nix eventually stood up to get inside police cars; Fr. Fidelis and the unnamed woman, who goes by “Baby Jane Doe” in solidarity with aborted children, were both limp as officers loaded them into police vehicles. “Baby Jane Doe,” who participated in a May 26 Red Rose Rescue at the same facility, will not give her name to the police. After her last arrest, the charges against her were dropped and she was released from police custody without ever revealing her name.

The priests and activists were conducting what they call a “Red Rose Rescue,” inspired by Canadian pro-life activist Mary Wagner.

Today’s rescue was scheduled to coincide with the sentencing hearing of two other pro-life activists, Julia Haag and Joan McKee, for their December 2, 2017 rescue at Capital Women’s Services. They were sentenced to 18 months of unsupervised probation with the stipulation that they do not trespass at that abortuary again.

Then, President Clinton signed the Freedom of Access to Clinic Entrances (FACE) Act, which makes it a federal crime to physically block women from obtaining abortions, forcing the pro-life movement to switch tactics.

So far, no one in any of the eight Red Rose Rescues in the U.S. has been charged with violating FACE, although some rescuers have spent time in jail. Pro-lifers have been arrested at all of those rescues but one.

It was Fr. Nix’s first Red Rose Rescue, but Goodman, Fr. Fidelis, and “Baby Jane Doe,” had all been arrested rescuing before. Goodman was arrested for his role in a Red Rose Rescue in Michigan on June 1, 2018; Fr. Fidelis has participated in a rescue at Capital Women’s Services and one in Alexandria, Virginia.

As their comrades risked arrest, disrupting the abortuary’s daily operations and witnessing to the women inside, roughly 15 pro-life activists stood outside the abortion center praying in pouring rain. Among that group were veteran Red Rose Rescuers Dr. Monica Migliorino Miller of Citizens for a Pro-Life Society, Father Stephen Imbarrato of Priests for Life, Lauren Handy of Mercy Missions and the Gloria Dei apostolate, and long-time pro-life activist Joan Andrews Bell.

Red Rose Rescues will continue “until the end of pre-born child killing,” Fr. Imbarrato told LifeSiteNews. “That’s without a doubt.”

The priest noted Brigham “has lost his license in six states.”

The pro-life watchdog group Operation Rescue has dubbed Brigham “the worst abortionist in America.” In 2012, he was charged with murder, but those charges were dropped because the state couldn’t prove five murdered babies had been killed in Maryland.

Police found the bodies of 35 aborted babies at an illegal late-term abortion facility Brigham was running. Some of those babies were as old as 36 weeks gestation.

Brigham has a history of harming women, medical license revocation, and being forced to shut down filthy facilities. The New Yorker even profiled some of Brigham’s offenses in a 2014 piece about his “chain” of unsanitary abortion centers.

It did not appear that Brigham was at the facility today, but Fr. Imbarrato said it was likely another abortionist, possibly Myron Rose, was.

Capital Women’s Services shares a building with a D.C. Department of Health office.

Miller, who this summer served jail time for just over a month alongside Goodman after they violated a judge’s probation terms that they stay 500 feet away from every abortion center in the U.S., told LifeSiteNews it was “edifying” to see Catholic priests witnessing for the lives of pre-born babies in such a strong way.

“Fifty percent of the people who are willing to defend the unborn are ordained Catholic priests,” she said of the day’s activities. And “babies here had two hours of someone defending them.”

“We believe in the Red Rose Rescue that love doesn’t have a boundary,” Miller explained. “There’s no boundary line. The abortion clinic  – they’re the ones that draw those boundaries. Our love has to go past that boundary. The women are sitting there, ready to get their abortions – this is a peaceful, loving act of charity on behalf of those moms and on behalf of their innocent unborn children. And all I can say is that they deserve this defense and we hope to continue to give them the defense that’s involved with Red Rose Rescues.”