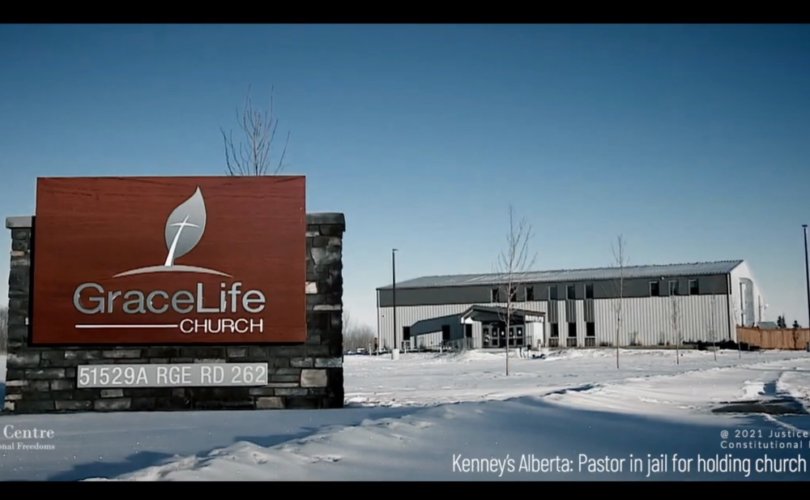 “While Premier Kenney was sending out his Ash Wednesday greetings, Pastor James Coates was locked up in an Alberta prison for exercising his charter freedoms of conscience, religion, association, expression, and peaceful assembly,” says John Carpay, president of the Justice Centre for Constitutional Freedoms (JCCF), in the video called “Kenney's Alberta: Where a Pastor is in jail for refusing to stop attending and holding church.”

The JCCF video details events surrounding Coates’ arrest and his subsequent incarceration for ministering his Christian faith contrary to COVID health rules. Coates is the pastor of Grace Life of Spruce Grove, Alberta, and both he and his church are being represented by the JCCF.

Kenney went on to claim that he is protecting “fundamental freedoms of religion” in his province, even though Coates remains behind bars.

In the interview, Smith pressed Kenney regarding the jailing of Coates, pressuring him about bail conditions that state he agree to not practice his faith.

“Do you know it’s against the criminal code to obstruct a clergyman? I’m reading section 176. So, who's guilty here,” Smith said to Kenney.

Kenney claimed to Smith that no person in Alberta is “obstructed from leading their congregation in worship in Alberta.”

Smith retorted, “Hold on, Premier. He’s in jail and he was not released because the provision of the court was he had to agree not to go back to his church. That is standing in the way of this 176 provision in the criminal code.”

Section 176(2) of the “Criminal Code of Canada” bans the interrupting or disturbing of a religious worship service.

Coates and Grace Life have said the frequent inspections by AHS officials could be “a potential criminal offense,” pursuant to the 176 provision.

During the interview with Smith, Kenney also was critical of Coates’ last sermon before being jailed on February 14.

Coates’ sermon took aim at government-imposed COVID-19 restrictions in Alberta, saying he refuses to “give the government what isn’t theirs,” and that they have “no jurisdiction” to tell churches what to do.

About Coates’ last sermon, Kenney for his part said in his interview with Smith that Coates is irresponsible for delivering “libertarian sermons” during COVID-19, noting that he would not get involved in what he considers to be a “legal case.”

On Sunday, February 14, Coates held a church service in violation of a January 29 order by Alberta Health Services (AHS) demanding that the church doors remain shut. It was shortly after this date he was jailed.

He has been detained at the Edmonton Remand Centre, awaiting trial since February 16, after refusing to agree to bail conditions.

Last week, an Alberta judge set May 3-5 trial dates for Coates, meaning that he could remain behind bars for two months while awaiting trial, which his legal team says is unacceptable.

JCCF lawyers were successful in obtaining a court date of March 4 to appeal Coates’ bail conditions after announcing last week that they would do so.

The JCCF video also highlighted a recent protest at the jail in Edmonton where Coates is located that was attended by the pastor’s wife, Erin Coates. She told everyone to “open your churches.”

Also included in the JCCF video is a clip of an impassioned speech by Aylmer, Ontario, Church of God Pastor Henry Hildebrandt, who made the trip to Edmonton to be at the protest in support of Coates.

“In the communist country of Cuba, churches are open, and we are jailing our pastors? What is happening!” said a passionate Hildebrandt to those gathered at the jail.

The JCCF video finishes with a clip of Coates’ last sermon before being jailed, where he said that it’s not up to the government to protect “us from a virus” but to uphold “God-given rights.”

As for Kenney, he recently released a statement regarding the jailing of Coates, saying his imprisonment is “unfortunate,” but Coates had “flagrantly” violated COVID rules.

“I know how important faith is to many people’s lives. So I want to be absolutely clear: Alberta’s government will always respect and protect the fundamental freedoms of religion and worship, period,” wrote Kenney in a post on his Facebook page shortly after Ash Wednesday.

However, in a letter sent to Kenney, Carpay said Coates was essentially “jailed” for holding a church service.

The JCCF letter addressed to Kenney demanded that Alberta’s COVID orders be scrapped and Coates be released at once.

“The Charter envisions a ‘free and democratic’ society. Under your permissive watch, (Alberta Chief Medical Officer of Health) Dr. (Deena) Hinshaw has been permitted to turn Alberta into a police state where neither freedom nor democracy are apparent. It is past time for the Alberta legislature to review all of Dr. Hinshaw's Orders. And it is far past time for your government to cease its religious persecution,” wrote Carpay in his letter to Kenney.

LifeSiteNews asks its readers to take the time to defend the religious liberty of Canadians by filling out our VoterVoice Alert to free Pastor Coates.