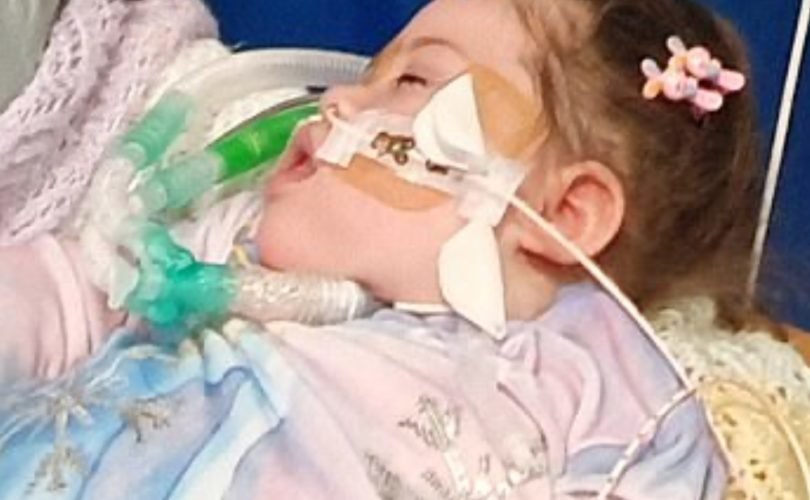 LONDON, England (LifeSiteNews) – Two-year-old Alta Fixsler, the girl at the centre of a years-long court battle over her right to life, has died in a hospice.

Following an effective death sentence handed down by a British High Court in May, a raging legal battle to save Alta’s life concluded this month, all possible legal recourse exhausted. Her last battle was to be granted permission to have her life-support removed at home, rather than in a hospital or hospice. Even this small mercy was withheld.

On October 18, just over an hour after having her life-saving treatment removed, Alta died in a children’s hospice.

“Sad news, little Alta Fixsler’s life support was turned off this afternoon and she died at the hospice with her parents by her side,” a family spokesman said in a written statement.

Alta was 8 weeks premature when she was born in December 2018. She suffered from severe brain damage at birth as doctors spent around 10-15 minutes resuscitating her. Since then, Alta remained on mechanical ventilation and received 24-hour, life-sustaining care at a hospital under the operation of the Manchester University National Health Service (NHS) Foundation Trust in England, during which time she grew and developed.

In May 2021, however, hospital staff advised her parents that Alta, then 2-years-old, would not recover from her condition and, even with round-the-clock care, might only live another two or three years. Doctors added that, in their opinion, “[t]he burdens of treatment are going to produce pain and suffering” for Alta, and that her “quality of life is severely limited.”

Alta’s parents objected, wishing to continue treatment for as long as their daughter might live, even if only a short while. They received expert advice that Alta does not suffer much, if any, pain at all. Unwilling to acquiesce to the Fixslers’ wishes, however, the NHS Trust subsequently fought at the High Court to have the support removed.

In his May 28 decision on the case, High Court Judge Mr. Justice Alistair MacDonald noted that doctors had argued it would be in Alta’s “best interests” to die by withdrawing what he admitted was “life-sustaining treatment (including artificial ventilation).”

Alta’s parents insisted that condemning their child to die was not only against their wishes as those who had brought Alta into the world, but abhorrent to their Orthodox Jewish faith, which upholds the sanctity of life. They showed that hospitals in Jerusalem were willing to receive Alta in order to continue her treatment at no expense to the British public purse and argued that they should be allowed to transfer their daughter.

Ultimately, MacDonald declared that “no medical benefit” could be found in Alta being taken to Israel, adding that further care provides “no prospect” of recovery. The judge therefore ruled, in line with the opinion of Manchester NHS doctors, that it was in the child’s “best interests for the treatment that is currently sustaining her precious life now to be withdrawn” on May 28 and instead suggested that “a palliative care regime be implemented,” again insisting that this “is in her best interests.”

The British courts do not consider the removal of life support from brain-injured people who cannot breathe, eat, or drink without medical assistance to be euthanasia.

The Fixslers’ subsequently contested the decision at the Court of Appeal on June 23, but MacDonald’s decision was upheld in a ruling handed down on July 9, in which judges said they were “entirely satisfied” that ending treatment, rather than receiving full-time care in Israel, was in Alta’s “best interests.”

In a last-ditch attempt to save their daughter’s life, Alta’s parents took their petition to the European Court of Human Rights, but the court refused to intervene, leaving all legal avenues exhausted.

An advisor representing the Fixsler family, Pinny Kellner, told Israel National News earlier this month that Israel’s government had an opportunity to intervene using specific diplomatic processes to aid the Fixsler family, since Alta and her parents were all citizens of that country. Kellner added that, while members of the government could have helped, they seemed to have been “dragging their feet.”

MacDonald ruled that a hospice “best accommodates Alta‘s welfare need for specialist care at the end of her life under a reliable, safe and sustainable system of high calibre care protected from disruption, whilst allowing, in so far as possible and consistent with Alta’s best interests, the family and the community to perform the sacred religious obligations of the Orthodox Jewish faith.”

According to their spokesman, the Fixsler family argued in response that “making life-changing decisions on behalf of children ought to be a parental right, and it is important that we open up the debate around this. We call on the government to look at the current legislation and change it.”

Alta’s case is not the first of its kind in Britain. Recent years have seen a slew of tragedies involving disabled children whose chance at living was taken from them by the courts.

International attention was given to Charlie Gard and Alfie Evans, both of whom suffered debilitating disorders and whose opportunity for treatment overseas was inhibited by legal intervention.

Evans, like Alta, suffered brain damage and was on life-support at a Liverpool hospital when doctors declared that it was in the boy’s “best interests” to remove his ventilator. The Bambino Gesù hospital Rome had been willing to receive Evans for treatment, and the Italian government had even granted emergency citizenship to aid the transfer. However, a judge declared that he could not fly out to Rome; Evans’ ventilator was removed that day.

He was able to breathe on his own for some time without medical assistance, dying four days later.

Gard, too, was denied access to care by the British courts for the rare mitochondrial disease from which he suffered. His parents, Chris Gard and Connie Yates, raised more than $1.5 million to transfer him to the U.S. for experimental treatment. But Great Ormond Street Hospital (GOSH), where he was being treated, thought Charlie’s life support should be pulled against his parents’ wishes.

For months, the hospital argued in court against the rights of Charlie’s parents to decide their son’s course of care. English and European courts ultimately ruled that the hospital could block his parents’ wishes and pull Charlie’s life support.

Despite public pressure on the hospital from world leaders like Pope Francis and then-President Donald Trump to allow Gard to leave the hospital to receive care in the United States, GOSH removed his ventilator on July 28, 2017. Gard died later the same day.