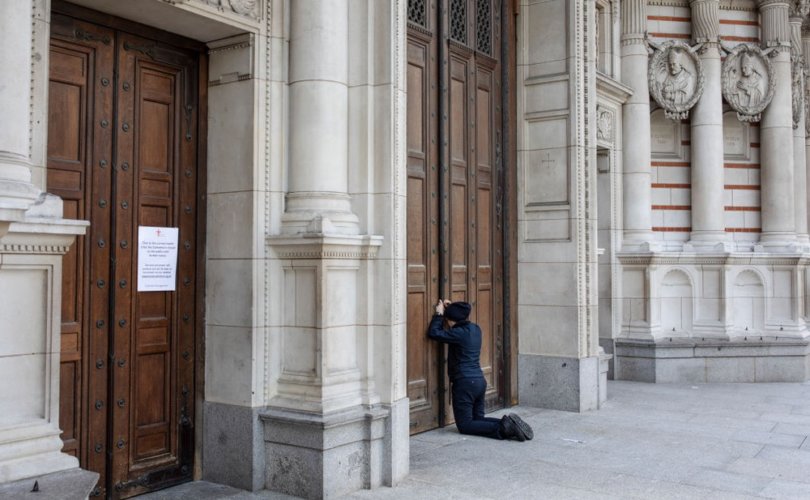 A woman prays in front of a closed Westminster Cathedral on April 12, 2020 in London, England. Dan Kitwood / Getty Images

The Daily Telegraph reported yesterday that the MPs had just delivered the letter to Johnson. Led by Conservative MP Sir Peter Bottomley, the lawmakers pointed out the absurdity of people being allowed to go to busy supermarkets for food and drink or to crematoria for funerals, but not to mostly-empty churches for private prayer.

“Weddings (whether in the church porch or inside), christenings and other services are wanted safely and soon,” the MPs wrote.

“Ten can gather in a crematorium, yet one cannot be in a church.”

According to the British government’s current plans, churches in England are scheduled to open July 4, at the same time as pubs and movie theaters. However, as the Telegraph noted, even then there may be a delay in opening these meeting places as it is believed maintaining “social distancing” within them may prove difficult.

In their letter, the MPs voiced strong opposition to the possibility of extended church closings and stated that “everyone understands the value of appropriate social distancing and the obligation to avoid contamination.”

The MPs referenced a Catholic priest who had asked them to exert their influence on behalf of the faithful.

“I ask you to put pressure on the government for private prayer as soon as possible,” the priest had requested.

“Two-metre distancing is easy (easier than in a supermarket) and sensible hygiene precautions can quickly put in place,” he added.

“It seems odd that you can go for a walk, enter a busy supermarket, get on a bus, but cannot go to a large virtually-empty-for-much-of-the-time building.”

According to the Telegraph, the MPs who signed the letter also added a request that their leaders in the “government and church, especially the Church of England, together find reasonably safe ways to reopen our churches for prayer, for funerals even with limited congregations and for worship sooner than July.”

On Monday, May 11, the Catholic Bishops Conference of England and Wales (CBCEW) published a statement objecting to the British governments’ plans to keep English and Welsh churches shut until July.

“The timing and the manner of the opening of churches touches profound sensitivities and spiritual needs,” they wrote.

“The government’s document and statements fail to recognise this.”

The CBCEW stated that, in the course of talks with the government, it had “already submitted a detailed plan, in full accordance with public health guidelines, for churches to be opened for private prayer.”

“The Church is ready to play its full part in the task force, understanding that this includes the possible earlier use of churches for private prayer, as a first safe step towards their use for public worship,” they continued.

This was a reversal of the CBCEW’s original stance on the issue of private prayer in churches. After their March 20 moratorium on public Masses, the Bishops in England and Wales took the additional step of locking church doors on laypeople seeking to pray privately before the Blessed Sacrament.

They did so despite the directive of the Ministry of Housing, Communities & Local Government that “places of worship should remain open for solitary prayer.”

On March 23, the Westminster diocese revealed that Jim McManus, vice-chair of the CBCEW’s Health Reference Group, had spoken to a senior civil servant to convince the British government that it was mistaken to allow places of worship to remain open for solitary prayer.

“It was quite clear they just had not thought through the issues of infection and security of churches and when he made these points clear, they were appalled and agreed they had made a mistake,” the diocese’s statement said.

“Keeping churches open sends an utterly inconsistent message and therefore they must be closed for the benefit of others and stopping infection.”

Since then, Catholics in the episcopate and laity have been divided on the subject of when and whether or not their churches should be opened. In a letter to concerned laypeople, Cardinal Vincent Nichols said it would be a “scandal” to open the churches. However, Bishop Philip Egan of the Diocese of Portsmouth publicly questioned the necessity of church closings after seeing that supermarkets, other shops, some workplaces, and some synagogues and mosques remained open.

After a group of Catholic faithful from around Britain produced a video asking for the churches to be opened to private prayer, Bishop John Keenan of Paisley asked Scottish Catholics what they wanted. Many of his respondents called for the churches to reopen, but many others indicated that they preferred the churches to remain closed until they could be certain of safety.