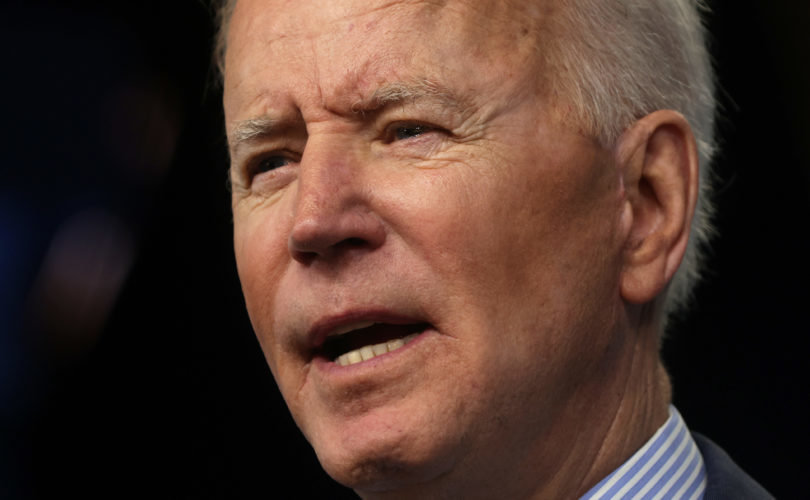 A group of 10 states filed a lawsuit Friday against an executive order last month that strictly mandated the experimental COVID jab with no testing option for all federal contractors, including millions of employees of private businesses that work with the government.

The initial deadline for compliance was December 8, though the White House partially eased requirements Monday amid pressure from business leaders during the ongoing supply chain crisis.

The 10 states’ lawsuit, filed with a federal district court in Missouri, argues that the Biden administration violated several U.S. laws, the separation of powers, and the 10th Amendment by requiring that contractors get vaccinated.

“Congress did not delegate the authority to dictate vaccine and mask mandates on federal contractors — which would include agencies and political subdivisions of States — to the President or [the Office of Budget Management],” the states said, calling the mandates a “power grab … sweeping in its scope.”

“Indeed, consistent with the non-delegation doctrine, Congress likely could not have validly delegated such sweeping and indeterminate authority, with enormous potential impact on the U.S. economy, to a single federal agency — and certainly could not have done so without an extremely clear statement of congressional intent.”

The Office of Budget Management “failed to consider the fact that its actions were contrary to law, as they were not authorized by the Procurement Act, the Procurement Policy Act, federal RFRA, or any other federal statute, and were also unconstitutional, as the Guidance violates the Tenth Amendment and was premised on an unconstitutional Executive Order,” the states added.

The complaint additionally slammed the Biden White House for not considering “the effect of large-scale resignations of unvaccinated employees of federal contractors, especially in an economy already experiencing high levels of inflation, labor shortages, and a supply-chain crisis” and “the effect this would have on the States.”

Minority workers with low vaccination rates will be particularly impacted by the vaccine mandate, which does not exempt contractors who work remotely or have natural immunity, the suit noted.

The 10 states who joined the lawsuit – Alaska, Arkansas, Iowa, Missouri, Montana, Nebraska, New Hampshire, North Dakota, South Dakota, and Wyoming – asked the U.S. District Court for the Eastern District of Missouri to declare Biden’s mandate unconstitutional and to block the administration from enforcing vaccination and masking requirements for federal contractors.

Seven other Republican states brought another challenge against the White House on similar grounds yesterday. That lawsuit, led by Georgia, includes Alabama, Idaho, Kansas, South Carolina, Utah, and West Virginia, and calls for a permanent injunction to halt the contractor mandate.

At its core, the mandate forces contractors to make an impossible choice: either (1) take enforcement action that may include termination of all unvaccinated employees, (2) face losing billions of dollars in federal funding. And because the administration has already amended the guidance multiple times, there is no telling what other onerous obligations may put state agencies in breach at a moment’s notice.

“Specifically, absent an injunction, Plaintiffs’ operation will be jeopardized as a result of Defendants’ adoption and implementation of the unconstitutional, illegal, and logistically unworkable Contractor Mandate,” stated the lawsuit, filed with a federal court in Augusta, Georgia.

Under my Executive Order no Texan can be forced to take the vaccine shot.

Biden's order should be ruled illegal.

Thanks to @KenPaxtonTX for the lawsuit.https://t.co/877k3zuzC4 via @TexasTribune

“Just because you’re a business that does federal contracts, it’s not right for the federal government to come in and rewrite those contracts and then try and shoehorn this in,” Florida Gov. Ron DeSantis said Thursday.

Florida is suing the Biden Administration over its mandate on federal contractors that is unlawfully jeopardizing thousands of jobs.

No one should lose their job due to these mandates.