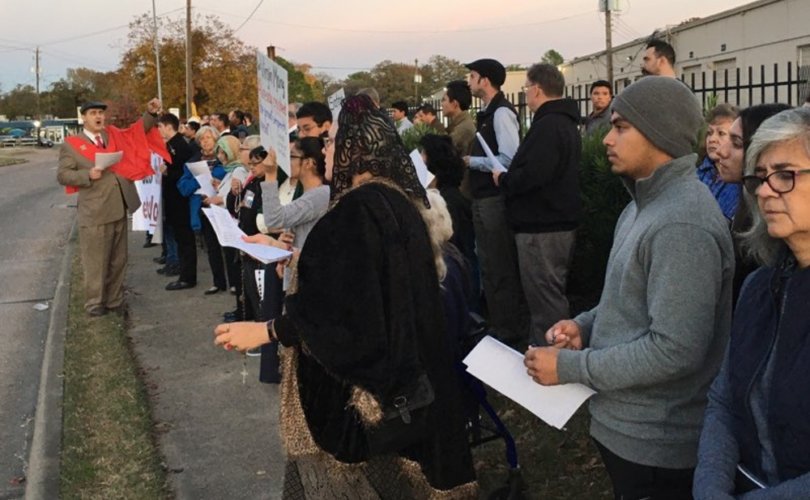 Catholics pray the rosary on Saturday outside Brash Brewery, where a satanic black mass was to take place later in the evening.Karen Pomes

HOUSTON, Texas, November 26, 2019 (LifeSiteNews) – Catholics prayed the rosary outside a brewery in Houston Saturday while Satanists held a sacrilegious black mass inside.

Catholic blogger Chris Walker told LifeSiteNews that approximately 200 Catholics including at least one priest prayed the rosary outside the craft brewery in the late afternoon, while a smaller group stayed on to midnight to make reparation and pray as the black mass took place. The Catholics came from at least five parishes in the Houston metro area and the American Society for the Defense of Tradition, Family and Property (TFP).

The 50 tickets to the black mass were sold out by Friday. Organizers of the event promised that the Satanic Temple of Houston would hold its “first public ritual” in the region. Brash Brewery, where the event was hosted, was kicking off the release of its “Black Masses” beer. The black mass reportedly marked the end of an animal welfare campaign by the Houston satanists.

The black mass is a blasphemous mockery of Catholic liturgy and typically involves the desecration of a consecrated Host, which the Church teaches is the literal body, blood, soul, and divinity of Jesus Christ.

Houston-area resident Karen Pomes told LifeSiteNews that upon arriving at the scene, she and others observed that a man dressed in black was riding a horse along the median dividing the street between the rosary group and the Brash Brewery. The rider waved a large black banner as he rode along the median until police arrived. He then retreated to an alley near the brewery. Pomes said that she later saw a woman and a child emerge from the brewery, while adults dressed in black shouted “Hail Satan!” and various epithets.

Those present at the rally recited the Prayer to St. Michael, which Pope Leo XIII called Catholics to pray after Mass. The prayer begs the archangel to defend Christians against the “wickedness and snares of the devil,” and to thrust into hell “Satan and all evil spirits.”

These are warriors !!! My Catholic brothers went out at 11 pm to pray across the street from Brash Brewing during the Black Satanic Mass !! Super proud of you guys !!! pic.twitter.com/wSPe5TpYxs

Adoration of the Blessed Sacrament was offered at Regina Caeli parish of Houston, an apostolate of the Priestly Fraternity of St. Peter (FSSP), an order of priests who offer the Traditional Latin Mass. Fr. John Kodet, FSSP of Regina Caeli was among those at the rosary rally.

In an interview, Pomes said that she received harassing phone calls before the rally from people identifying themselves as Satanists.

On social media, Satanists mocked Catholics’ concerns over desecration of the Blessed Sacrament. One post by Satanists referred to the rosary rally as “hysteria.”

Some defenders of the Satanists claim that their black masses and other events, such as erecting statues of Baphomet – the goat-headed false deity adored by adherents of occult groups – in public places are merely satirical.

The Satanic Temple of Houston proclaimed on Facebook: “The consecrated host was defiled, destroyed, and swept into the trash where it belongs.”

TFP spokesman John Ritchie told LifeSiteNews via email that a black mass is a “direct, deliberate and sinful act of hatred against God.”

Far from being satirical, Ritchie wrote, “Satanism is about spiritual destruction, falsehood, and darkness. No amount of positive spin can change that reality.”

Ritchie noted, moreover, “When we say ‘God bless America’ we really mean it. That means Satan is excluded, expelled, and not welcome. Because we will only prosper and flourish as a nation in the measure that we embrace truth, goodness and beauty.”

“The Black Mass is an attempt to rip God out of the fabric of our nation,” he added.

Ritchie fears that public Satanism is on the rise in the U.S. “The Satanic Temple,” he wrote, “has promoted public Black Masses, Satanic invocations, gravesite desecrations, pro-abortion and pro-homosexual efforts, Satanism in public schools, and attempted to set up statues of the devil on state property.”

“Society has two options: Truth or error. We can either stand with God or fall with Satan.”

The Satanic Temple is tax-exempt as a religious group in the U.S. The organization, which has chapters in more than a dozen states and Canada, is known for its abortion advocacy.